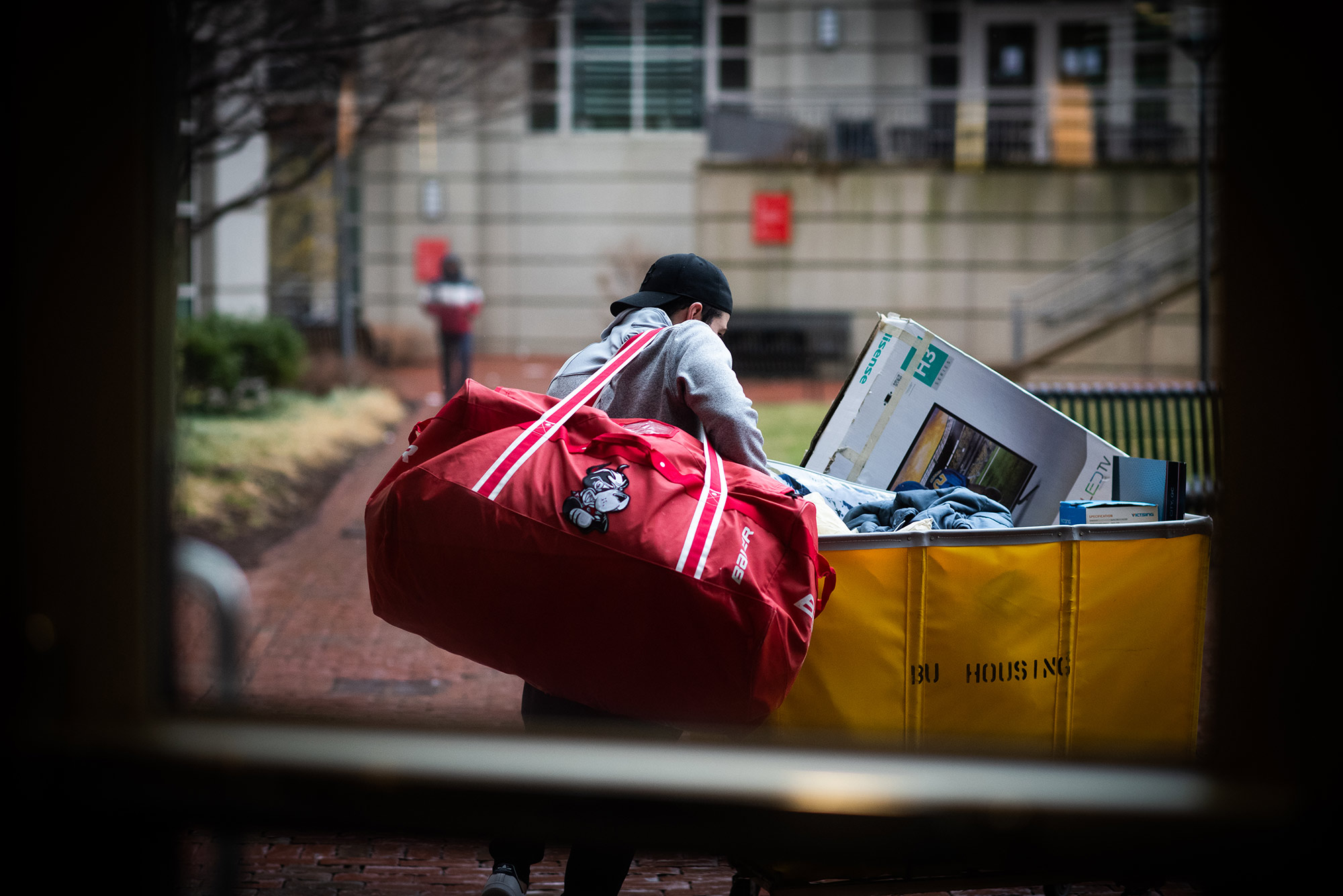 This Terrier moved out of StuVi I this week. BU is closing its residences to almost all students as it extends remote teaching and learning for the duration of the semester. Photo by Jackie Ricciardi

If you have a question or comment related to BU and its response to the COVID-19 crisis, on the subject of the move-out, remote learning, retrieving personal belongings, or anything else, please visit Boston University’s special COVID-19 website. Questions are being answered there by specific departments in a timely fashion. Thank you.
—Doug Most, executive editor, BU Today

Quote of the day:

This is clearly escalating at a very rapid pace. Up until last week, we were seeing a smattering of activity, but now it seems to be accelerating, which is what you expect in epidemics like this.

Stat of the day:

An email was sent to BU students Wednesday evening from the Office of Residence Life. Now that BU has extended remote teaching and learning through the semester and is closing residences to all but the most exceptional cases, here are the guidelines for students on and off campus:

For students who are not on campus, we advise the following – please do not return to campus. Your belongings are secure in your room and can remain there. Please log in to My Housing Portal and fill out the Personal Belongings Storage Information application. We will be in touch shortly to organize a conversation about shipping or storage at our cost.

For students on campus and moving out, we advise the following – please take only those essential belongings that you need and can easily carry with you when you depart. Your remaining items are secure in your room. Please log in to My Housing Portal and fill out the Personal Belongings Storage Information application, and we will be in touch shortly to organize a conversation about shipping or storage at our cost.

On campus, students who are moving out also have the option to work with our partner, the UPS Store, if they wish to box, store, or ship their possessions prior to departure.

For students who are awaiting a response to their appeal to remain on campus, the University will respond within 24 hours. Deep apologies for any confusion. As Dean Elmore mentioned in an earlier message, we will be flexible with your schedule.

Commencement decision due by next month

The decision on whether to hold Commencement will be made by the middle of April. President Robert A. Brown’s office issued the following information:

While the decision was just made to have all classes and examinations for the remainder of the spring semester held remotely, the decision regarding Commencement will be made no later than mid-April. This decision will be conveyed via email to advanced degree candidates, graduating seniors, and their parents.

We hope that you stay safe and healthy. Please let us know if you have any questions.

Rhett, the governor’s on the phone…

“The emptying out of the dorms creates opportunities as potential overflow space and space for healthcare workers and the like,” she said at Governor Charlie Baker’s daily press briefing Wednesday. “It has been on our list of opportunities.” Asked whether schools are cooperating, she said, “Universities are a part of our planning process.”

Boston and Beyond News

The flood of COVID-19 patients begins

Hospitals have been shearing nonemergency care from their schedules to prep for that anticipated flood of coronavirus patients, and in greater Boston, it has begun.

Massachusetts General Hospital reported a quadrupling of suspected cases   among patients in its beds or ER between Monday and Tuesday. That’s not including six confirmed cases.

The Beth Israel Lahey Health system has confirmed 3 COVID-19 cases and suspects more than 200 more among its dozen hospitals, the Boston Globe reports. Brigham and Women’s Hospital has 2 confirmed patients and was awaiting tests on 16 more, according to the newspaper.

“The numbers from individual hospitals,” the Globe writes, “suggest the official number released daily by the state is likely to increase significantly in the days ahead.” That official number stood at 256 Wednesday night.

President Trump, meanwhile, said he would invoke the Defense Production Act, a Korean War–era law that allows him to order ramped-up industry production of anti-coronavirus supplies, like masks, gowns, and gloves, to help stretched-thin hospitals.

Governor Charlie Baker has ordered all family childcare providers and early education centers closed as of March 23, save for exempt emergency providers serving “families of emergency personnel, medical staff, and others critical to fighting the COVID-19 outbreak.” (BU’s Children’s Center closed as of today until further notice.)

United States to turn away all asylum seekers, illegal entrants

For xenophobes and those with more legitimate worries about undocumented immigration, the coronavirus has achieved what Donald Trump’s stalled wall could not. His administration has announced that it will turn away all asylum seekers and those trying to enter the United States illegally from Mexico.

The administration cites the need to prevent COVID-19 spread in detention centers and to border patrol agents. Under the policy, ports of entry, designated for people to enter the country legally, will still receive American citizens, holders of green cards, and documented foreigners.

People attempting to enter illegally from Mexico between ports of entry will be turned away without being detained and without due process, the New York Times reports.

The southern flank isn’t the government’s only focus. Trump tweeted that he and Canada have agreed to close that border to “non-essential traffic.”

The decision tightens Canadian Prime Minister Justin Trudeau’s earlier restrictions on entry to his country, which permitted only Canadians, permanent residents, and Americans, and only on condition that they self-isolate for 14 days.

The American exception, Trudeau had said, recognized “the level of integration of our two economies.” Canada accounts for almost one-fifth of US exports.

University of Toronto historian Robert Bothwell told the Associated Press that banning nonessential visits wouldn’t be hard, given reality: “Tourism in the age of the coronavirus is a contradiction in terms. And no Canadian in his or her right mind would want to be caught with the virus on the US side of the border, given the predatory US medical pricing system.”

US coronavirus deaths passed the 100 mark, hitting 115 as of late Wednesday. That happened as the country marked another milestone: the virus has now spread to all 50 states and Washington, D.C.

West Virginia became the last holdout late Tuesday, reporting its first case. Washington state has had the most deaths, with at least 54. New York has the most cases, with at least 1,374. Three US territories also have coronavirus cases.

Governments are vowing to spend trillions—the Trump administration alone wants $1 trillion—to prop up the global economy against the pandemic’s body blow. Normal rhetoric about fiscal restraint was shelved in the wake of numbers—more than 200,000 COVID-19 cases in at least 144 countries—and ghost-town photos of the streets and squares of major cities emptied of people.

Distraction of the day:

Countries on lockdown? Bans on crowds? Even so, this could be a culturally educational time for you and the kids, as a dozen world-famous museums—the British Museum, Amsterdam’s Van Gogh, and New York’s Guggenheim among them—are offering free virtual tours.

Find FAQs about BU’s response to the pandemic here. The University’s hotline for faculty, staff, students, and visiting scholars to call for referral of their virus-related medical concerns is 617-358-4990.