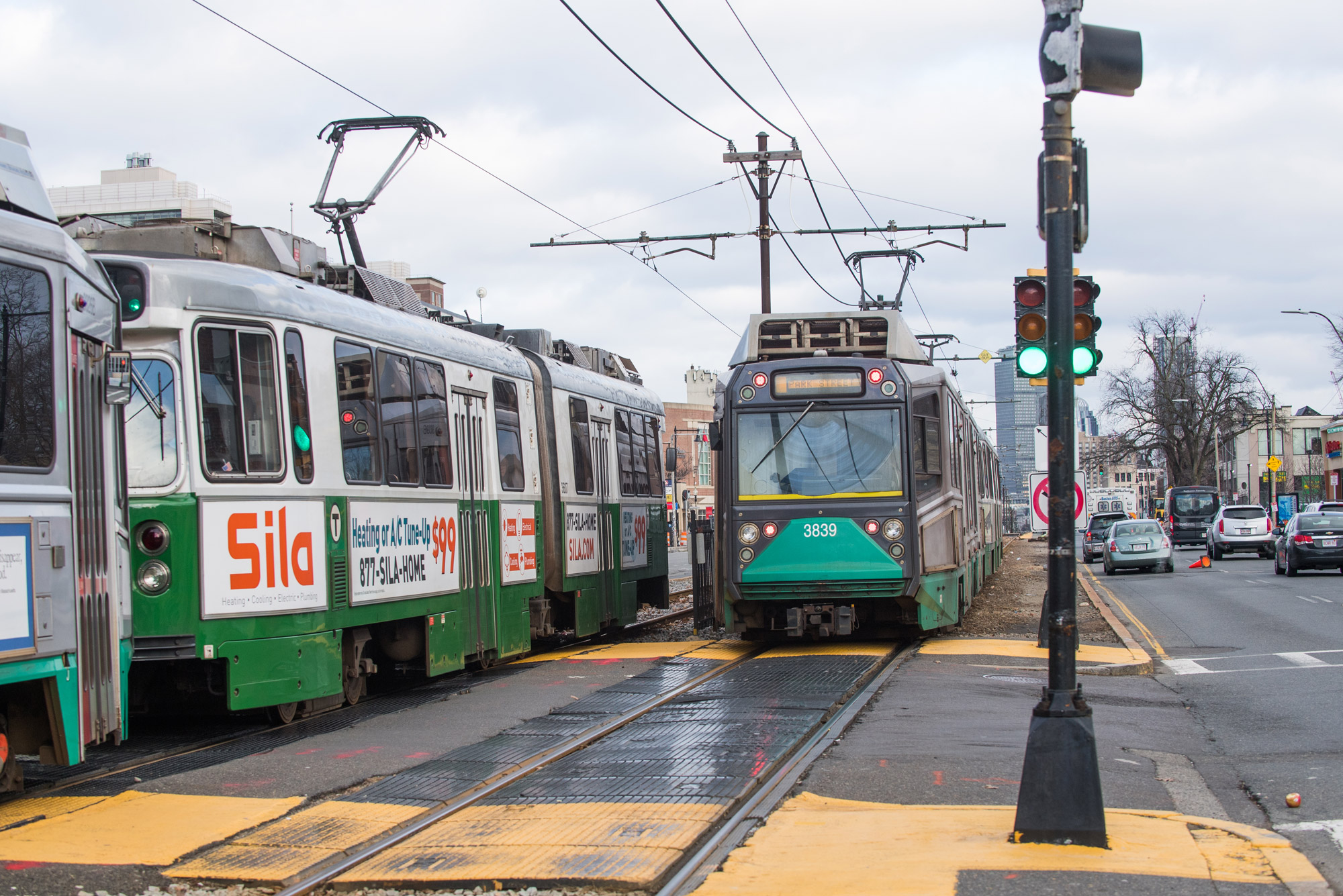 A three-expert panel slammed the MBTA this week for bumping safety concerns to the bottom of its priorities list. Photo by Jackie Ricciardi

Do You Feel Safe Riding the T?

New report says “safety is not the priority” for the MBTA, makes recommendations after multiple mishaps

“Safety is not the priority at the T, but it must be,” is the conclusion of a damning report released Monday by the MBTA that says the agency has prioritized budget issues and capital improvements over the safety of its 1.3 million daily passengers.

It’s a report that carries significant interest at BU, where the MBTA’s Green Line B trolley serves as the main artery through campus, carrying students, faculty, and staff to classes and jobs along a mile-long Commonwealth Avenue stretch, from Kenmore Square to Packard’s Corner. Approximately 160,000 people ride the Green Line daily.

The report, commissioned by the T in June following a Red Line derailment, notes that several accidents in recent years have “resulted in multiple injuries, millions of dollars in equipment damage and repair costs, significant delays, unpredictable service, and increased dissatisfaction amongst regional stakeholders and customers.” The panel says system inspections are neglected by a T safety department that’s “somewhat debilitated.”

A three-expert panel slammed the #MBTA this week for bumping safety concerns to the bottom of its priorities list. — Do you feel safe riding the T?

“While the agency performs the necessary core functions to be considered a relatively safe system, many aspects of the T’s approach to safety and operations need immediate attention,” the report states. “In almost every area we examined, deficiencies in policies, application of safety standards or industry best practices, and accountability were apparent.”

Here are the six key recommendations by the panel regarding how to make America’s oldest subway system (1897) safer:

Among the recent T accidents, a Green Line D trolley derailed in June near Commonwealth Avenue and Beacon Street, injuring 11 people. The T suspended the trolley driver, saying investigators had ruled out any equipment malfunctions. Coming during both a Red Sox double-header and Boston’s Pride Parade, the accident forced the T to replace the trolley with buses to carry its thousands of passengers that day.

That same month, a half-century-old Red Line train derailed at the JFK/UMass stop in Dorchester, an incident captured on video. That accident snarled commutes for days afterwards, turning the average Braintree-to-South Station ride from 25 minutes into a nearly hour-long ordeal.

The mishap, requiring repairs to equipment housing, signals, and switches damaged by the careening trolley, did not involve operator error.

Responding to the report’s release, MBTA general manager Steve Poftak says the authority has been working to improve safety and has already begun implementing many of the report’s recommendations. “This has been a constructive and collaborative process that focuses on the highest priority of the T, the Control Board, and the SRP: making the T a world leader in transit safety while we provide reliable, dependable, attractive service every day to our 1.3 million riders,” he says.

Do You Feel Safe Riding the T?

There are 4 comments on Do You Feel Safe Riding the T?

Do You Feel Safe Riding the T?
4
share this