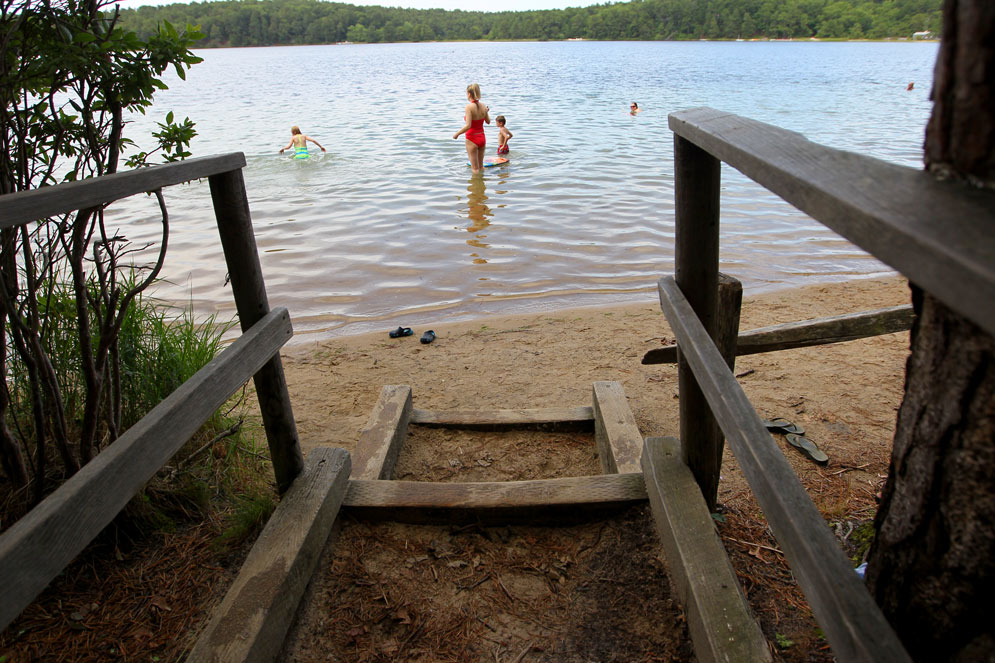 With much attention on protecting swimmers from sharks, worry is they’ll flock to the ponds instead

Portnoy, a wiry man in jeans and a gray woolen cap, has devoted much of his career to understanding and helping to protect the Outer Cape’s ecosystem and encouraging restoration of those parts of it that were damaged by human activity and development in the 19th and 20th centuries.

“I’ve seen a total of one shark in 40 years of surfing,” says Portnoy (GRS’96), who earned a PhD in biology at BU. “It was about 10 days before the attack. He nudged my friend’s paddleboard. We kept surfing. The waves were good.”

Portnoy and others here are less worried about the remote possibility of sharks harming swimmers and surfers than they are about the more immediate dangers posed to this fragile arm of land by a more aggressive species: humans.

Humans ignoring the National Seashore’s pleas to protect wildlife areas. Humans leaving plastic bags and litter where seagulls and seals can choke on them. Humans tossing their beach towels down on the delicate vegetation on the sandy shores of Gull Pond and the necklace of 19 other National Seashore kettle ponds that dot Wellfleet and Truro. Humans bringing their dogs to frolic in the ponds—and pose with them for Instagram—despite the signs clearly warning that canine visitors are prohibited during the season.

Humans, specifically the daytrippers, driving to the ponds, or with increasing frequency, arriving by Lyft and Uber.

“People don’t want to walk or ride their bikes to the ponds,” says Suzanne Grout Thomas, Wellfleet’s director of community services, whose job includes comanaging the town’s pond and ocean beaches with the National Seashore. “They want to drive their SUVs right to the pond and get out and swim.”

In the early 1880s, Henry David Thoreau explored these same ponds on foot, extolling their charms in his book Cape Cod (1885). And speaking of Thoreau, what Thomas doesn’t want, what no one here wants, is for these pristine spots to share the fate of the body of water in Concord, Mass., that Thoreau made famous: a place where summer overcrowding regularly forces park officials to temporarily close the beach. In a new study, researchers warn that swimmers should stop peeing in the pond—or else, says study coauthor Richard Primack, a College of Arts & Sciences professor of biology, the water may turn cloudy with algae.

Although Thomas hasn’t been there in years, Walden Pond “is a good example of what we don’t want to become,” she says.

Kettle ponds were formed some 11,000 to 13,000 years ago, when blocks of glacier ice melted, leaving massive holes that filled with freshwater. Designated as ecological, aesthetic, and recreational treasures by the Massachusetts Natural Heritage Program because of their biodiversity and rare plant species, Wellfleet’s kettle ponds are already showing the effects of global warming, with water temperatures rising more than three degrees in the last 15 to 20 years. Ecologists also worry that if they get too crowded, the shoreline vegetation and surrounding brush could be destroyed, causing erosion of soil into the remarkably clear spring-fed waters that make them so popular for swimming.

Thomas knows the freshwater, shark-free ponds may offer a tempting alternative for tourists who’ve become fearful of shark attacks, however rare, in the ocean.

“Try the kettle ponds,” a Cape-lover from New Jersey tweeted after last summer’s attack in a Twitter thread on the risk of encountering sharks in the ocean.

Every additional person takes a toll

Will significant numbers of ocean-lovers opt instead for the ponds this summer? Data are not available, but there are indications that the ponds did begin drawing more visitors after a shark bit a man off a Truro beach in 2012, says Stephen Smith, a National Seashore plant ecologist and a coauthor of a recent study that showed the ponds are warming.

“It’s all about protecting the ponds.”

How many more people can Gull Pond and some of the other more popular ones, which have been drawing increasing crowds in the past decade or so, handle? An increase at a single pond of only 5 or 10 people a day may not sound like much, but for a pond with a tiny beach and a delicate ecosystem, every additional person takes a toll.

“It’s going to be interesting to see how people are going to behave,” says Portnoy, a coauthor of the National Seashore’s Kettle Pond Data Atlas (2001), an 87-page ecological analysis and history of Gull and the other 19 kettle ponds.

Surveying Gull, he points out the low fencing around the shoreline vegetation, which is part of an ongoing National Seashore restoration project led by aquatic ecologist Sophia Fox (GRS’07,’08). “The vegetation is very sensitive to foot traffic,” Portnoy says.

“How do you impose a limit?” he asks. “There’s been a lot of talk about how to do that.”

Even the more remote ponds, the ones tucked away in the woods and unreachable by car, are no longer as hard to find as they used to be. “Now, people with GPS are finding them,” says Portnoy. “My wife and I walk a lot around the ponds. We meet people with GPS devices. They ask, ‘Is this Gull Pond or Slough Pond?’”

At her Wellfleet town office a mile or so away, Thomas says only a full season will reveal how shark fears play out at the ponds, and in the meantime, she’s taking steps against the Uber effect.

The effect, that is, of tourists from, say, Lower Cape towns like Orleans and Harwich ducking their ineligiblity for beach parking stickers (which are available only to residents and overnight visitors) by getting Uber and other rideshares to ferry them in ever-greater numbers to ponds like Gull and Long. 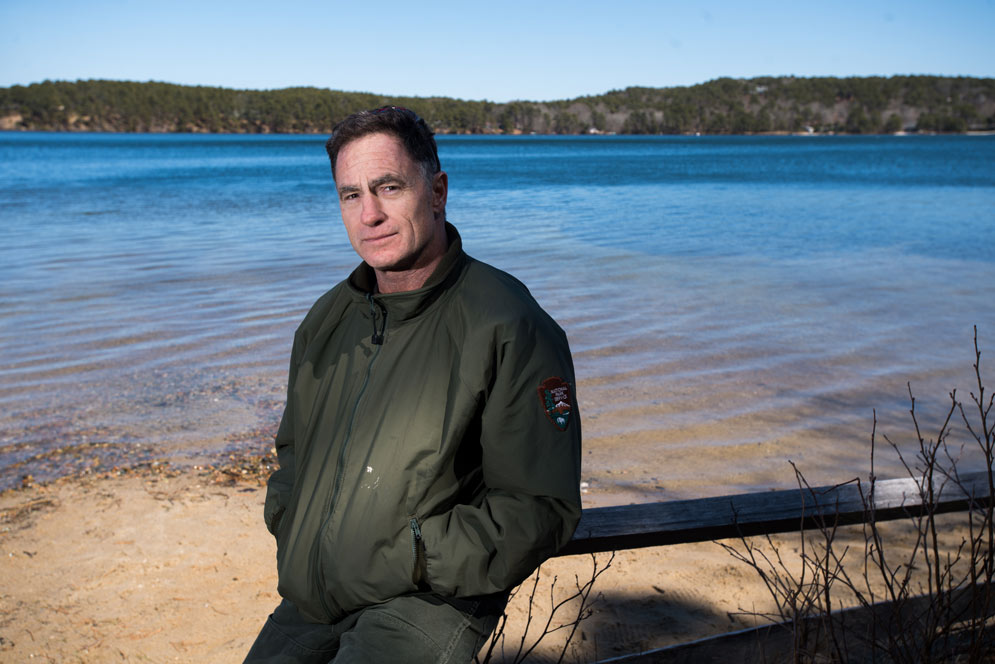 Stephen Smith, a plant ecologist with the Cape Cod National Seashore, says there are indications that more tourists began visiting the ponds in Wellfleet after a shark bit a man off a Truro beach in 2012. Photo by Cydney Scott

Thomas says she plans to go before the Wellfleet Board of Selectmen this spring to propose limiting rideshare drop-offs between 9 and 5 by having parking attendants at the ponds monitor such visitors—in a friendly way, of course.

“You can drop off Nana or your grandchildren,” she says. “I’m not trying to be a parking Nazi. I’m trying to limit it to people who know people who have a beach sticker. These people are paying the fees. They’re the taxpayers. They should have access—not people who are getting Ubers from Orleans.”

That may prove challenging. The most popular Wellfleet ponds—Gull, Higgins, Herring, Great, Long, Duck, and Dyer—are public, after all. That’s because they are “great ponds,” ponds whose surface area is 10 acres or larger, and all great ponds in Massachusetts are owned by the commonwealth (smaller ponds are owned by the shoreline property owners). Further assuring public access, all of Wellfleet’s great ponds lie within the boundaries of the Cape Cod National Seashore. With little direct involvement from the state in recent years, the National Seashore and the town share responsibility for managing the ponds. Managing humans is the biggest part of the job.

Thomas, whose grandfather taught her to swim in Long Pond when she was two years old, wouldn’t dream of trying to make them exclusive. She knows the ponds are part of Wellfleet’s appeal to visitors.

“It’s all about protecting the ponds,” she says.

She and other locals think there is another reason for the growing numbers of visitors discovering Wellfleet’s treasured ponds. “You can thank the New York Times for that,” Thomas says, referring to a 2003 article in the travel section by Constance Rosenbloom rhapsodizing about “Zen-like swimming in little seas of tranquility” and child-friendly ponds that are “like enormously large and beautiful bathtubs.”

“Thank you, Constance,” says Thomas. But then she shrugs. “It was happening anyway. She sort of pointed it out to everybody.”

Even now, with their limited parking—there are about 50 spaces at Gull—and with Thomas, other locals, and the National Seashore watching over them, the ponds still offer the inviting water, natural beauty, and Zen-like tranquility that enticed Rosenbloom.

On the shores of Gull Pond, Portnoy talks about the pleasure of swimming here on summer afternoons. “Even when there are 50 or 80 people here,” he says, “you go out a few hundred yards and you have it all to yourself.”

What if Sharks Scare Cape Cod Beachgoers to the Fragile Kettle Ponds?
Cape Cod, Sharks, and a New Reality
0
share this