BU provost’s collection: geological artifacts and a giant Rhett statue in need of a paint job 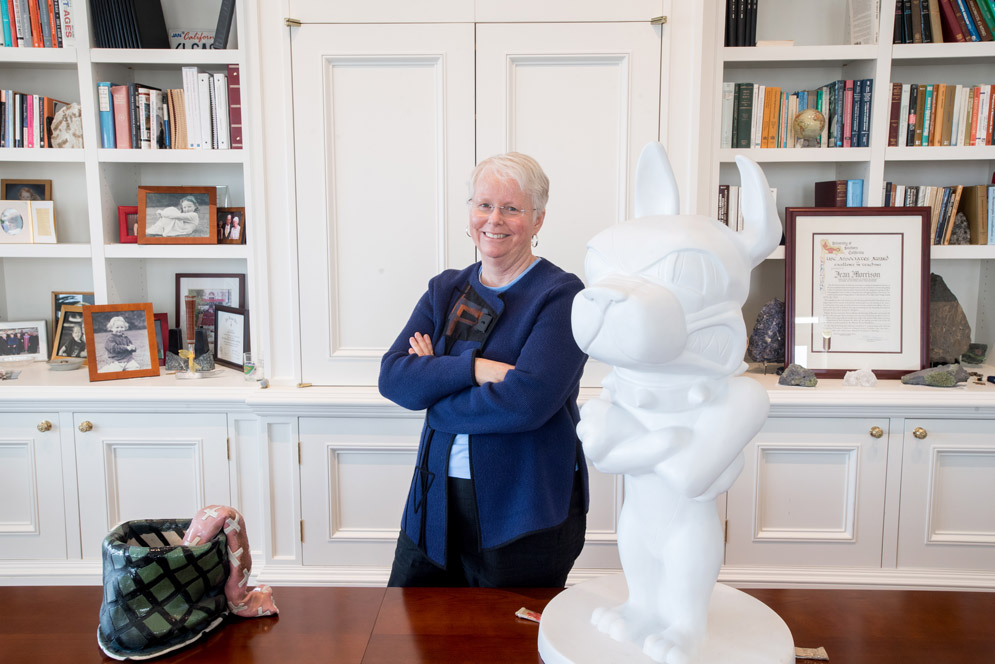 Click on the circles above to see more of what Jean Morrison displays in her Silber Way office.

Jean Morrison is a metamorphic petrologist, someone who studies how the Earth’s crust evolves over time. Before she became BU’s provost and chief academic officer in 2011, she taught at the University of Southern California and was an administrator there. Her large, white-paneled office on the eighth floor of One Silber Way offers glimpses of her earlier life—rare crystals, textbooks, and reference guides. One rock even does double duty as a book end. A pristine inscribed tool sits on a shelf.

“That’s a rock hammer I was given when I left the University of Southern California,” Morrison says. “You use it out in the field to break off weathered surfaces of rock. My regular rock hammer is all beat up and worn.”

Morrison brought her considerable geological expertise to the classroom. She spent 22 years at USC, an experience she loved. She says she sometimes toys with the idea of teaching a class at BU. In fact, among her many titles is College of Arts & Sciences professor of earth and environment.

“I miss teaching and I’ve thought many times about how it would be fun to teach a class,” she says, “but the reality is the care and attention to the students that being a good teacher takes is wholly inconsistent with doing my job as provost, where I have to be able to respond to crises; my time is often spent in meetings.”

Above her desk, across from bookshelves filled with rocks, hangs the USC’s highest teaching honor, an Associates Award for Excellence in Teaching, which Morrison won in 2002 and says has special meaning for her.

The inscription reads: “An accomplished teacher and respected researcher, [Morrison] possesses an extraordinary ability to share her excitement about scientific discoveries. She cares deeply about teaching and effectively demystifies science in order to convey the power and mystery of nature… She is equally at home in the classroom, in the laboratory, and in the field.”

Oh, and that large Rhett statue Morrison is standing next to? He’s left over from a 2005 Parents Weekend contest, where student groups painted the Terrier mascot, with the top four vote-getters winning a cash prize. Morrison says the paint-less Terrier mysteriously showed up in her office one day—she has no idea who let him in—and she wants to commission an artist to paint it.