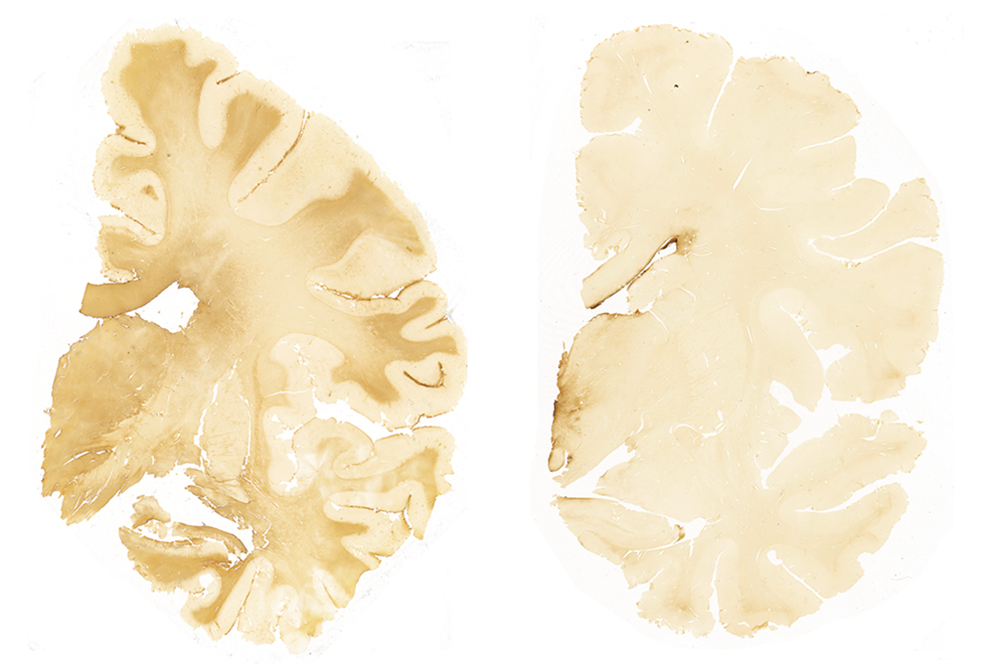 Sections from two brains used in the current study. The left sample comes from a 17-year-old male high school American football player who died by suicide two days after a closed-head impact injury. The brown stain indicates a widespread immune response, pointing to an abnormal increase in the number of astrocytes, a type of helper cell in the brain, due to the destruction of nearby neurons. The sample on the right, from the control group, shows the brain of a 22-year-old male and former high school American football player who also died by suicide, with no history of recent head injury. Images courtesy of BU School of Medicine

A new BU-led study published Thursday in the journal Brain suggests that chronic traumatic encephalopathy (CTE) is caused by head injuries, not by concussions. The research explains why 20 percent of athletes who exhibited the early stages of the progressive brain illness postmortem never had a diagnosed concussion.

“It’s the hits to the head, not concussion, that trigger CTE,” says study coauthor Lee Goldstein, a School of Medicine associate professor of psychiatry, who also has an appointment at the College of Engineering.

The study suggests that head injuries can cause blood vessels to leak proteins into adjacent brain tissues, inflaming them. CTE is a brain disease characterized by accumulation of tau protein around the brain’s blood vessels. It is found in athletes, soldiers, and others who have suffered repeated concussions and other brain trauma, and is associated with dementia, mood changes, and aggression. Concussions are injuries that impair a person’s functions, such as memory or balance.

The study’s finding is important because efforts to protect athletes focus on preventing concussions rather than repeated hits to the head, says Christopher Nowinski, codirector of BU’s Chronic Traumatic Encephalopathy Center.

“In order to reduce CTE risk” in athletes and military veterans, “there must be a reduction in the number of head impacts,” says Ann McKee, director of the CTE Center and another study coauthor. “The continued focus on concussion and symptomatic recovery does not address the fundamental danger these activities pose to human health.”

McKee and her team first examined the brains of four dead teenage athletes who’d suffered head injuries one, 2, 10, and 128 days before they died. They found a range of post-trauma pathologies, including one case of early CTE (the disease has four stages) and two brains with abnormal tau accumulations. When researchers compared the brains to those of four teenage athletes who had not suffered recent head trauma, they found that those brains did not have the same pathologies.

The researchers speculated that early CTE could result from damaged brain blood vessels that leak blood proteins into nearby tissue, causing inflammation of the brain. They tested the hypothesis by exposing lab mice to two different triggers linked to CTE: repeated head impacts and blast exposures.

They then scanned the mice brains and found leaky blood vessels, as well as persistent changes in electrical functions, possibly explaining cognitive impairment in some people after similar injuries.

“The same brain pathology that we observed in teenagers after head injury was also present in head-injured mice,” says Goldstein. “We were surprised that the brain pathology was unrelated to signs of concussion.”

The researchers focused especially on capillaries, the smallest “and most important blood vessels” in the brain, Goldstein says, through which oxygen, nutrients, and waste removal occur. “Head impact results in focal disruption” of capillaries, resulting in proteins leaking into the brain, he says.

The researchers also used computer simulations from Lawrence Livermore National Laboratory and mechanical models from BU, both of which showed that triggers for concussion and CTE may be distinct.

There are 2 comments on BU-Led Study: CTE May Occur without Concussions

BU-Led Study: CTE May Occur without Concussions
2
share this