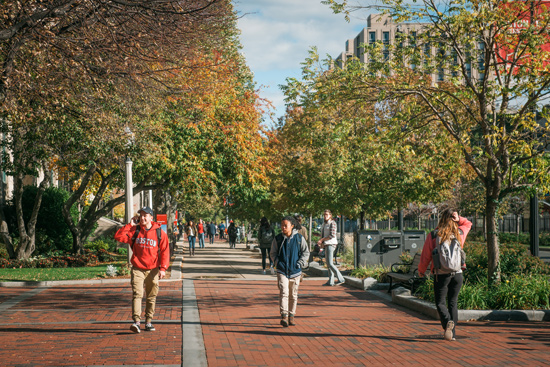 BU saw increases in the number of African American and Hispanic applicants this year. Photo by Janice Checchio

Kelly Walter and her BU Admissions crew have logged a lot of frequent flyer miles of late, visiting 2,000-plus high schools around the globe in search of prospective Terriers. Their exertions paid off: the University has broken the 60,000 mark for freshman applicants for the first time, with students of color driving the surge.

Walter, associate vice president for enrollment and executive director of admissions, says BU has received 60,701 applications, to be precise, for the Class of 2021, which aims to enroll 3,400 freshmen. The number of applications is 6 percent greater than last year’s applicant pool.

“BU is the first institution in New England to exceed 60,000 fall freshman applications,” says Walter, adding that she knows of only one private school, New York University, with a larger applicant pool. (Some mega-sized public universities receive applications in the six digits.) Data for applicant numbers are shared among universities and are available from other sources, such as the federal government.

Burgeoning applicant numbers are “a testimony to the growing reputation of Boston University as a major research university,” says President Robert A. Brown. Other factors, he says, are continuing refinement of the University’s academic programs and “the interest of today’s undergraduate student in the very urban and global experience that is our hallmark.”

Walter says no single BU school or college is driving the application surge.

The bigger pool mainly comes from US applicants, “and in particular underrepresented minority students,” she says. Roughly 4,300 African Americans applied, representing 7 percent of the applicant pool and a 15 percent jump over last year’s percentage of black applicants.

Hispanic and Latino applicants, at 6,150, exceed 10 percent of the applicant pool, and mark a 9 percent increase over last year.

International applications rose just 3 percent, although at more than 13,000, they represent more than one-fifth of the applicant pool, according to Walter. Those would-be students come from 162 countries.

“There is a significant increase in students applying to BU under our binding Early Decision program,” she says, with the two rounds under the program drawing more than 4,100—up 22 percent over the previous year. Admissions among those early-bird applicants will make up more than a third of the Class of 2021, she forecasts.