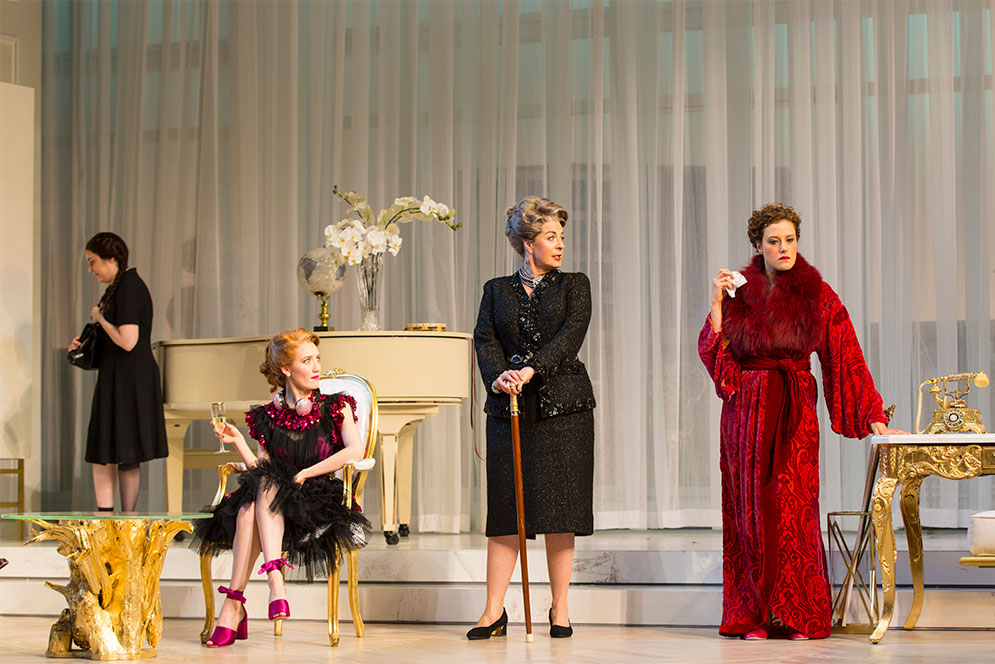 The Huntington Theatre Company production of Tartuffe is the first Molière play veteran actor Paula Plum (CFA’76) has appeared in. In the cast are Katie Elinoff as Flipote (from left), Sarah Oakes Muirhead (CFA’15) as Mariane, Plum as Madame Pernelle, and Melissa Miller as Elmire. Photo by T. Charles Erickson

Over the course of a career spanning more than four decades, Paula Plum has racked up a résumé any actor would envy: Cleopatra in Shakespeare’s Antony and Cleopatra, Lady Macbeth in Macbeth, Linda in Arthur Miller’s Death of a Salesman, and Martha in last season’s Lyric Stage production of Who’s Afraid of Virginia Woolf? by Edward Albee (Hon.’10). Plum (CFA’76) is as adept in comedies by Neil Simon and Noel Coward as dramas by Bertolt Brecht. So it may come as a surprise that she’s never appeared in anything by the great French playwright Molière.

That oversight has now been addressed. The prize-winning actor is currently playing Madame Pernelle in the Huntington Theatre Company’s new production of Molière’s comedic masterpiece Tartuffe, running through December 10 at the Huntington Avenue Theatre. The plot centers around a devious religious hypocrite and con man—Tartuffe—who charms his way into the household of Orgon, a prosperous Frenchman. Orgon is blind to Tartuffe’s devious nature, and it’s left to his family to expose Tartuffe for what he is. And while Orgon’s mother, Madame Pernelle, is a supporting role, it’s one that Plum is relishing.

“Playing Madame Pernelle is like being shot out of a cannon, because I enter in high dudgeon at the top of the play and just launch into an aria for about 10 minutes, excoriating everyone on stage, the whole family. She’s really a battle-ax,” Plum says.

It’s a tour de force performance. Donning a coiffed wig and knit suit (the play is set in modern times, with the actors in contemporary dress) she looks like an entitled society matron, albeit one who takes no prisoners. But like her son, Madame Pernelle is blinded by Tartuffe’s true nature for much of the play and refuses to acknowledge that she’s been wrong about him until it’s nearly too late for everyone.

Plum was bound and determined to either act in or direct the Molière farce after seeing a production last year at the Comédie-Française in Paris, so when the Huntington offered her the role, she jumped at it.

“It’s a social commentary for all ages. There’s always someone who’s trying to lead, who’s the emperor who isn’t wearing any clothes, who underneath is a complete villain,” she says. “Look at the current Cabinet and administration. I don’t think anyone could miss that this is a commentary for this moment right now. Unless they’re completely blind like Madame Pernelle.”

Tartuffe is a challenge for even the most experienced cast. It was originally written in 12-syllable lines of rhyming couplets; the Huntington production uses a recent translation by Ranjit Bolt. “We’re doing a version that is four beats to a line, and it makes you feel even more hectic and frantic with the language, but it propels the play forward in a really wonderful way, so there’s terrific velocity to the language and the action,” Plum says.

Growing up in Lynn, Mass., Plum attended Catholic schools. As a sixth grader, she struck a deal with the nuns: instead of doing a book report, she’d write playlets from the books she’d read and act them out in class. “It’s incredible, now that I think about it, that they agreed to it, because they were so rigid in so many other ways,” she says. In high school, she wasn’t allowed to join the Drama Club as a freshman, so she’d take monologues from plays and act them out in front of the class.

When it came time to consider college, her mother, a 1937 graduate of the School of Education, urged her to apply to BU. Plum gets teary recalling the influence of two faculty members in particular—Joe Gifford and Rose Shulman. “Joe was my movement teacher. He was always on the cutting edge, and he led us all to meditation. He became my Reiki teacher. They were a formidable duo. They really kind of believed in the power of the body to tell you what you’re doing on stage…the body has a sort of wisdom of its own that has nothing to do with your mind or what you think about a role. Your physical impulse comes first.”

Plum remained close to Gifford until his death at 97 this past September. He came to all of her performances and gave her a piece of advice she’s carried throughout her career: “He said, ‘Don’t take it personally,’” she says, referring to the inevitable rejection inherent in being an actor. “He said it has nothing to do with you. That’s just your ego. You have to step away from that in order to work.”

Plum’s first professional role after graduating from BU was as “leading lady” at the New Hampshire Center for the Performing Arts. The title belies the job’s jack-of-all-trades nature. “For $75 a week and no room and board, I had the lead in the first three plays of the season. I built all the sets with the other actors. I was in charge of getting all the costumes for the plays,” she says. “It was a great job. I couldn’t believe I was being paid to act. I also learned how to operate a table saw.”

Returning to the Huntington Avenue Theatre is a homecoming of sorts. Plum appeared in several productions as an undergrad at what was then the BU Theatre and made her professional debut there with the Huntington Theatre Company in a production of Tom Stoppard’s satirical comedy Jumpers in 1983. It proved a memorable debut: “I did a strip on a trapeze at the top of the show,” Plum recalls with a laugh.

She then joined the cast of Boston’s longest running theatrical production, Shear Madness, now in its fifth decade, playing nearly 1,000 performances. The zany comedy, which changes from night to night depending on audience participation, provided invaluable training. “I learned so much about how you just go out and do the show, no matter how you feel. We were doing eight shows a week, sick, migraine, tired, upset, whatever, you learned to throw it off and go out and do the show,” she says. “And I learned a huge amount about comedy.”

Since then, Plum has become one of Boston’s most in-demand actors, appearing with virtually every theater company in the area, in comedies and dramas, new and classic.

“Paula’s range is extraordinary,” says Boston drama critic Ed Siegel, editor and critic at large for WBUR’s The ARTery. “I smile just thinking of her as a goofy Sister Acacius in Charles Busch’s The Divine Sister. She’s equally sensational at the other end of the spectrum—her Martha in Who’s Afraid of Virginia Woolf? is as good as it gets.”

Three roles from that long résumé stand out as high points. “Lady Macbeth was such a wonderful journey: the character takes such an incredible journey from avarice and power to total destruction, psychological madness,” Plum says. “And I adored working on Who’s Afraid of Virginia Woolf? this year. To have an opportunity to go deeply into the heart of someone who’s covered up so much of her life with alcohol, with flirtation, with sexual escapades, and suddenly you understand what all the pain is in the third act, it’s gorgeous…It’s just once in every 10 years you get an opportunity to play a role like that.” For her Martha, Plum picked up a third Elliot Norton Award, Boston’s highest theatrical honor. She also received the 2004 Elliot Norton Award for Sustained Excellence. The year before that, she was honored with the College of Fine Arts Distinguished Alumna Award.

Plum says her favorite experience on stage was playing a Siamese twin boy who must learn to survive after the death of his more dominant brother in a play called Sidekick, which she first performed in 1995 at the Unadilla Theatre in Vermont, and then reprised at Gloucester Stage in 2003. She asked her dentist to create a prosthetic that changed the shape of her jaw for the role, making it more masculine. She was so convincing in the part that even her brother was fooled. It was 20 minutes before he turned to her husband, actor Richard Snee, and said, “Oh my God, that’s Paula!”

“That’s such a thrill for an actor, when you totally fool everyone,” she says.

In addition to her work as an actor, she has taught acting at local colleges, worked as a private coach, written plays (her latest is about the poet Edna St. Vincent Millay), and directed for the stage. She is one of the founders of the highly regarded Actors’ Shakespeare Project, a nonprofit theater company dedicated to producing plays by Shakespeare and other leading playwrights. As a member of its resident acting company, she’s appeared in at least a dozen productions, including Richard III, Macbeth, and Much Ado about Nothing.

Plum attributes her longevity to persistence. “My husband calls me a stress-seeking missile,” she says. “I really don’t ever give up. There’s so much rejection in this business, but I keep going back. I think persistence is even more important than talent in terms of survival in the theater. You have to be willing to continually put yourself out there.”

And when she finishes her run in Tartuffe, Plum will return for a 15th season directing WGBH’s long-running live holiday theatrical production A Christmas Celtic Sojourn, hosted by the irrepressible Brian O’Donovan. The production, a mix of Celtic theater, dance, and music, plays at Boston’s Cutler Majestic Theatre at Emerson College December 14, 15, 16, 17, 21, and 22.

The Huntington Theatre Company’s production of Tartuffe is running at the Huntington Avenue Theatre, 264 Huntington Ave., Boston, through December 10. Purchase tickets online, by phone at 617-266-0800, or in person at the theater box office. Patrons 35 and younger may purchase $30 tickets (ID required) for any production and there is a $5 discount for seniors. Military personnel can purchase tickets for $20 with promo code MILITARY, and student tickets are available for $20 (valid ID required). Members of the BU community get $10 off (ID required). Call 617-266-0800 for more information. Follow the Huntington Theatre Company on Twitter at @huntington.

A Plum Role for CFA Alum in Huntington’s Tartuffe