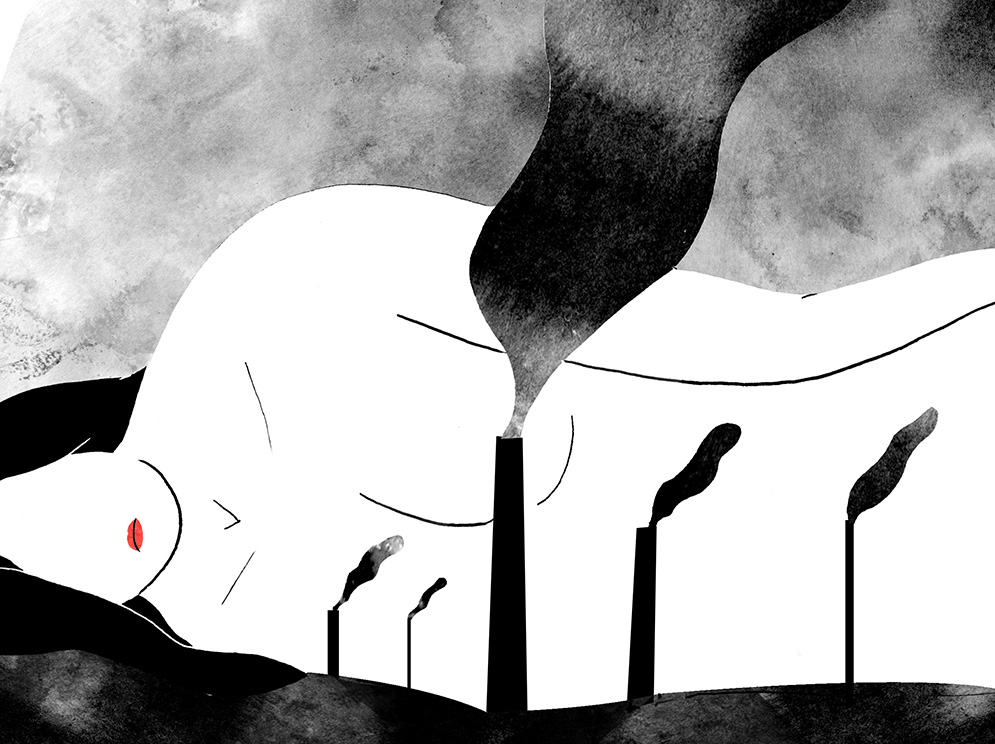 This is a cancer cell’s purpose. To achieve it, cancers are endlessly inventive, hijacking healthy cells’ essential systems in a grotesque parody of normal biology. And through the new chemicals we are putting into the environment, we are helping them do it. We just don’t quite know how. 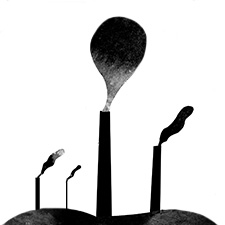 “You can think of it as a potential chemical depot,” says Sherr, who is also a School of Medicine professor of pathology and laboratory medicine, adding that when lab rats are exposed to certain kinds of pollutants, the cancer they develop is primarily breast cancer. (The breasts aren’t the only part of the body that are sensitive to environmental chemicals: the liver, for example, which helps clear harmful substances from the bloodstream, is also especially vulnerable, as the lungs are to smoking and air pollution.)

“Professor Sherr has been a consistent and clear voice about the role of chemicals in producing cancer, guiding us towards potential opportunities for prevention,” says Sandro Galea, Robert A. Knox Professor and dean of SPH. “He is a basic scientist who is always concerned about the applications of his work.”

To Sherr, environmental chemicals are both a problem, and perhaps, the path to a solution. Their biological potency provides him and his team a novel understanding of the signaling pathways that go haywire in cancer. He hopes that his work on understanding environmental toxins, supported by grants from the Art beCAUSE Breast Cancer Foundation and the National Institute of Environmental Health Sciences’ Superfund Research Program, might lead to new cancer treatments, especially for so-called triple-negative breast cancers, which tend to be very aggressive and don’t respond to hormone-blocking drugs.

“Triple-negative breast cancer right now is a black box,” says David Farb, a MED professor and chair of pharmacology and experimental therapeutics. It doesn’t have any of the three growth-controlling receptors that doctors know how to target with drugs (hence the name triple-negative), so oncologists typically fight it with some combination of surgery, chemotherapy, and radiation. Farb hopes that Sherr’s work can uncover new targets, so drugs can selectively target triple-negative breast cancer with fewer side effects.

The story of Sherr’s research starts with a family of chemicals called dioxins, produced by many industrial processes like burning trash, bleaching paper, and making pesticides. Low levels of dioxins are ubiquitous in the environment worldwide: babies are exposed even before birth, and it is found in breast milk and formula. Acute, high-level exposure can lead to birth defects, skin lesions, heart disease, and cancer.

Scientists have known since the 1970s that dioxins are harmful, and most industrialized countries have taken steps to limit their release into the environment. But it took two decades for toxicologists to understand how dioxins infiltrate cells. “They could see the dioxins binding to something; they could track whatever that was into the nucleus,” says Sherr. Finally, in 1993, researchers cloned the gene for a protein called the aryl hydrocarbon receptor, or AhR, that binds to dioxins. A cellular receptor is like a car’s ignition keyhole: when a chemical key fits into the hole, it switches on different operations within the cell. The AhR is a receptor with a peculiar property, Sherr says: “The AhR is expressed by some healthy cells, but there’s no place where it’s expressed at such high levels as in cancers.” He has found this “insanely high” AhR expression in every type of cancer cell he has tested (with the exception of some blood cancers), with triple-negative breast cancers among the highest of all. Plus, he adds, the AhR ignition is always switched on in cancer cells, suggesting that something in the environment is constantly turning the key. 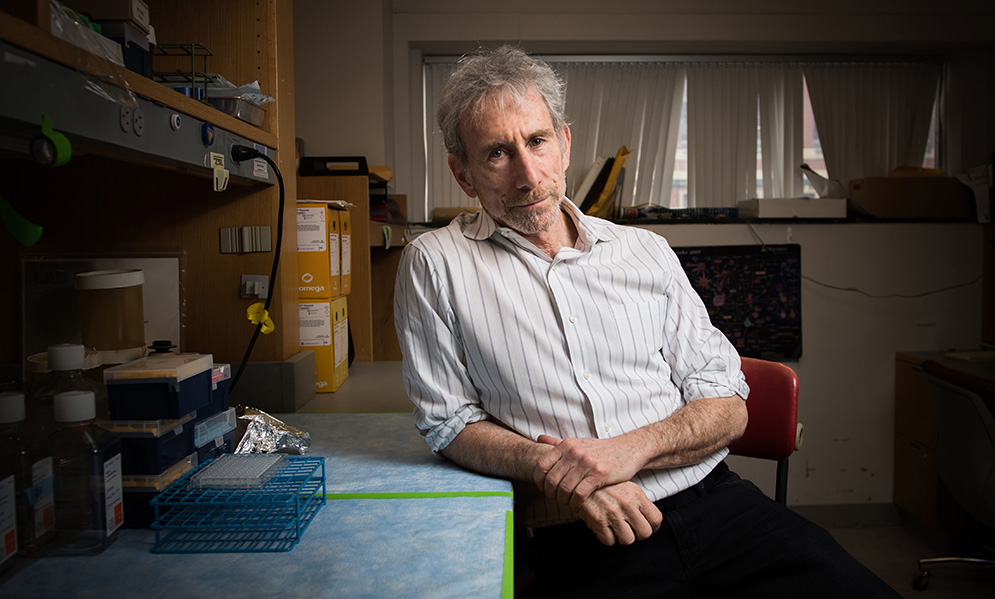 “Tumor cells are very efficient,” says Sherr. “They don’t do things unless it provides some survival advantage.” The AhR must be giving cancer cells an edge, he thought, but how? An answer could point the way to new treatments, and perhaps a solution to the difficult problem of triple-negative cancers.

Part of the answer began to emerge about 10 years ago, when researchers discovered that the AhR may help cancer outsmart the immune system. The Sherr Laboratory began studying the connection between immune cells and the AhR in 2010, riding a rising wave in cancer medicine called cancer immunotherapy, a treatment strategy that harnesses the body’s natural immune defenses to shut down cancer. “The immune system is designed to recognize virtually everything that you can be exposed to—viruses, bacteria, fungus—and it’s flexible,” Sherr says. “So if you want to kill cancers, use the immune system.”

It isn’t a new idea. Even before the turn of the 20th century, doctors saw cases where the body’s infection-fighting response seemed to knock out cancers. But a century of scientific whiplash has sent cancer immunotherapy lurching in and out of fashion. In the 1980s and ’90s, scientists hypothesized that individuals with cancer might have globally weakened immunity, and they tried drugs that jacked up the whole immune system. Some patients saw astonishing results—but those “cures” lasted just months before the cancer came back.

Then, researchers came to a new understanding of cancer and the immune system. They found that tumors could selectively suppress immune cells that recognized them, like movie criminals who hamstring the one detective who knows their true identity.

This is where the AhR may come in. In research published in BMC Biology, the Journal of Molecular Cancer Research, and Molecular Pharmacology, Sherr and his team revealed that the AhR helps cancer cells scuttle the immune system. “We know that the AhR is present in cancers and that it helps the tumor metastasize while producing immunosuppressive signals,” Sherr says. “The question we need to answer, in a real, accurate model of human disease, is whether these are dominant factors in cancer emerging, becoming metastatic, and suppressing the one biologic system powerful and flexible enough to stop nascent cancers: the immune system.” His lab will be conducting animal studies to examine the AhR’s role in immune responses to cancer. Their work could lead to new drugs that use the molecules that tamp down the AhR to kill cancer, especially triple-negative breast cancer, with its unusually high AhR activity.

Two years ago, Sherr and a team that included Elizabeth Stanford (SPH’11, MED’15), now a Northeastern University assistant professor, and Olga Novikov (CAS’06, MED’09,’18) found another way that the AhR drives cancer: it can transform ordinary, or bulk, cancer cells, into a more pernicious variety known as cancer stem cells. The work was published in BMC Biology in 2016. Although cancer stem cells make up a tiny subset of all cancer cells—perhaps a tenth of a percent, Sherr says—they are unusually aggressive and resist treatment with chemotherapy and radiation. Cancer stem cells have been identified in a number of cancer types, including breast cancer.

“It is very important to understand what the consequences are over a lifetime of exposure,” says Farb, referring to the spectrum of environmental chemicals that activate the AhR.

“They’re like the head of the dragon,” says Sherr. “These are the guys that you really need to get” to wipe out tumors and prevent relapses.

When Stanford, Sherr, and their colleagues fed AhR-activating molecules to breast cancer cells, the tumor cells morphed into cancer stem cells by switching on genes that helped them spread and live longer. But it is possible to stop the transformation. When Sherr’s group dosed human breast cancer cells with molecules that stifle the AhR, the cancers were less able to spread and easier to kill with chemotherapy. AhR inhibitor drugs are now in preclinical testing with Netherlands-based Hercules Pharmaceuticals, a company Sherr has an equity interest in.

“It is very important to understand what the consequences are over a lifetime of exposure,” says Farb, referring to the spectrum of environmental chemicals that activate the AhR. “From a pharmacology standpoint, they pass rapidly through all the barriers in the body,” like the blood-brain barrier, “and they can get into membranes and stick there, so the possible effects of repeated exposure can be cumulative and persist for a long time.”

As for what you can do to limit your exposure to environmental chemicals, Sherr has some advice: don’t buy cooking oils in plastic bottles, because the oil can absorb components of the plastic. Don’t microwave food in plastic containers, even if they say “microwave safe.” Avoid pesticides. But the biggest impact, Sherr says, will come from changes that we make as a society, not as individuals.

“Be an environmental activist,” he says. “Be aware of what’s around you—and make others around you, including those in a position to affect public policy, aware of the dangers and the magnitude of the problem.”

Kate Becker can be reached at kate@spacecrafty.com.

Too Many Black Women Die from Breast Cancer. Why?

Dioxins Point to Targets for Treating Breast Cancer
2
share this