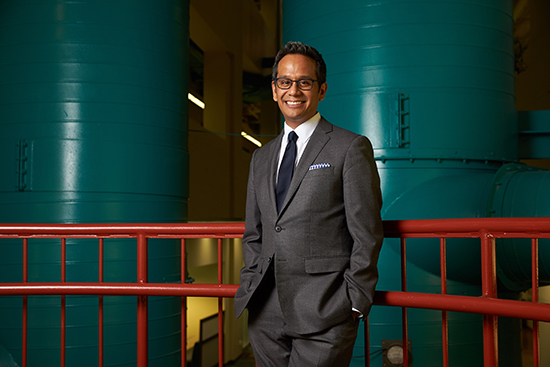 Some 80 students sitting in the studio classroom in the basement of the Metcalf Science Building listen carefully as Manher Jariwala, a lecturer in the College of Art & Sciences Department of Physics, outlines the day’s topic: calculating the wavelengths of light in various experimental settings.

If this were a typical introductory physics course, Jariwala would lecture for the next hour. But just a few moments into the period, he refers students to the worksheet they picked up at the door. They jump up and attack the first problem using the smart boards and white boards that line the walls. Jariwala paces the room, commenting on a missed approximation here, enthusing about a sine or tangent there. But mostly, the students collaborate to do the calculations themselves.

“The first time I went to the studio classroom, I thought, ‘Uh, where do I stand so everyone can see me?’” Jariwala says. “But there is no place, and that’s the idea. You’re not the center, you’re not the ‘sage on the stage.’”

As a scientist, Jariwala’s field is condensed matter physics. But it’s his focus on physics education and active teaching techniques—as well as his interest in every student—that have made him a 2016 winner of the Metcalf Award for Excellence in Teaching.

“It’s been said many times: it’s not what you cover, it’s what the students uncover,” he says. “We try to put students in situations where they are discovering new things, constructing their own knowledge.”

That’s especially challenging for Jariwala because he specializes in teaching the required general physics sequence to mostly non-physics majors. Yet his student evaluations are among the highest in the department year after year, according to the Metcalf nomination signed by four faculty members, and they are “virtually unheard of” for a large, required introductory class.

“If you sit in on one of Manher’s studio sessions,” student Ryan Gelly (CAS’16) wrote in another nomination letter, “you will undoubtedly find him presenting a concept and then personally circulating the space to assess the students’ understanding on a personal level, all while making sure that no student is left behind.”

Jariwala memorizes every student’s name and did so even when he faced 125 or more students in a class. It was important for them to know that they weren’t just a number, that what each learned was important to him.

Still, something about the big lecture courses didn’t work the way he wanted.

“I know how to give a good lecture for a long time, how to keep people’s attention, to be dynamic, to do demos and make jokes and bring a lot of energy and enthusiasm to the class,” Jariwala says, his voice beginning to rise. “But I would then look at exams and say, ‘How did this student miss this? We went over it in class and I told them about it. This problem is just a little different than the one we did in class! How come they can’t see the connection?!’”

The answer, he decided, was to make them learn using the same process they would use in actual scientific research, by working the problems themselves, collaboratively. It was an approach he had already seen at work in the classroom of Andrew Duffy, a master lecturer in physics and a Metcalf Cup and Prize winner, in 2012. Jariwala found the approach so appealing that he sat in on every class Duffy taught for a year to absorb his methods.

“Manher Jariwala brings a joy of teaching and learning to his classroom, which is a tremendously interactive environment,” Duffy says. “It’s not surprising that the students really enjoy his physics class—his enthusiasm is infectious.”

Jariwala sampled different teaching approaches during his graduate-student years at the University of Maryland, where he spent a year working with the Physics Education Research Group run by Edward F. (Joe) Redish, a professor of physics there and a pioneer in this field. Since his arrival at BU in 2007, Jariwala has dived in full force, tackling physics education from “a research validated perspective.” In particular, he has become an active adherent of the Learning Assistant Program developed at the University of Colorado–Boulder.

Different from graduate assistants or teaching assistants, learning assistants are undergraduates who have taken the course in previous sessions and done well. They are paid a modest stipend (typically $750 a semester) to facilitate small-group interaction in subsequent sessions. They make the studio classroom work by helping students in the role of interested colleagues, challenging assumptions and hinting at other methods of reaching an answer.

“What is validating is how faculty are changing their courses in large and small ways to incorporate learning assistants, who work with students in small groups in which students have to articulate and define and revise their ideas,” says Jariwala, now an active member of the International Learning Assistant Alliance as well as associate director of BU’s Learning Assistant Program.

The approach, he says, builds student enthusiasm that’s notable when he recruits the next year’s crop of learning assistants. And its effect is supported by independent assessments of student learning outside of the grading system. BU is in the first year of a multi-year study (supported both by the National Science Foundation and the Office of the Provost) to evaluate the program more comprehensively.

“Even in the studio classroom, I use fewer and fewer slides with all the answers on them. I can just look around the room and see that students have got it,” Jariwala says. “I’ve learned to really like it. They’re learning things, and we’re just guiding them, giving them that opportunity, and they really like it, too.”

That’s not the only program that Jariwala helped found. “Two summers ago, Professor Jariwala asked me if I wanted to start a mentorship program for the incoming physics students,” student Emily Ghosh (CAS’16) wrote in a nominating letter. “I had no idea where to start, but with his guidance and tremendous support, less than a month later, my friend and I founded PRISM—PeeRs for Incoming Students Mentorship. Even though he always claims that we developed the program entirely on our own, PRISM would not be where it is today without his help.”

A gift from the late Arthur G. B. Metcalf (SED’35, Hon.’74), a BU Board of Trustees chair emeritus and former professor, funds the Metcalf awards, created in 1973 and presented at Commencement. The Metcalf Cup and Prize winner receives $10,000 and the Metcalf Award winners receive $5,000 each. A University committee selects winners based on statements of nominees’ teaching philosophy, supporting letters from colleagues and students, and classroom observation.

The winner of this year’s Metcalf Cup and Prize, the University’s top teaching honor, is Christopher Gill, associate professor of global health at the School of Public Health. The second Metcalf Award goes to Erin Murphy, associate professor of English and women’s, gender, and sexuality studies at the College of Arts & Sciences.

CAS’s Jariwala Honored with a Metcalf Award
0
share this