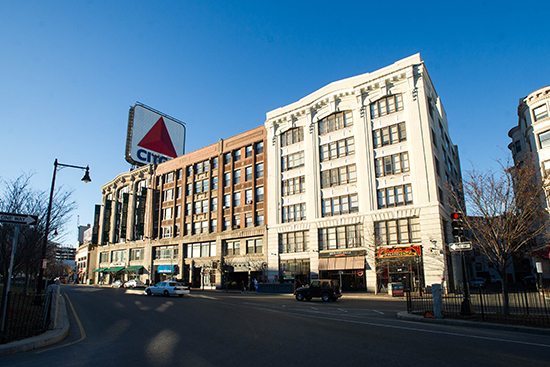 Nine buildings owned by BU on the north side Kenmore Square will be put on the market. Photo by Cydney Scott

As part of a four-decade-long effort to upgrade Kenmore Square, Boston University has hired a broker to manage the sale of several high-profile buildings it owns in the square, including the one that houses Barnes & Noble at BU and supports the iconic Citgo sign, which has loomed over the square since 1965.

Gary Nicksa, senior vice president for operations, says the University will work with Newmark Grubb Night Frank, known as Newmark, to sell the properties, which include 334,000 square feet of commercial space, now occupied by Barnes & Noble, Bertucci’s restaurant, Cornwall’s Pub, and several other tenants. The nine buildings that will be put on the market line the north side of Kenmore Square, from 648 Beacon Street to 541 Commonwealth Avenue and 11-19 Deerfield Street.

In August, the University invited four highly regarded firms to submit proposals describing how the properties could be put to best use for the neighborhood, and what they would be worth in today’s real estate market. Three firms, Newmark, Jones Lang LaSalle, and CB Richard Ellis submitted proposals, and the University selected Newmark, because its capital markets team “is very experienced in this type of placemaking opportunity,” Nicksa says. “We believe this sale will not just be of regional interest. We think it will attract national and international attention.”

Nicksa says the sale of the Kenmore Square properties is the latest of many strategic moves designed to encourage “positive city building” in Kenmore Square. Three years ago, BU sold the four-star Hotel Commonwealth, which the University built on a block on the south side of Kenmore Square that had been home to head shops and raucous bars.

“We want to promote development that makes Kenmore Square an even more vibrant part of the city and gateway to the BU campus,” says President Robert A. Brown. “That goal will be the guiding principle as we consider all the options available to us.”

Brown says the sale of the properties is an opportunity for Boston University to raise capital needed for investment in its core mission of teaching, research, and student services.

Robert Donahue, vice president for government and community affairs, says any development of Kenmore Square properties would be subject to approval by the city and the community. “The University will work in partnership with developers and with the community,” says Donahue. “We have a long history of cooperation with our Kenmore Square neighbors.”

According to Nicksa, the University has considered selling the properties several times in recent years, and the current climate of the Boston real estate market persuaded BU leadership to act now. “We feel the time may be right and the value may be good,” he says, adding that the value of the properties has increased significantly from several years ago.

All of the properties are considered noncore to the University’s mission, he says, and all but one are zoned for commercial use, and therefore not included in BU’s Institutional Master Plan.

There are 37 comments on BU May Sell Kenmore Square Properties