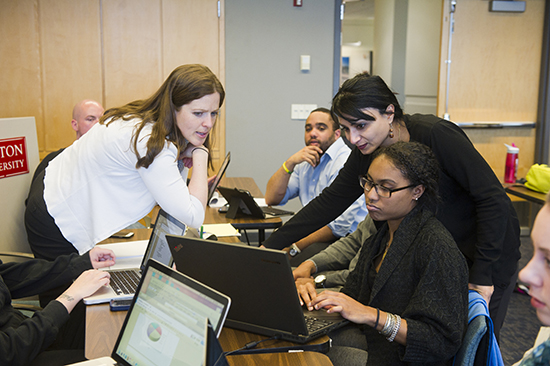 The 19 students in this year’s Boston Urban Symposium, the capstone course for graduate students in the Metropolitan College City Planning and Urban Affairs Program, have been able to apply their classroom learning this semester in a real-world setting that could have broad implications for the future. Since January, the students have been helping the city of Quincy, Mass., plan for climate change. The project has afforded them a glimpse of what it’s like to deal with municipalities and state agencies and enabled them to design what they hope will be a safer future for the city’s approximately 93,000 residents.

Each year, the symposium brings students together with community stakeholders, planning agencies, and other institutions to collaborate on actual projects. The MET group began by researching Quincy’s history and compiling land-use data, assessing possible impacts along the city’s coastline, and surveying residents in one particularly at-risk neighborhood. They studied various climate change response strategies, and learned to translate big-picture issues to local vulnerabilities, says Madhu Dutta-Koehler, a MET adjunct professor of applied social sciences and coordinator of the City Planning and Urban Affairs Program. They also learned how to work with city planners and staff of the Metropolitan Area Planning Council (MACP), the regional planning agency serving the 101 cities and towns of Metropolitan Boston, which is providing free technical assistance to Quincy’s effort as part of preparing Boston area communities for climate issues. The final result will be a 200-page report that the students hope will provide a significant contribution to the city’s effort to deal with the threats posed by climate change.

“This is extremely timely to be able to come in as a university and to help out local planning agencies who are resource-constrained, and to contribute to the larger discussion of planning for climate change,” says Dutta-Koehler.

“The timing is right for us to start planning specifically for our town on this issue,” says Robert Stevens, Quincy’s Planning and Community Development Department urban renewal planner.

Quincy has over 20 miles of coastline, Stevens points out, and an intimate connection to the water through the massive Fore River Shipyard, which built battleships for the Navy for much of the 20th century, and closed in 1986. The city has already completed projects to contain stream and river flooding and repair seawalls, Stevens says, but there’s more to be done. The demands of industry and development over time have meant the reduction of salt marshes and other changes that could be problematic in the face of rising sea levels.

With the potential for increased storm effects and rising sea levels, he says, “we need to go back and revisit some of these areas and see if there are ways to restore the ecological balance on our shoreline.”

The BU symposium offered no-cost help laying the groundwork for a Climate Action Preparedness Plan specifically tailored to Quincy, Stevens says. “And in the planning realm we’re all college graduates, so we’re big believers in helping out the next generation.”

Supervised by Dutta-Koehler and MET lecturer and course advisor John Weis, the symposium students split into two teams. One compiled reams of historical and technical data, assessing questions such as how the city’s environment has changed over the years and what important infrastructure—from roads to power lines to water treatment plants—might be vulnerable to flooding and storms.

The second team focused its research on the Germantown neighborhood, a peninsula at the confluence of the Town River and the Fore River with a large stock of public housing. Germantown has a preponderance of low- and moderate-income residents, many of them elderly or in single-parent households, Stevens says. They are viewed as a vulnerable population, less mobile and with fewer resources.

“Cities don’t generally go and look at most vulnerable neighborhoods separately,” says Dutta-Koehler, which means that the needs of those residents can get lost in a generalized plan. “One of our contributions was to find a way to incorporate these people back into the process and give them priority with the Germantown pilot study.”

Being sensitive to everyone’s needs

The students presented some initial results of their resident study at a mid-April meeting in Quincy organized by MAPC, and will post their final report online this summer, after a final round of input from stakeholders and climate and urban experts from BU and beyond.

With so many different agencies and officials involved, students also got some real-world lessons that could prove important later as they tackle any number of projects. “That’s one of the things that’s great about this class: you learn about the actual politics you need to deal with, with all the different stakeholders,” says Simmons. “You try not to step on too many toes, try to ask the right questions, try to respect the boundaries that people think should be established.”

“A couple of things my students have learned—number one, you can’t escape teamwork,” Dutta-Koehler says. “Collaboration is key, but collaboration has to be strategic. And they’ve also learned that they have to present themselves and their work in a very, very cautious way so as to be sensitive to everyone’s needs, while being able to push projects forward.”

The students say that one of their most valuable experiences was knocking on doors and surveying Germantown residents about their concerns.

Megan Doiron (CAS’09, MET’16) is hoping for a career helping communities prepare for climate change. Up until now, though, Doiron, a Questrom School of Business budgets and grants administrator, thought of herself as a scientist who wasn’t particularly interested in the human dimension. But talking to residents proved to be a surprisingly powerful experience.

“They started taking the survey and then they stopped and wanted to tell their stories, tell their experiences living in public housing in Quincy and their hardships and their family struggles,” Doiron says. “It was a really moving experience, and I came away with a much fuller understanding of the importance of talking to people in the neighborhoods, and how much you can glean just from these conversations.”

Instead of rising sea levels, she says, they had more immediate environmental concerns—such as mold in their homes and previous problems with air quality, the result of having lived near the Fore River Shipyard, closed for almost 30 years.

Students realized there was a social justice angle to the project when they got away from “paper learning” to engage with residents, Dutta-Koehler says. “And that’s when the project became extremely real,” she adds with a smile. “I think Megan was not the only one who felt that way.’”

“We’ve got to get residents involved now to make sure their voices are heard” in the future, Simmons says. “I don’t think a lot of folks are educated on this issue. I see the BU folks engaging our residents as a great first step to start informing them. Just them going and talking to the residents about the issue is a win in my mind.”

There are 2 comments on Defending the Coast