The idea for a School of Theology begins in to the mid-1830s when the Junior Preachers’ Society of the New England Conference asked LaRoy Sunderland to write an “Essay on Theological Education,” published by the Methodist Episcopal Church office in New York during the second half of 1834.

The introduction reports the essay was originally presented to the Christian Advocate and Journal, but the editor “thought it unadvisable to insert it.” Soon after, an editorial article called “An Educated Ministry Among Us” was written, but never published. Thus, the topic was relegated to the pamphlet produced in 1834 and also published in the Methodist Magazine and Quarterly Review.

The debate continued for nearly five years on the issue of whether clergy can be created by education, or if the call was God-given and could only be improved by education.

A notice was published in Zion’s Herald on March 27, 1839, announcing a meeting on Wednesday, April 24, at the Bromfield Street Church in Boston to discuss the issue of clergy education and the possible establishment of a Theological Institution.

That meeting turned into a two-day discussion that approved the basic purpose “that in the judgment of this Convention, it is expedient to establish in New England, a Methodist Theological Seminary, to be denominated THE WESLEY INSTITUTE, based on the principles of Christianity, as exhibited in Wesleyan Methodism, and affording the young men called of God to preach the gospel, ample facilites for a systematic and critical investigation of the Sacred Scriptures, and by a thorough course of religious, mental and physical discipline, preparing them to enter upon the duties of the sacred office, whether in the regular ministry at home, or in Foreign Missions.” (Zion’s Herald, May 1, 1839)

The Convention appointed committees to oversee the presentation of this proposal to the New England, New Hampshire and Maine conferences, to find a leader for the project, and to raise funds. 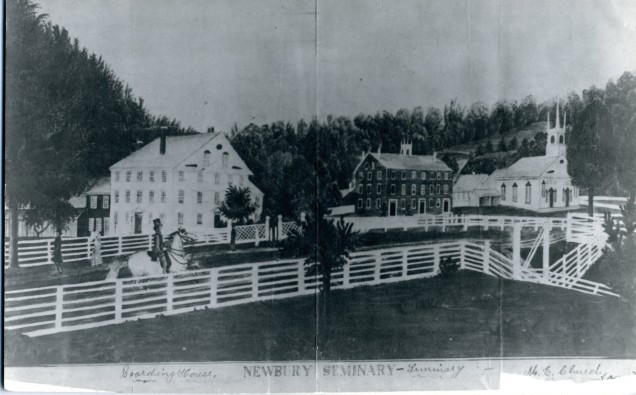 The Newbury Seminary had been established in 1834 in Vermont, not for educating pastors, but as a “literary institution,” and operated as a high school.

Following the meeting in Boston, Osmon C. Baker, director of the seminary, started a biblical studies program at the seminary, consisting of himself and W. M. Willett, who published The Newbury Biblical Magazine (1843-45).

Though other schools, like Wesleyan University in Connecticut, also began talk of some programs, Newbury was in the strongest position to be the school being established by the Boston group. Books and funds collected were sent to Newbury in support of the program. However, the established governing structure of the school made proper ministerial oversight of the program difficult, so though the Newbury Biblical Institute received support during the 1840s, another solution to the seminary issue was sought.