The Center for Latin American Studies at Boston University

The Growing Importance of Latin America

The growing relevance of Latin America on the world stage is beyond dispute. Changes in trade and diplomatic agreements with emerging superpowers in Asia and other parts of the globe, as well as anti-immigration policies, particularly those of the US toward its southern neighbor Mexico, are redesigning Latin America’s role in the international system. Furthermore, the dynamism of Latin America’s manifold cultures, intellectual trajectories and literary traditions cannot be ignored within the landscape of globalization. An unprecedented number of Latin Americans in the US and other parts of the globe are influencing the cultures, economies, and politics of these immigrants’ native and receiving countries. As the character of Latin America shifts, we need new ways to conceptualize, study, and evaluate the processes that cross and intersect national borders within and outside this region.

We are a vibrant community in the Pardee School of Global Studies at Boston University that engages students and faculty across multiple disciplines in the study of Latin America, including Art History, Archaeology, Economics, History, International Relations, Political Science, Romance Studies, and Sociology. For many years, we have promoted a forum for cultural exchange between the BU community and other universities and organizations around the world. We administer a major, a minor, and a concentration on Latin America within the International Relations major. We also offer a one-year master’s degree (LASMA) as well as a graduate certificate in Latin American Studies.

About the Center
Learn More 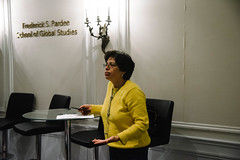