There are two common variants of hierarchical N-body algorithms: treecodes and FMMs. Both use tree data structures to cluster ‘source particles’ into a hierarchy of cells. See Figure 1. 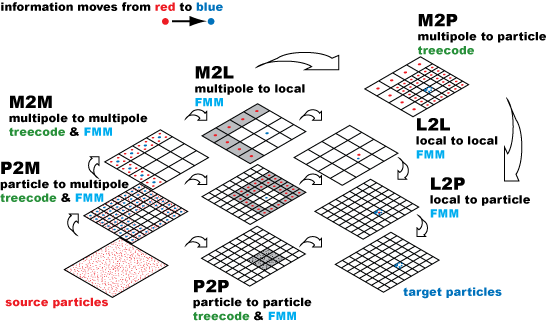 We developed a new treecode-FMM hybrid algorithm with auto-tuning capabilities, that is O(N) and chooses the most efficient type of interaction. It is highly parallel and GPU-capable. For some details about the hybrid algorithm, see the Features of ExaFMM.

Parallel performance has been studied in both strong and weak scaling. On multi-core systemas (Kraken supercomputer), strong scaling with 108 particles on 2048 processes achieved:

Weak scaling with 106 particles per node achieved 72% efficiency on 32,768 processes. These results are detailed in the following publication: