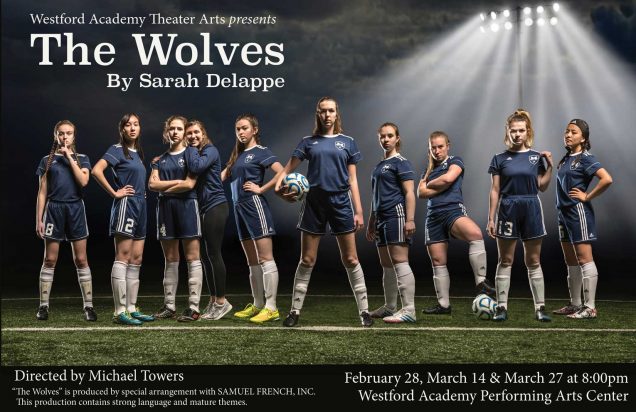 The Wolves can be seen on Wednesday March 27 at 8 p.m. in the Westford Academy Performing Arts Center. General Admission ($5-$10) seats will be sold at the door. 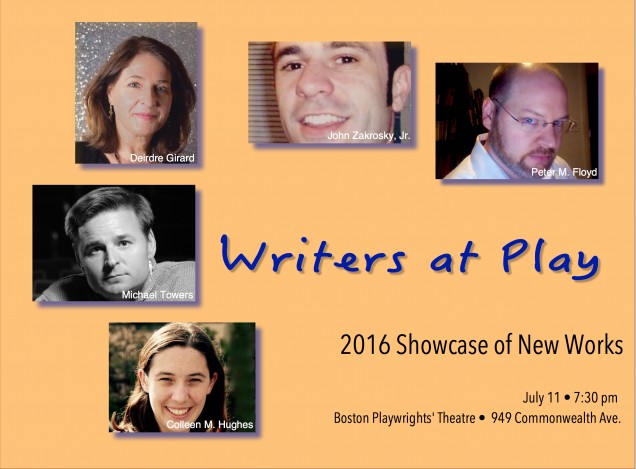 Writers at Play—a group of alumni playwrights—will host its annual Showcase of New Works right here at BPT on July 11. Come support some outstanding new plays (not to mention outstanding people)! Sample a few scenes from each new play, read by the professional actors who support Writers at Play throughout the early development process. FREE!

After by Peter M. Floyd: One of the few remaining people in a post-apocalyptic world, Parker is convinced that there is a conspiracy afoot among the leaders of the community of survivors. Is she right or is she crazy? How about both?

Shaken by Deirdre Girard: Beth’s been living under an assumed name in rural Vermont, finally finding peace and maybe even love, after fleeing Boston eight years earlier in the wake of her imminent arrest for a horrific crime. But when her sister Jasmine unexpectedly shows up armed with a law degree and breakthrough medical research, the two women begin a journey that explores the nature of truth and justice in a biased world — a journey that will change their relationship forever.

The Travellers by Colleen M. Hughes: Bri is seventeen and desperate for adventure. Her wish seems to be coming true when she meets the Traveller, a mysterious woman who can travel through time. But who is the Traveller, and why does she seem to care if Bri patches up her relationship with her mom? A play about the past, present, and future, what happens when you try to change them — and what happens when time starts to fight back.

The Comfort Kills by Michael Towers: Music has always been Brendan’s salvation but with the death of his father, he is unable to write — a condition which puts additional stress on his marriage. Performing in a local dive bar, Brendan meets an unlikely muse who inspires his music and his healing but drives a wedge between him and his wife.

The Kitchen and the Volcano by John Zakrosky, Jr.: A sister and brother may only have one last phone call together before a volcano erupts, destroying their family's past. 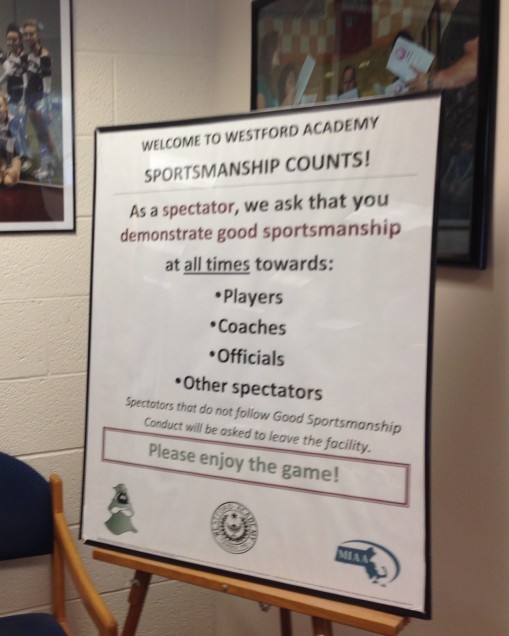 One of my favorite parts of the school year is the Massachusetts Young Playwrights' Project (MYPP), which brings playwright mentors into high schools all over the Boston metro. Over two class visits, we discuss play structure, read short plays, and read and discuss students' work (which are 10-minute plays). The culmination of all this activity is the New Noises Festival in April, when all the participating schools come together for a four-day presentation -- readings using professional actors and directors from the Boston theatre community -- of their work. This year, I am mentoring students at Westford Academy, where the drama program is run by fellow alum Michael Towers. His students visit us regularly to see our plays; they are some of our favorite audience members around here, so it will be fun to see the work they decide to put on the stage. 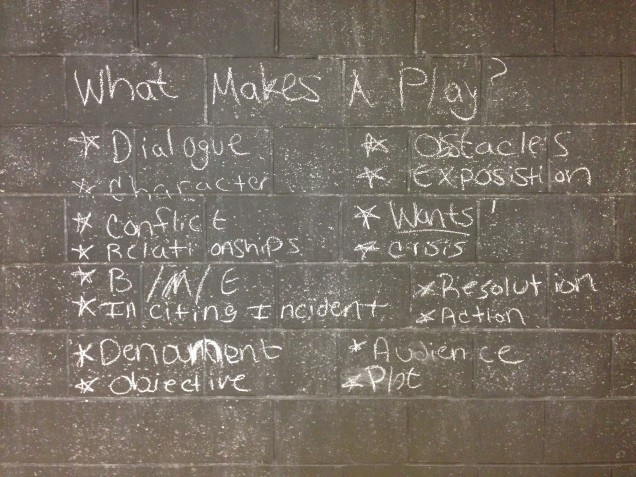 Our list. These guys know what they're talking about. 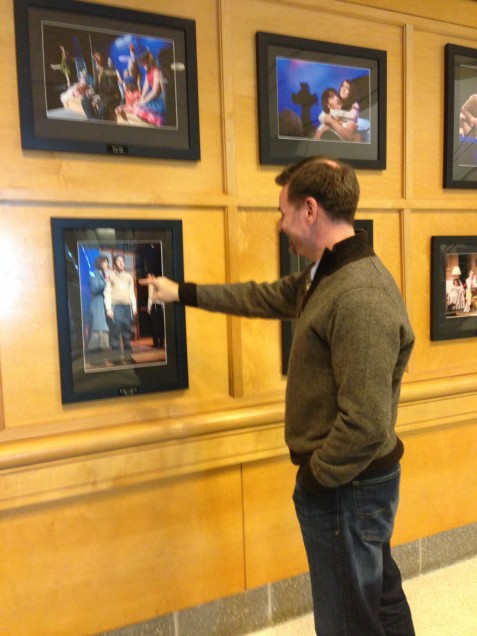 Theatre is as revered as athletics at Westford. Mr. Towers shows me his Theatre Wall of Fame. 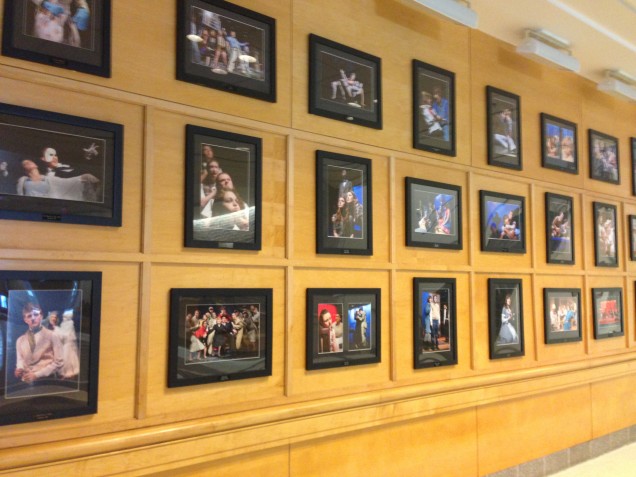 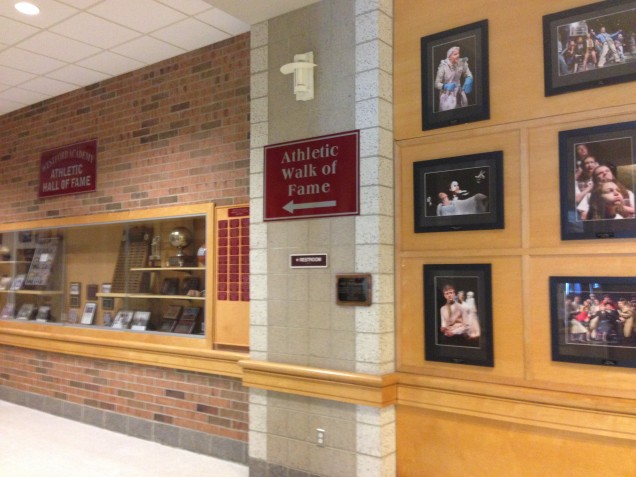 Westford's Athletic Walk of Fame ain't so bad, either. (This is just the edge of it.) 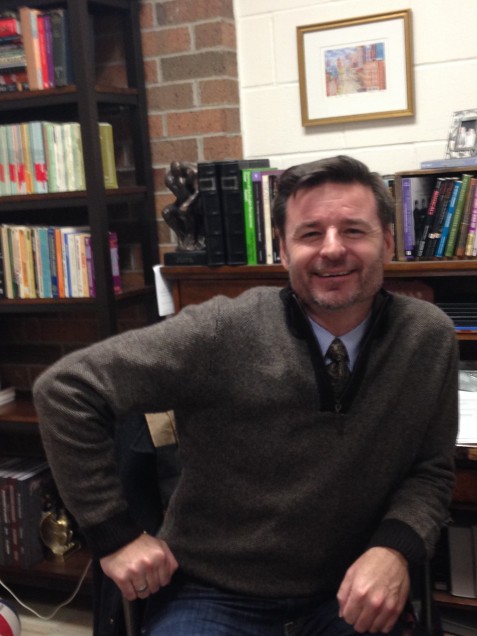 Mr. Towers in his office.

Plays by Melinda Lopez (Bad Santa, co-written with Maxine Lopez-Keough) and Michael Towers (The Contender) will be featured in An Evening of Theatre and Poetry on Dec. 8, at Lexington's Munroe Center for the Arts, part of its Munroe Saturday Nights series of events…

Lifers by Chicky and Guy (Maureen Cornell and our own John Shea) is part of Argo Productions' Triple Play: New Work Weekends Dec. 7-9, at BPT...

A new play by Karen Zacarías, Just Like Us(based on the best-seller by Helen Thorpe), will bow at the Denver Center Theatre Company’s 8th Annual Colorado New Play Summit Feb. 8-10…

Rick Park’s Go to Helen Hunt for It (part of Boston Theater Marathon XII) will be on the bill of February’s Snowdance Comedy Festival in Racine, WI…