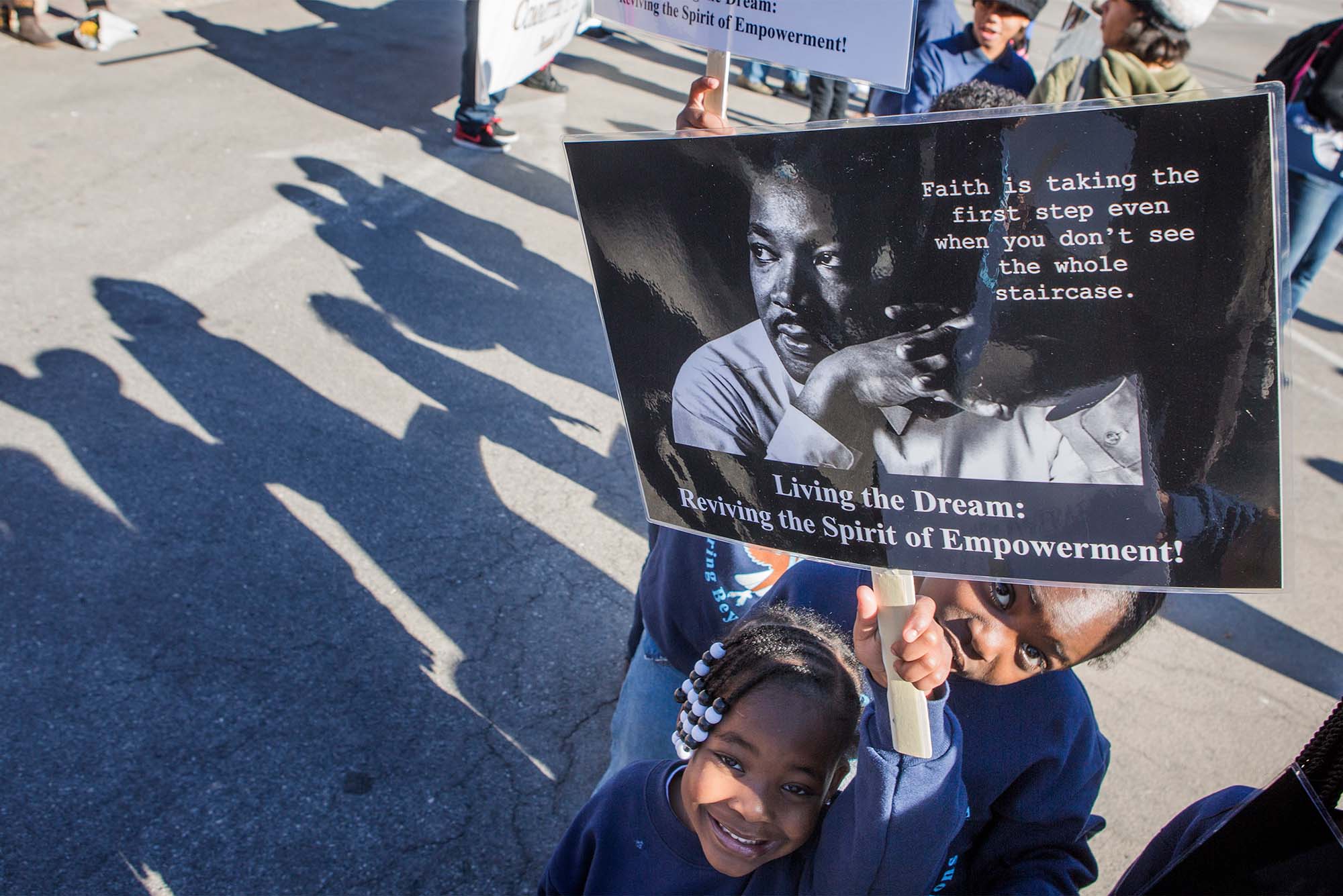 Why We Need More MLK in Schools, Not Less

As states like Virginia propose cutting Black and indigenous histories from school curricula, STH’s James McCarty makes a case for learning the whole truth about the BU alum’s message

Around the country, a battle is being waged in statehouses and local districts over which historic events and figures children should be learning about in public schools. Since January 2021, more than 40 states have passed legislation or taken other executive action to control what students can learn in school. Many of these bills and executive orders specifically mention “critical race theory”: an area of study that looks at America’s history and institutions through the lens of race, identifying the ways racism is embedded in those institutions. Despite many experts’ insistence that critical race theory is a fairly obscure graduate-level concept and not taught in K-12 schools, conservative political activists have still had some success wielding it as a tool to scare suburban parents who vote. They object, for instance, to the teaching of parts of America’s racial history that may create feelings of discomfort or guilt in white students.

Glenn Youngkin is both a perpetrator and a beneficiary of such tactics. The Virginia Republican centered his 2021 campaign for governor on parental rights to have a say in what the state’s public school students learn, forming critical race theory into a boogeyman that ultimately helped him defeat Democrat Terry McAuliffe. After assuming the governor’s office in January 2022, Youngkin made good on his promise to appoint a conservative statewide school board, which this fall released a controversial update to Virginia’s K-12 History and Social Sciences Standards.

The first draft of the new social sciences and history curriculum riled teacher groups and justice-oriented historians by omitting or downplaying the history of indigenous people in Virginia, eliminating lessons on racism and LGBTQ+ history, and even removing requirements that students learn about Juneteenth and the national holiday honoring Martin Luther King, Jr. (GRS’55, Hon.’59). After pushback from advocates, including the Virginia Education Association, the five-member school board restored some of the topics that were omitted and said that other topics could be added back at a later date. A board member said the omission of Martin Luther King Day and Juneteenth was due to an “administrative error.”

James McCarty, a School of Theology assistant clinical professor of religion and conflict transformation, sees something deeper at work. McCarty, who directs the STH Tom Porter Program on Religion and Conflict Transformation, has researched and written extensively about King. He says attempts to erase seminal Black histories and people from schools may be the newest front in the battle over public education, but students have been hearing a “sanitized” history of King for years.

BU Today: As a King scholar, what was your first reaction to hearing that initial drafts of Virginia’s public school curriculum mostly erased King from its K-5 history and social sciences requirements?

McCarty: My initial thoughts are that it is truly incredible to think that King, perhaps the most recent addition to the pantheon of American democratic heroes (if the Washington Mall is any indication), is not appropriate for students preparing to become citizens. King was a Christian pastor, a champion of democracy who secured voting rights for millions, quoted Thomas Jefferson regularly, and is an internationally influential voice for peace—but he’s too dangerous for youth to learn about? It raises the question of what is actually so dangerous about King. The most likely answer to that is his firm stance on behalf of racial justice, economic restructuring, and critiques of America’s militarism. In the era of critical race theory panic, all of these, especially the concern for racial justice, come to mind.

BU Today: Many students aren’t learning the full extent of King’s message, though, are they? Why is that?

McCarty: What most students learn about King currently is a sanitized version of his message focused on feel-good stories, his “I Have a Dream” speech, and a translation of radical nonviolent civil disobedience into acts of service. And even that, which if we are honest, is what K-5 students would get, is too dangerous for some. That says a lot about the values of those who fear his inclusion—even when they, like Youngkin, cherry-pick King’s quotes to justify their politics.

BU Today: Many histories taught in school lionize the ethics and teachings of Benjamin Franklin, Thomas Jefferson, George Washington, and other of this country’s founders. As an ethicist, what ethical lessons would you like to see kids learn from King?

McCarty: I love this question! King is better than most in helping us to see what it means to be a citizen of a pluralistic democratic United States of America. He gives us an example of how to draw on one’s own religious and cultural traditions while speaking to a pluralistic society. For King, these traditions include the histories of prophetic Christianity, from Jesus and St. Augustine to Reinhold Niebuhr and Howard Thurman [Hon’67], and the Black Church in the United States. He regularly put these traditions into conversation with the modern history of the Enlightenment and democratic thinkers like Jefferson, Washington, Kant, and more. This ability to speak from one’s own particular place in society while simultaneously speaking to the broader society is a skill and virtue necessary for pluralistic democracies to thrive.

Beyond this, I want children to learn about the power of social and moral imagination to transform the world. You don’t have to accept the world you’ve received. You can, through principled and organized action with others, make the world a more just and peaceful place. This work takes collaboration, risk, and creativity, but it is doable.

I want children to learn about the power of social and moral imagination to transform the world. You don’t have to accept the world you’ve received. You can, through principled and organized action with others, make the world a more just and peaceful place.

BU Today: What does the Virginia curriculum controversy (and similar attempts in other states to restrict content in schools) say about the larger moment America is experiencing, culturally and politically?

Back in the 1960s sociologist Robert Bellah argued that the United States goes through “times of trial,” in which its civil religion is tested and through which specific prophets get added to the American pantheon. The first such time being the founding, the second the Civil War and emancipation, the third the civil rights movement of the 1960s. We got Washington and Jefferson and the like from the first, Lincoln and Douglass from the second, and King from the third. About a decade ago social ethicist Jermaine McDonald argued we were in a fourth time of trial. This was during Barack Obama’s presidency and McDonald focused on the contestations over the role of Islam and Muslims in the United States. However, looking back over the last decade I think we can postulate that while McDonald was right that we might be in a fourth time of trial, it’s actually, at least in part, a fight over the status of the third time of trial—with Black Lives Matter, “Make America Great Again,” backlash to the Obama presidency, and the anti–critical race theory movement. In this sense, Virginia’s actions can be understood as an attempt to remove King (and others) from the standing he has had since about 1980 alongside Washington, Jefferson, Franklin, Lincoln, etc.

The question such a move raises is: what does it mean to be a “good” American? Part of what is communicated by this reversal of decades of practice is that Youngkin and Virginia might communicate that a life devoted to racial justice and peace is not what “good” Americans do. Rather, “good” Americans follow other role models. Who those might be is the question.

BU Today: What do you think Dr. King would make of the broader efforts to sanitize school curricula of certain aspects of American culture and history deemed “divisive”—such as LGBTQ+ history, the horrors of slavery and Jim Crow, or modern historic events like the murder of George Floyd? Did he write or say anything about attempts to sanitize or erase aspects of history that are inconvenient to those who hold power?

From early on in King’s public career, he drew on the long history of contradictions in American history: its achievements and advancements in democracy and also its failures to live up to its ideals, especially as it related to those descended from enslaved Africans. In a speech he gave in 1956 titled “The Birth of a New Age,” he said this:

“You will remember that it was in the year 1619 that the first Negro slave was brought to the shores of this nation. They were brought here from the soils of Africa and unlike the Pilgrim fathers who landed here at Plymouth a year later, they were brought here against their will. For more than 200 years Africa was raped and plundered, a native kingdom disorganized, the people and rulers demoralized and throughout slavery the Negro slaves were treated in a very [in?]human form. This is expressed very clearly in the Dred Scott Decision in 1857 when the Supreme Court of this nation said in substance that the Negro is not a citizen of the United States, he is merely property subject to the dictates of his owner.

Then came 1896 when the same court, the Supreme Court of the nation, in the famous Plessy vs. Ferguson Case, established the doctrine of “separate but equal” as the law of the land. Now segregation had moral and legal sanction by the highest court in the land and of course, they were always interested in the separate aspect but never the equal and this doctrine “separate but equal” made for tragic inequality. It made for injustice, it made for exploitation, it made for suppression…”

King was unafraid of telling the whole of US history because he understood that it enabled a realistic understanding of the present and is the reason for radical action in the present. As he liked to say, America wrote a promissory note that it was late in cashing. In addition, this way of telling our history is vital to a healthy democracy because it empowers people to take action for a more just world. The story of American history is in many ways the story of people creating a more just world through radical direct action over and over again. If we skip over the “whys” of these actions, we don’t understand what injustice looks like today or how we might overcome it tomorrow.

Why We Need More MLK in Schools, Not Less

Why We Need More MLK in Schools, Not Less
0
share this