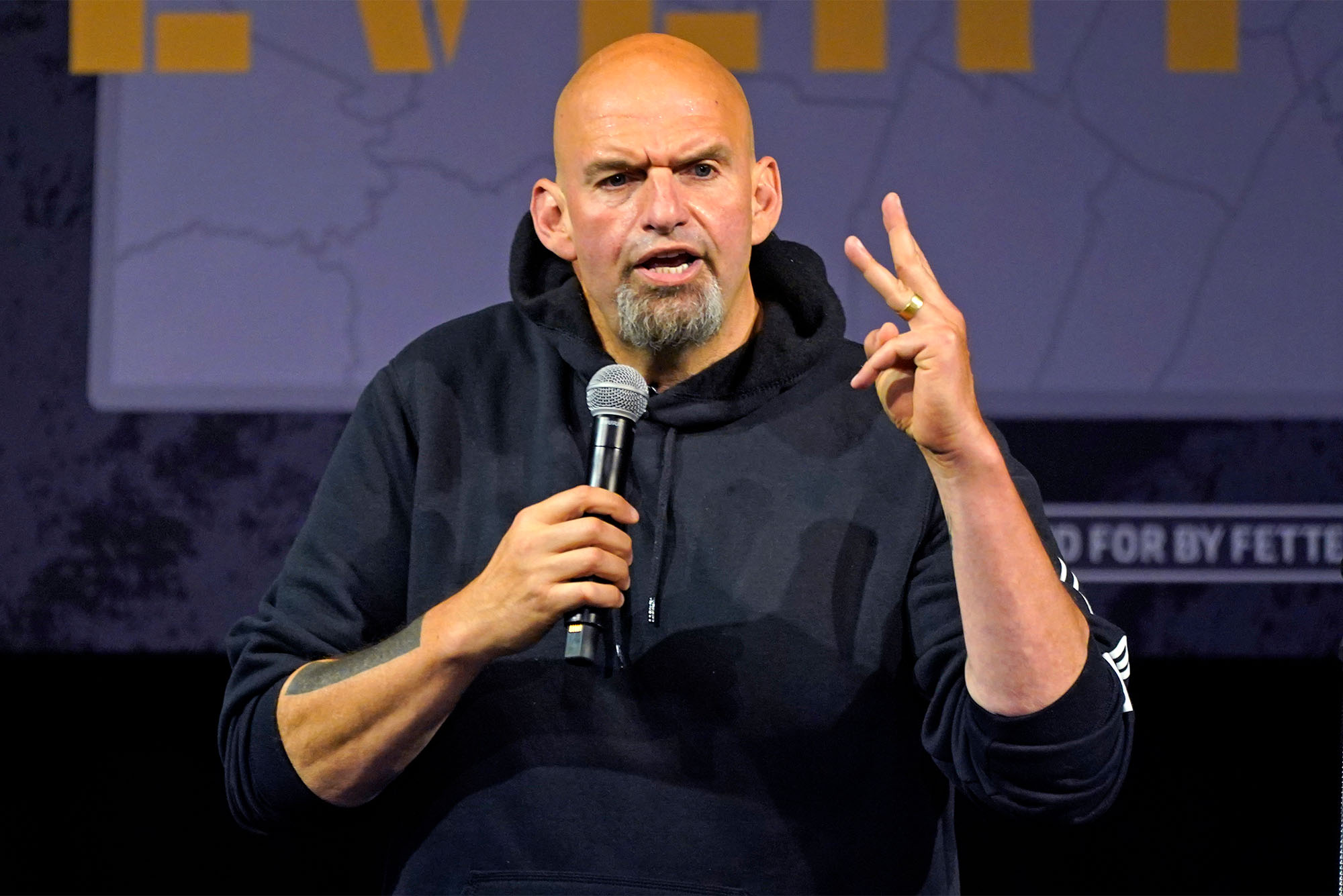 Pennsylvania Lt. Governor John Fetterman, the Democratic nominee for the state’s US Senate seat, is recovering from a stroke while campaigning. Photo by AP Photo/Gene J. Puskar

Steven Feske wanted no part of this story at first.

I said to him, “I’m writing about John Fetterman.”

“I’m not going to comment about him,” Feske replied, pleasantly but firmly.

Fetterman is the Pennsylvania Democratic candidate for the US Senate who had a stroke early in the campaign, and his health has become a key issue in the hotly contested race with Republican Mehmet Oz. Feske is a BU Aram V. Chobanian & Edward Avedisian School of Medicine associate professor of neurology and the neurology department vice chair for education. More specifically, he is an expert in stroke and cerebrovascular disease and critical care neurology.

With the way politics are, the outcome of the Pennsylvania race could very well determine control of the Senate and the future of President Biden’s term. In his and Oz’s debate last week, Fetterman was usually on point—and tough on Oz—but he used closed captioning monitors to help with auditory processing issues, and his speech was occasionally halting.

Feske made clear he would not diagnose Fetterman long-distance, based on TV clips, but he would talk generally about stroke recovery, the sorts of issues Fetterman and others who suffer strokes face, and why those issues are so difficult to anticipate.

BU Today: Why should we be very careful looking at Fetterman on television and deciding we know things about his condition? Why don’t we want to do that?

Feske: Without understanding a lot more about what happens, you can’t predict outcomes. Outcomes are very variable. They’re more variable with some aspects of function than others, but they’re certainly very variable with speech and cognitive function. And so I think you know, without a lot of other information, it’s impossible to opine in any way.

BU Today: Auditory processing disorder—tell us what that is, how it works, and why that results from a stroke.

Feske: Well, every cognitive function we have, every one you perform, requires neurological processing. And so saying something is a processing disorder is simply saying that a certain function is not acting properly in order for us to use language in the normal way.

That is, spoken language. We have to hear it, we have to process what we hear, we have to translate that into some sense of meaning, and then respond appropriately with some output. So, yes, that’s a complicated network of interconnections. And if there is any kind of lesion, whether it’s a stroke or a different type of lesion, anything that affects that network and affects that processing, that makes it not work properly, makes it work slowly.

BU Today: You said there is a very wide range of outcomes and timings and recovery possibilities here for people.

Feske: You have to realize that when you say somebody had a stroke, you’re using a very shorthand term for a lot of possible different things having happened to them. And so among the differences are differences in size. How big was it, how much brain injury did it cause, and also where exactly it was, because the brain is topographically organized—different parts of the brain do different things. And so, because there’s a variability in size, a variability in the location, and there’s also variability in different people’s anatomy and how they respond based on their age or other things [such as their other health].

BU Today: The majority of people who have strokes tend to recover with time and treatment, correct?

Feske: Most people who have strokes gradually recover. They may recover some functions better than others. If you take the language function, it tends to get better over time, and in a lot of cases it may get a lot better, very rapidly. In other cases it may continue to get better over weeks and months and even years. So that’s very variable. If you take somebody who has an injury to their vision, in the primary visual cortex, if it’s still there after a period of weeks, it’s probably not going to recover. Parts of the brain that are very specialized don’t recover well, and there are others that—I won’t say it’s not specialized, because obviously language is a very special thing, but it’s distributed and it’s organized in the brain in such a way that there’s the capacity for recovery.

There is more than one place in the brain that can fulfill certain functions. It’s distributed. Speech can be broken down into a bunch of sub-functions and those are not all localized in the same place. By being distributed, it’s possible to have a partial injury to the system, and the system may be tolerant to that sort of injury, and tend more to recovery compared to say, vision, where that’s less distributed.

BU Today: Is there any way for the average citizen to judge these things? Without being able to look at his chart or have the ability to diagnose his condition, how should people think about his ability to carry out the job? Do we just have to trust his doctor’s public statements?

Feske: That’s a good question. I’m not sure I have a good answer for it. Medical issues and privacy and what’s the right of the public to know—that’s a complicated thing, right? And it’s also that the attitudes about it evolved over time. So if you’re Franklin Roosevelt, you can almost get away with never being seen in a wheelchair. You can almost forget you have a disability, and in fact, that’s a disability that does not impair your ability to perform at a very high level. But nowadays there’s a lot of exposure, right? And so it’s very hard to not be seen.

Politicians nowadays feel somewhat responsible to release information about their medical condition, and have physician spokesmen talking for them. But I think you can see in the modern world that’s not always trustworthy. And so I don’t have an answer for you. I don’t know what the best way to do this is. But you don’t have a choice, I think, other than to either hear what people say, what their physicians say, and based on what you can gather from their comportment and whatever else you might use to judge their veracity. There are obvious examples of where you or I might make a decision that we’re being fed a story, and in other cases where you might trust what’s being said to you.

But I think with things that affect mental function, it’s a big problem, as people live to be older and medically healthy, and might develop dementias. There are well-known cases of people in the Senate, for example, where people may have been very competent senators for years, and people might doubt their capacity to continue with that. But the system doesn’t offer a way to address that, really, not a way that gets implemented. I don’t know the answer.