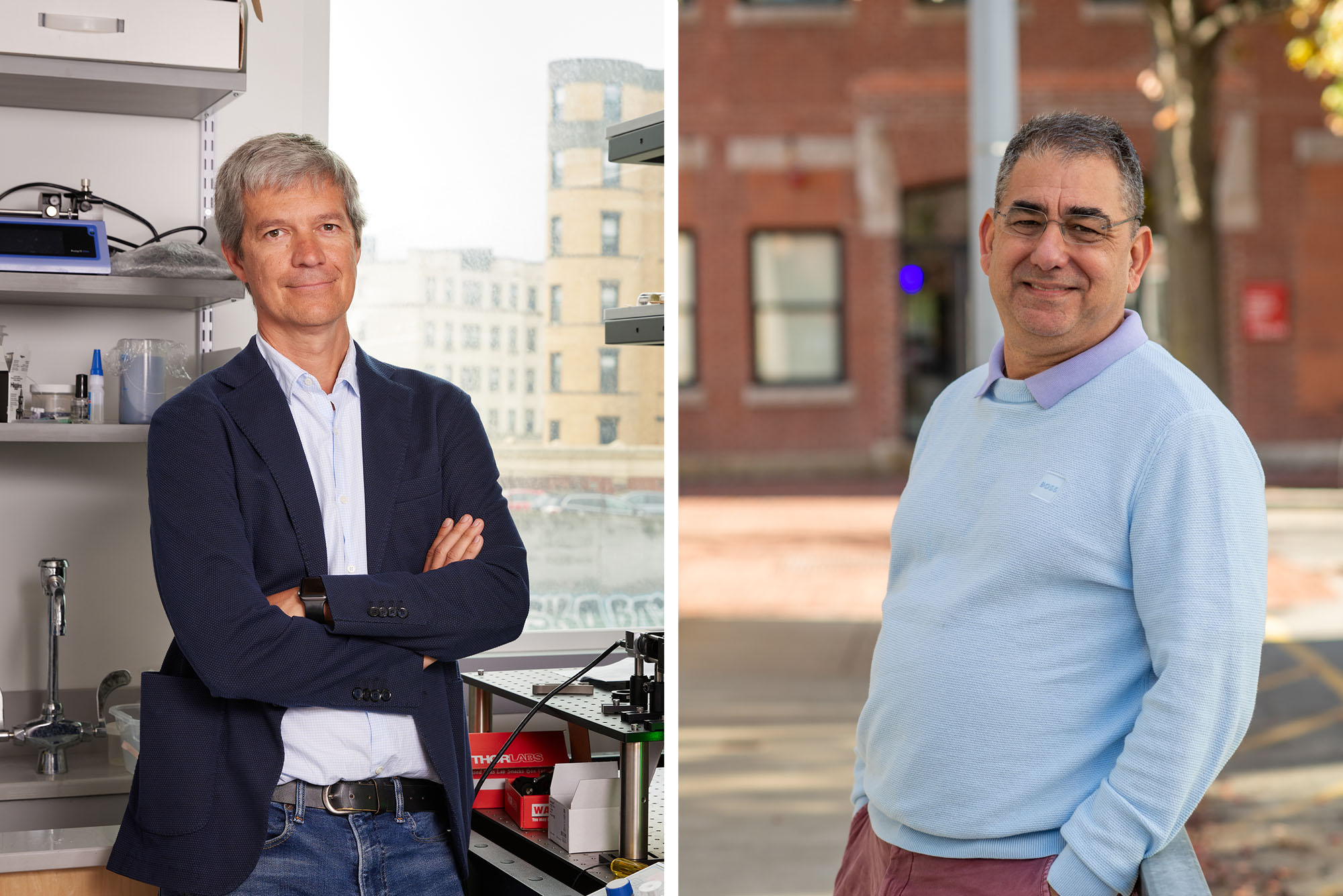 ENG’s David Boas (left) has been named the new Metcalf Chair for his transformative neuroscience research, while Ran Cantetti’s prowess in cryptography has earned him the Wang Professorship. Boas photo by Dana J. Quigley; Canetti photo by Cydney Scott

The last time BU named a scholar to its Arthur G. B. Metcalf Chair, Bill Clinton was president. The last person appointed Wang Professor was during the first year of the presidency of Clinton’s predecessor, George H. W. Bush (Hon.’89).

The faculty holding those seats retired four (Metcalf) and three (Wang) years ago, and now both chairs have new occupants.

Both professorships are for five-year renewable terms and provide support for recipients’ research and scholarship.

And from Boas: “I am, of course, quite honored to be recognized by BU in this way for the work that I have done. It also means a great deal to me that BU has the trust in me to use this professorship to help further enrichen the BU community. I’ll take this as a new challenge going forward.”

“David [Boas] is among the elite world leaders in all of neuroengineering and neuroscience,” Kenneth Lutchen, dean of ENG and a professor of biomedical engineering, wrote in nominating Boas for the Metcalf Chair. “David combines neuroscience, bioengineering, photonics and optics, imaging science, computation, and data science all to transform our understanding of brain structure and function” to develop treatments for diseases.

In a discipline dependent on numbers, numbers sum up Boas’s accomplishments, the dean added: his research has garnered 49,000 citations, including more than 300 papers with more than 10 citations each.

Boas’ research is supported by the National Institutes of Health and the National Science Foundation. He received his PhD from the University of Pennsylvania.

Both are pushing the boundaries of their fields and bring enormous talent, leadership, and innovation to their roles.

Similarly, Canetti is a transformative scholar in his field, wrote Stan Sclaroff, dean of Arts & Sciences: “There is no aspect of modern cryptography that has not been profoundly affected by the work of Ran Canetti.…As one measure of his impact, his page on Google Scholar lists over 43,000 citations to his work.”

Sclaroff cited Canetti’s work in online security protocols that “remain secure even when run in complex, messy network environments.…Internet standards like TLS, a protocol suite underlying every secure HTTP transaction conducted on the Web, are held to his criteria.

“Professor Canetti’s influence is felt in many other areas of cryptography, from message authentication via his HMAC design (used billions of times daily) to the definition and investigation of basic properties of encryption schemes.”

Canetti’s research is supported by the National Science Foundation and the Defense Department. He earned his PhD from Israel’s Weizmann Institute.

Announcing the appointments, Jean Morrison, University provost and chief academic officer, lauded the recipients: “Both are pushing the boundaries of their fields and bring enormous talent, leadership, and innovation to their roles. We look forward to their continued contributions and service in the years ahead.”

The Metcalf Chair is named for the late BU professor of engineering (Wheelock’35, Hon.’74), chairman of the board of trustees, and funder of the Metcalf Cup and Prize and the Metcalf Awards for Excellence in Teaching, the University’s highest teaching honors. The Wang Professorship bears the name of its funder, Wang Laboratories.