The Quest for a Heart Attack Cure

A BU-led team is engineering small patches of cardiac muscle that could repair the heart, treat heart disease, and speed drug development

Heart disease is one of the world’s most deadly and insidious killers. In the United States alone, it causes one in every four deaths nationwide—that’s a staggering 659,000 people each year, or roughly equivalent to the entire population of Portland, Ore.

It’s perhaps not surprising that the heart is so vulnerable to damage. It’s arguably the hardest working tissue in the human body: one of the first organs to form in the womb, it must keep ticking, without end, for the rest of our lives. Astoundingly, though, the cells within it can’t easily divide and reproduce. If damage occurs to any of them, that’s it—the injured region of tissue won’t be able to repair itself. Instead, the undamaged parts of the organ will limp along as best as they can until the bitter end.

“Once it’s damaged, heart tissue is basically gone forever. You’re just going to have to make do for the rest of your life with the healthy tissue that remains,” says David Bishop, a materials scientist at Boston University College of Engineering.

Bishop is the director of CELL-MET, a National Science Foundation Engineering Research Center in Cellular Metamaterials led by BU, which is focused on developing treatments for cardiac disease. Together, Bishop and his colleagues are taking a bold new approach: growing viable heart tissue in the lab from scratch. If their efforts are successful, he says, the team will be able to create small patches of cardiac muscle that could be transplanted directly into patients’ hearts, effectively mending the damaged areas of the organ.

This method would be an entirely novel way to reverse heart disease, says Bishop, an ENG professor and head of materials science and engineering. “If you break your leg, your doctor will talk about fixing you up as good as new. If you have a heart attack, though, you’ll never hear those words, because right now there isn’t any way to fix that damage,” he says. “Our dream is to build a cure for heart attacks.”

Creating implantable heart patches comes with a long list of challenges, beginning even at the most basic cellular level. Normally, when foreign tissue is grafted into a patient’s body, the immune system—especially without intervention from immunosuppressant drugs—will recognize its cells as invaders and attack them. If that happens, it will gradually kill the implant, and potentially take its host along with it.

To avoid this problem, CELL-MET researchers plan to use a patient’s own skin cells as a starting point. Through a complex biological process, the group can reprogram those cells, turning them into pluripotent stem cells—a sort of universal cell that can become almost any kind of tissue in the body. From there, the researchers can slowly coax the cells into becoming cardiomyocytes, the pulsating muscle cells that do the bulk of the heart’s work. Because they originated from parts of the patient’s own body, there’s almost no chance that the newly formed cells will trigger an immune response.

The procedures involved in making those cells are nothing new: scientists have already been doing it for more than a decade. Turning them into working tissue, however, is a different story. You can’t just plop heart cells into a dish—if you want them to grow into healthy cardiac muscle, they need to be anchored onto a structure with just the right physical properties.

“Heart cells are what we call mechanically active: they need to contract and generate force as they grow. The way they develop is greatly impacted by their mechanical environment,” says Christopher Chen, a BU William F. Warren Distinguished Professor and an ENG professor of biomedical engineering. “If that environment is too rigid, a cardiomyocyte won’t be able to contract. You need scaffolding that’s stiff enough to support the cells, but soft enough that it can crunch down when the cells pull on it.” With the right materials and structure to support them, adds Chen, who is also deputy director of CELL-MET, the cardiomyocytes can more easily mature, align themselves into strings of muscle, and start beating in unison.

To provide this sort of environment, the CELL-MET team is making a fleet of tiny structures called scaffolds. Each one is only a few microns wide, and acts like a miniscule frame that nestles cells inside it. In order to make detailed structures this small, the team has turned to nanoscale 3D printing techniques originally developed for the semiconductor industry and recently commercialized by Nanoscribe, says Alice White, an ENG professor and chair of mechanical engineering.

White is leading a team testing several different materials and patterns to help enable healthy tissue growth—from a nest-like cluster of nanofibers to a more complex engineered honeycomb—and using them to help CELL-MET colleagues create early proof-of-concept heart tissue patches. At the moment, these experimental patches are just a few hundred cells thick, White says—one of the remaining hurdles is figuring out how to make them closer in scale to actual heart tissue, which can be on the order of one centimeter (roughly half an inch) thick.

“The main problem there is vasculature. To get thicker tissue, you need blood vessels and nutrients inside a block of cells. That’s where the difficulty level really starts to ramp up,” she adds. “That’s the next challenge we’ll be working on.”

CELL-MET researchers are currently attempting two ways of creating blood vessels within their patches. One involves White’s carefully designed scaffolds; the other involves 3D printing cells themselves. Using a slurry of cardiomyocytes as a “living ink,” the group could potentially lay them down in layers that mimic the shape of living heart muscle, building tissue with hollow paths inside that could act as nascent blood vessels.

While existing thin patches of heart cells can’t be implanted, says Chen, they may still be useful for developing drug therapies. It’s fairly common for new drug candidates for a wide range of diseases to have major side effects on the heart—but the standard process of testing those substances in animals can sometimes obscure these effects until the drug reaches clinical trials.

“The problem is that the human heart can react very differently to a drug than animal heart cells,” Chen says. “It’s very possible to miss something. If you do, you’ve wasted a huge amount of resources developing a compound that ultimately turns out to be toxic to cardiac tissue.” Lab-made human heart tissue, however, might help researchers catch those issues early, making drug development faster and more accurate.

CELL-MET’s heart patches might also help scientists better understand rare heart diseases in the first place. By using skin cells taken from patients with congenital heart diseases, Chen says, the group could re-create the cardiac abnormalities that exist in their body, and test new treatments directly in a patch of diseased tissue.

Even though implantable heart tissue is still a ways off, the fact that CELL-MET has made so much progress in five years is remarkable, says Bishop.

To tackle a problem as thorny as growing heart tissue, the center has had to bring together a massive team of researchers from 14 institutions around the globe. They specialize in many different disciplines—biology, electrical engineering, computer science, nanotechnology, chemistry, and the list goes on. 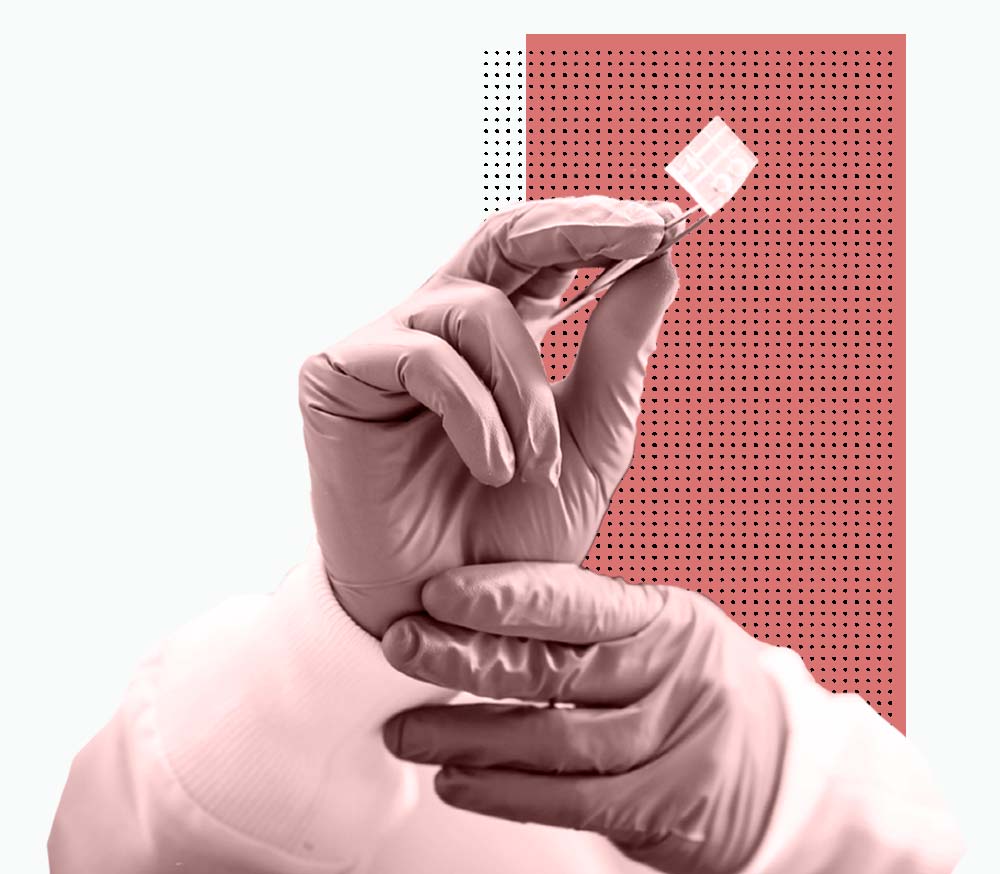 “I think a lot of our success comes from the fact that we’re doing transdisciplinary research. We’ve all stopped thinking about our individual fields, and started thinking about solving a common problem”

So far, this approach seems to be working. In addition to their early heart tissue patches, those collaborations have already resulted in a living heart chamber replica, tiny heart valves on a chip, new nanoscale 3D printing methods, and other advances. It has also led to some offshoot discoveries, including a new contactless electrocardiogram that can sense the heart’s electric field using magnets, and is now being developed by a company spun out of Bishop’s lab. Each of these incremental steps represents a major scientific achievement, and may help scientists create other types of organ tissue in the future.

“I think a lot of our success comes from the fact that we’re doing transdisciplinary research. We’ve all stopped thinking about our individual fields, and started thinking about solving a common problem,” says Bishop. “In the old days, you would have called it a skunk works—you put 100 people with different expertise into a warehouse in Nevada, and together, they come up with an airplane nobody thought was possible. No one says, ‘I’m a wing person,’ or ‘I’m an engine person,’ you’re just all part of a team working on a common problem.”

To foster that kind of thinking in the future, CELL-MET is focusing a large part of its mission on educating new generations of students. Teaching others to think across disciplines, Bishop notes, may lead to new innovations that would otherwise be impossible to achieve. They’re starting not only with undergraduates, but also younger students, offering a range of education and outreach experiences, from preschool STEM programs to high school science lessons.

“Our work goes beyond just creating cardiac patches. We hope it will be a role model for how to do research going forward,” Bishop says. “Our education, diversity, and outreach programs—training the inclusive workforce of the future—are a vital part of that. Inclusion is also critically important to the cardiac tissues themselves—there are significant demographic differences that we study and need to consider in what we are building.”

Between its work in the lab and in the classroom, the center’s efforts might eventually prove pessimists everywhere wrong. Maybe, just maybe, a broken heart can be mended.

The Quest for a Heart Attack Cure

The Quest for a Heart Attack Cure
2
share this