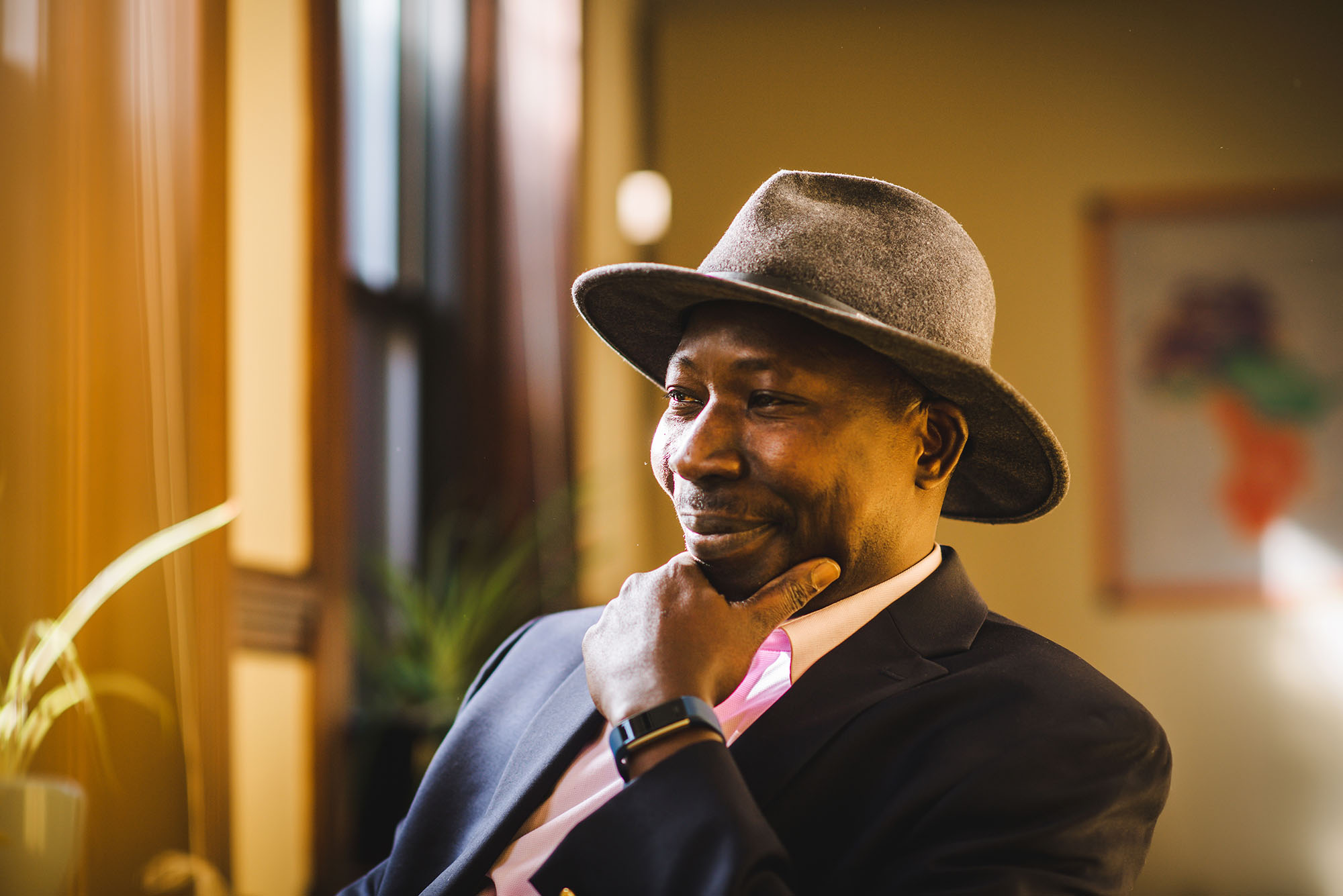 Fallou Ngom, a Boston University College of Arts & Sciences professor of anthropology, first found evidence of Ajami in a note among his late father’s belongings. The discovery meant that his father, and many African people written off by official government authorities as illiterate, were in fact communicating in a language all their own. Photo by Jackie Ricciardi

When his father died in 1996, Fallou Ngom returned to Senegal from where he was teaching French and linguistics at Western Washington University in Bellingham, Wash. Ngom participated in the funeral services, spent time with his family, and collected some of his father’s belongings to bring on the daylong flight back with him.

A box of his father’s old papers—various to-do lists, dashed-off ideas, deeds, receipts, and other ephemera that collect throughout a life—lay dormant in a corner of Ngom’s office for nearly a decade before he opened it. He couldn’t have known it at the time, but waiting for Ngom inside this box was a scrap of paper that would alter the course of his life and the lives of countless others.

In 2004, when he dusted off the box and sat down to sift through these tokens of his father’s life, Ngom found something confounding: a note, scribbled in his father’s hand, about a debt he owed a local trader. The note was doubly surprising. First, Ngom had thought his father was illiterate—he didn’t read French, the official language of Senegal. But the note wasn’t in French, it was in a script that looked like Arabic, but sounded like Wolof, a regional West Atlantic language.

Shaykh Ngom, Fallou’s father, wrote that he and his wife would have another son, named Usman Ngom, in this journal entry from 1981. (He was right.) Photos courtesy of Fallou Ngom

Ngom, who studied Arabic as a second language (the 2nd of 12 languages that the scholar knows), was stunned. He asked his brother, still living in Senegal, to check with the neighbor to whom their father owed money. Sure enough, his brother reported, the trader had a record of the debt, too, in a similar Arabic-turned-Fula script.

“That’s when I realized: we’ve been told that these people are illiterate, and they’re absolutely not,” says Ngom, a Boston University College of Arts & Sciences professor of anthropology.

Ngom needed to know more. He applied for a postdoctoral fellowship in 2004 to travel to West Africa and dig into this surprising writing system. Tellingly, it was BU’s West African Research Association that granted Ngom’s postdoc—albeit years before he would join the University’s faculty.

He found this modified Arabic script everywhere. Shopkeepers kept records with it and poets wrote sprawling verses in it. Ngom discovered religious texts, medical diagnoses, advertisements, love poems, business records, contracts, and writings on astrology, ethics, morality, history, and geography, all from people who were considered illiterate by the official governmental standards of their countries.

Among the thousands of Ajami documents archived by BU researchers is an address book of the late Nimbaly Thiam, provided by his son, Abdou Karim Thiam. The phone numbers listed are no longer in use as the text is over 40 years old. Photos courtesy of the Ajami Research Project

What Ngom realized—slowly, and then with a bang—is that his father’s notes were just the beginning. He had proof that a centuries-old writing system was still thriving in many African countries.

In the same way that the Roman alphabet has been adopted to write English, French, and Spanish languages, Ngom’s research revealed that people in Senegal, Guinea, Nigeria, and other parts of West Africa use a modified Arabic alphabet to write in a number of local languages: Wolof, Hausa, Fula, Mandinka, Swahili, Amharic, Tigrigna, and Berber among them.

It was an enormous discovery. This writing system, called Ajami, dispelled the false notion peddled by European colonialists that large swaths of communities in sub-Saharan Africa were illiterate, with no native written languages of their own.

Some of the documents Ngom found on subsequent trips to the continent showed that their authors were code-switching throughout the text: writing in strict Arabic and in its modified Ajami form. Not only were such writers literate, they could also read and write in multiple languages.

“It was shocking,” says Ngom, who has helped build a vast digital library of Ajami texts at BU. “It was so shocking to me when I realized how misguided I was as a result of my training, which is a French-based system. But not only were my dad and many people like him documenting their lives, many highly educated people were using Ajami to write poetry, literature, these kinds of things.”

People have been using the language to record the details of their daily lives since at least the 10th century, and still use it today. It’s a grassroots writing system, he says, one that’s not taught in schools. Even though he grew up in Senegal, Ngom didn’t know the writing system existed until he came across his father’s notes in 2004.

Not only were my dad and many people like him documenting their lives, many highly educated people were using Ajami to write poetry, literature, these kinds of things.

Ajami, from the Arabic word ʿAjamī, meaning “non-Arabic” or “foreign,” was created centuries ago by Islamic evangelists to spread the religion to African communities. Over generations, it was adopted by members of anti-colonial nationalist resistance movements throughout the continent, as French and English colonists installed their own languages and customs.

Take the Mouride brotherhood in Senegal. By the end of the 19th century, French authorities in Senegal—who had expected the Sufi movement to fizzle out—were concerned about the group’s growing numbers and resistance to colonial rule. The Mouride brotherhood thrived, despite French attempts to quell the movement. Now, the group has a headquarters in Touba, a holy city for the order.

“The Mourides are one of the most studied groups in academia,” says Ngom, because of their unexpected resistance and staying power. “There is a lot of work on the Mouride, but none in the Mourides’ own voices, about why the movement didn’t fail as it was expected to. But it is actually in their Ajami text, they tell you why!

“They were trained through Ajami texts that were read and recited and chanted in rural villages. They were communicating messages that the French could not understand. And those messages were about resilience, self-sufficiency, and work ethic. That’s what made the movement succeed,” Ngom says.

It’s always been right there, in plain text. It just took someone who could read those texts to see it.

The Library of Ajami—at BU

The documents that Ngom and other researchers—including BU’s Daivi Rodima-Taylor, project manager for the Ajami Research Project and director of the BU African Studies Center’s Diaspora Studies Initiative—give light to African people’s view of their own history, a view that has long been obscured by the prevailing narrative found in postcolonial literature and history books.

“There have been ongoing discussions about African sources of knowledge, and this component has really never been taken seriously until now,” says Ngom. “So, for example, sources of African history have been European sources, primarily. But this is the first time we have a substantial number of documents produced by Africans dealing with those same issues on which their history has been written. And at BU, we are the leaders in this effort: we have documented over 30,000 pages from Africa.”

The University is also leading the charge to teach scholars how to read these documents, a massive (and massively important) undertaking. Under Ngom’s leadership, BU offers the only Ajami program in the United States.

“The first thing I did at BU was to make sure our students benefit from the training that allows them to read any script in this language,” Ngom says. “They’re trained to read any text: Roman script or in traditional Ajami script, and that ensures that their research is more inclusive of the voices of people whose countries they study.”

To augment translation of the texts, researchers at BU enlisted volunteers from countries in West Africa—people who know and use the Ajami scripts every day.

“One of the important aspects of this work is revealed when our collaborators reflect about this participatory and collaborative endeavor,” says Rodima-Taylor, who is also a research associate at the BU Pardee School of Global Studies. “We hear about how challenging it is to interpret some of those texts and at the same time, how rewarding this process is.”

In 2019, the researchers won a grant from the National Endowment for the Humanities to expand BU’s digital library of Ajami texts, videos, and translations. This year, the team won another award, from the British Library’s Endangered Archives Programme, to digitize another 50,000 pages. In 2020, they were awarded a three-year grant by the US Department of Education to develop Ajami projects in Hausa, Wolof, and Mandinka, each with a multimedia companion website. Over the years, Ngom has also won prestigious Guggenheim and Fulbright fellowships to continue the work.

It’s not just BU students and faculty who benefit: thousands of scholars around the world—from the University of North Carolina at Chapel Hill and Duke University in the United States to Usmanu Danfodiyo University Sokoto in Nigeria and Addis Ababa University in Ethiopia—have used this repository to spark new research.

Others, including one native Hausa person writing from Kano, Nigeria, simply thanked the BU researchers for helping him to understand the work of his late father, an Islamic scholar and calligrapher who worked tirelessly to preserve documents in the Hausa Ajami script.

For Ngom, this work is rewarding, if painful.

“To me, there’s justice in making these voices heard,” he says. “For so long, they weren’t. And my attention has shifted completely to making it happen.”

There are 19 comments on Unearthing a Long-Ignored African Writing System, One Researcher Finds African History, by Africans