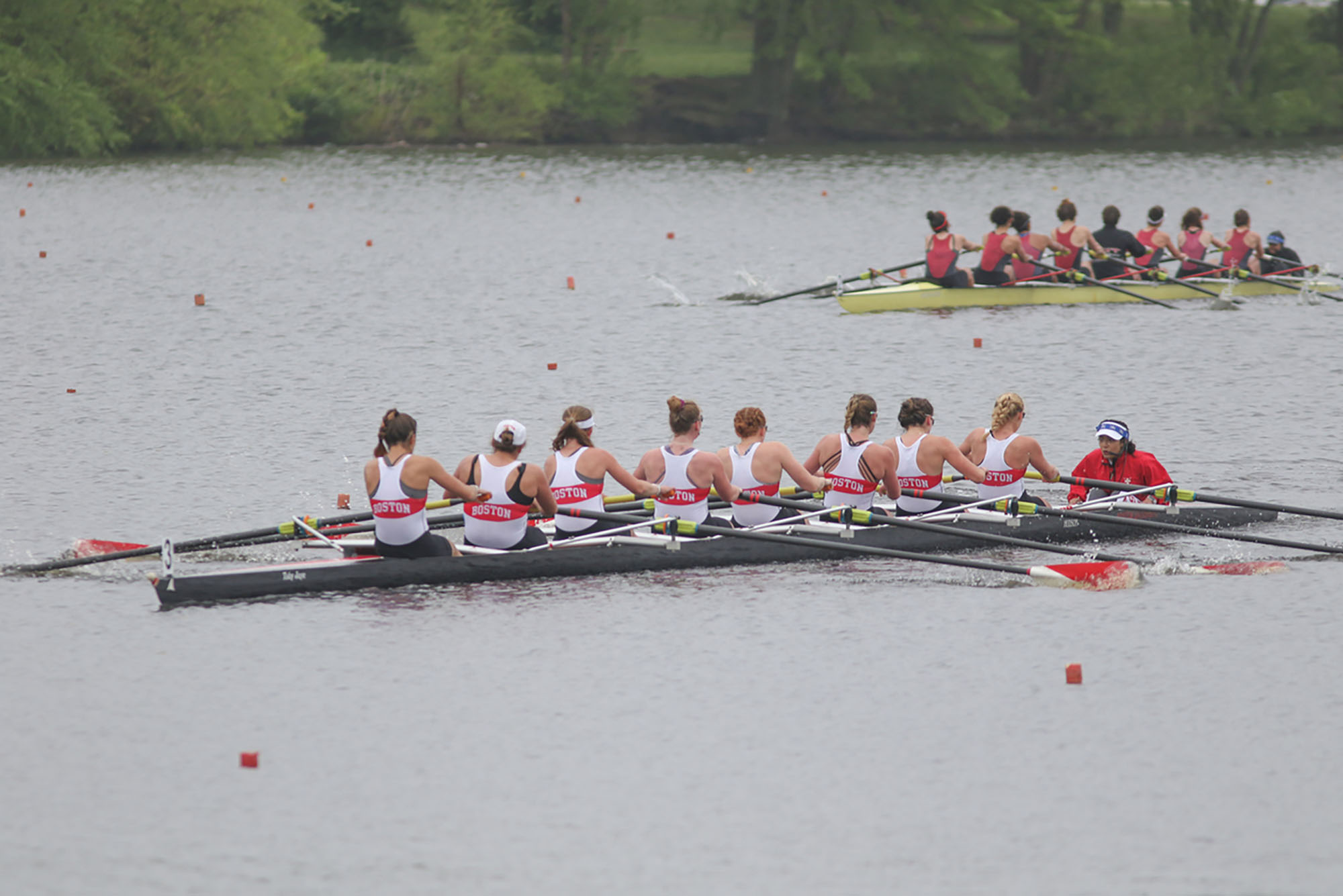 “The beauty of rowing is that it’s not like other sports where there’s a defense. There are no people trying to stop you from scoring. You get to show what you’re made of, how hard you worked, and how strong and tough of a team you are,” women’s lightweight rowing head coach Malcolm Doldron says. Photo by BU Athletics

Commencement has passed, and 19 of Boston University’s 22 varsity athletic programs are out of competition for the summer—but there are still a few more titles to contend for. BU’s three rowing teams will be in action over the next two weeks for the final events of the spring calendar.

The Patriot League champion BU women’s rowing team will compete in the NCAA Division I Rowing Championship in Florida from May 27 to 29, and the women’s lightweight and men’s rowing teams will participate in the Intercollegiate Rowing Association (IRA) National Championship Regatta in New Jersey from June 2 to 5.

For the women’s rowing team, it will be their first trip to the NCAAs since 2014, when BU won its first Patriot League title. Madeline Davis Tully, fifth-year head coach and the 2022 Patriot League Women’s Rowing Coach of the Year, says she is glad to have the program back on top of the conference.

“We’ve had a great group of athletes on the team and especially the seniors, who have been really dedicated to this goal specifically of winning the Patriot League championship and getting BU back to that position,” she says. “To see this come to fruition for that group in particular has been really rewarding and fun, because they put so much of their heart and soul into making this happen.”

Bianca Saffirio (CAS’24) rowed from the bow position for the varsity eight boat that sealed the title with a runner-up finish, crossing the line between Bucknell and Navy by just a matter of seconds. For as exciting as the race was, Saffirio says she was focused entirely on her own performance.

“If I started looking around, I’d just get distracted,” she says. “If I see that we’re ahead, I get too excited. If I see what we’re behind, I get too scared. I didn’t want to find out until the finish line.”

Davis Tully says everyone played a part in the win: “The whole squad really contributed to this and pushed those top three boats to be able to perform like that. It was a total team effort.”

“We could see improvement week after week,” Saffirio adds, “and it was so rewarding.”

The team-first attitude has been reflected in the women’s lightweight rowing program, as well. Through the ups and downs of a competitive schedule that began at the Head of the Housatonic on October 9, head coach Malcolm Doldron says he is proud of the way his group has navigated the year.

“I truly feel that this is probably the most resilient group that I’ve coached,” he says. “Challenges are to be faced, not run from. They have really, really stepped up and dealt with everything that we have gone through this year.”

The team’s spring has been highlighted by a sweep of Boston College on March 26, a pair of victories at the Knecht Cup on April 10, and the team’s fifth-straight Beanpot win over Harvard and MIT on April 16. Going into the IRA championship, Doldron says there is something special about the final event of the season, and the stage presented through this elite regatta.

“The IRA is the culmination of an entire year. For the seniors, it’s kind of a culmination of the entire four years,” he says. “It’s the opportunity to compete against the best in the country. You’re essentially competing against some of the best lightweights in the world.”

On the men’s side, the Terriers have hit their stride in the second semester with wins over Oregon State on April 9, Brown on April 16, and Wisconsin for the Jablonic Cup on April 30. Head coach Tom Bohrer says he is confident his group can be a top-10 team in the country at the IRA regatta.

“I think probably in the last three or four weeks, the work that we’ve been doing throughout the year since we got back in September has really started clicking now,” Bohrer says.

At the same time, the coach says this weekend can be a springboard for the future of his team.

“This experience that they’re getting now is kind of setting us up for next year,” he says. “I’m pretty happy with how these underclassmen have been developing, and when you see the progress that we’re making, it’s encouraging.”

In the short-term, Davis Tully can speak for all the teams in saying that she is excited to see her squad row alongside the nation’s best programs this weekend.

“Our goal is to have our fastest races of the year at the end of the year, and on the biggest stage,” she says. “It’s our chance to see the top competition from across the country, and also to line up against some rivals that we’ve seen already and get another chance to see how we’re doing against them.”

Learn more about BU’s three rowing teams and their upcoming competitions on GoTerriers.com and on Twitter through @TerrierWROW, @TerrierMROW, and @terrier130row.

There is 1 comment on BU Rowing Teams Continue Trophy Chase