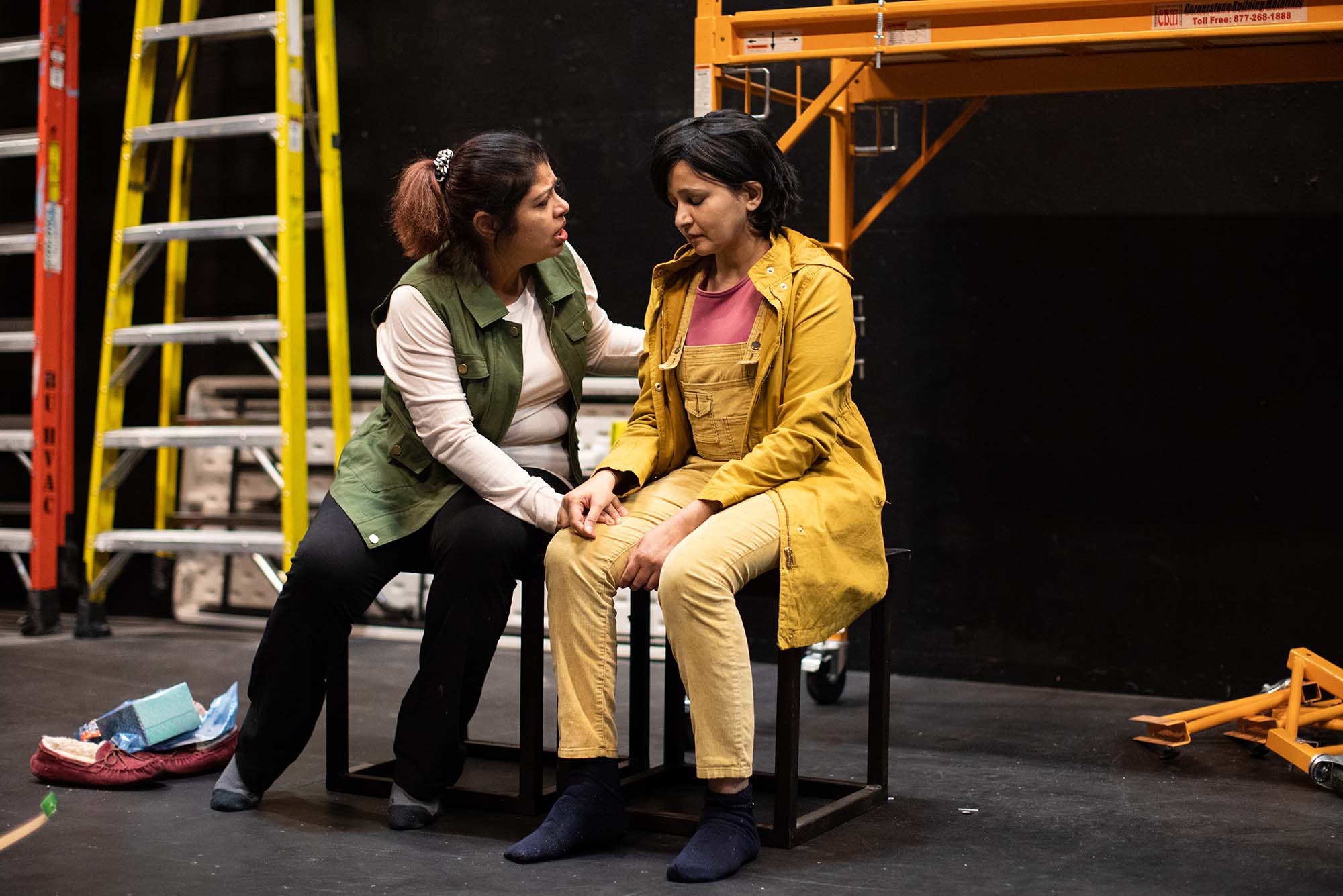 One of the 50 plays is titled Drop the Mask, but you still can’t do that at Boston Theater Marathon XXIV.

After two years of virtual performances because of COVID, the annual showcase of short plays returns to live, in-person theater on Sunday, May 1—and to its original home on the Charles River Campus, Boston Playwrights’ Theatre (BPT). The audience will still be masked as a precaution, and attendees will need to show proof of vaccination to get into the theater. (Theater-goers who want to view the plays virtually can livestream the event for a reduced price.)

The actors on stage will be maskless, though, and everyone will be in the same room. The organizers say hallelujah to that.

“It has been a long time away,” says Marathon artistic director Kate Snodgrass (GRS’90), a College of Arts & Sciences professor of the practice of playwriting, who is also Playwrights’ Theatre artistic director. “We’re thrilled to be back in person.”

The marathon of 10-minute plays supports the Theatre Community Benevolent Fund, which has helped many local theater artists deal with COVID disruptions over the last two years. With 50 playwrights given full rein for their imaginations, the pandemic plays out on stage in one way or another in works such as Drop the Mask by Bill Lattanzi (produced by Liars & Believers) and Virginia Slim and Ten Minutes To Go by Kevin Cirone (produced by Titanic Theatre Company), but less so than in the last two years.

“I would say to a great extent they have put it aside,” Snodgrass says. “From my reading at least, so many of the playwrights really want to be back to normal, back to what matters to them personally. There’s a lot of family, there’s a lot of love, the comedies are very funny.”

How we all changed during quarantine is the focus of Rewilding, by Boston-based playwright and educator Samantha Noble (GRS’17), produced by the American Repertory Theater.

“It comes out of the last couple of years and being in quarantine, and the experience that you have when you are left alone with yourself in that way and—if you have the resources to do so—using that time to sort of figure yourself out again,” Noble says. “You suddenly have time to look at, who am I, actually, when I’m not being told who I am and who I need to be?

“It’s the idea of coming back and reconnecting with people as a more authentic version of yourself,” Noble adds, starting to laugh. “But, as the actors have been saying to me, it’s kind of a more feral version of yourself. You’re a little weird.”

The Marathon is the Theatre Community Benevolent Fund’s largest source of support, and “community” is definitely the key word for the event. The plays are put on by Boston-area theater companies, ranging from the Huntington Theatre Company and the American Repertory Theater down to fringe troupes. Writers include well-known names such as Patrick Gabridge, Steven Bogart, David Valdes, and Kirsten Greenidge, a College of Fine Arts assistant professor of playwriting and of theater arts.

Needham-based Arlekin Players Theatre, an artist­-driven company comprising immigrant actors from the former Soviet Union, will join the Marathon for the first time, closing out the event with a 10-minute tribute to the Ukrainian artists who are still making art even during the Russian invasion of their country.

COVID made the need much greater

The Theatre Community Benevolent Fund was established in the late 1990s to help local theater artists facing disasters such as a medical emergency, a stolen laptop, or a house fire. But when the pandemic hit and closed local theaters, the fund stepped in to help artists who suddenly lost their livelihoods and didn’t know how they would pay their bills.

“Historically, we would receive around five requests in a calendar year. In the first year of the pandemic, we received dozens,” says Alex Lonati, president of the fund’s board, and also SpeakEasy Stage Company community programs and events manager. “From March 2020 to July 2021, we awarded over $250,000 in unrestricted emergency funding.”

“So many of the playwrights really want to be back to normal.”

Lonati says that while arts organizations have since begun to resume operation, artists continue to face financial insecurity and long-term effects from the pandemic. “TCBF continues to receive a steady stream of applications, although the donations that keep us viable have slowed,” Lonati says, which is why the Marathon is so important.

While COVID increased the demand for the fund’s help to an unprecedented level, it also meant no in-person Marathon. But even when organizers switched to Zoom versions that stretched out over weeks the last two years, those pandemic-year Marathons raised several times more than previous years—$56,000 in 2020 and $21,000 last year.

“Thank the quarantine and the kindness of people banding together in a time of need,” says Snodgrass. “When we help them, we help ourselves.”

“All of the money raised goes directly back to artists in need,” Lonati says. “The Marathon is essential to our success as an organization, and we are so excited it will be returning live and in person this year!”

Again with the pandemic in mind, the organizers are breaking up the Marathon into five blocks of less than two hours each. Each block will be ticketed separately, allowing people to stay for as little or as much as they want, and there will be breaks between the blocks to air out the theater. This year also marks a return of the Marathon to BPT after more than a decade at the Boston Center for the Arts Calderwood Pavilion.

“We have as good a filtration system as you can, here at BU,” says Snodgrass. “We have outside air coming in and out all the time. We hope that we are keeping everybody as safe as possible.”

Marathon of 10-minute plays by New England playwrights and theater companies to benefit the Theatre Community Benevolent Fund. You can buy a ticket for any or all of the five blocks (each block is $20 in advance/$25 the day of the event, fees apply) and each block features 10 plays and runs approximately 100 minutes. You can also purchase a ticket to the livestream ($10, fees apply).