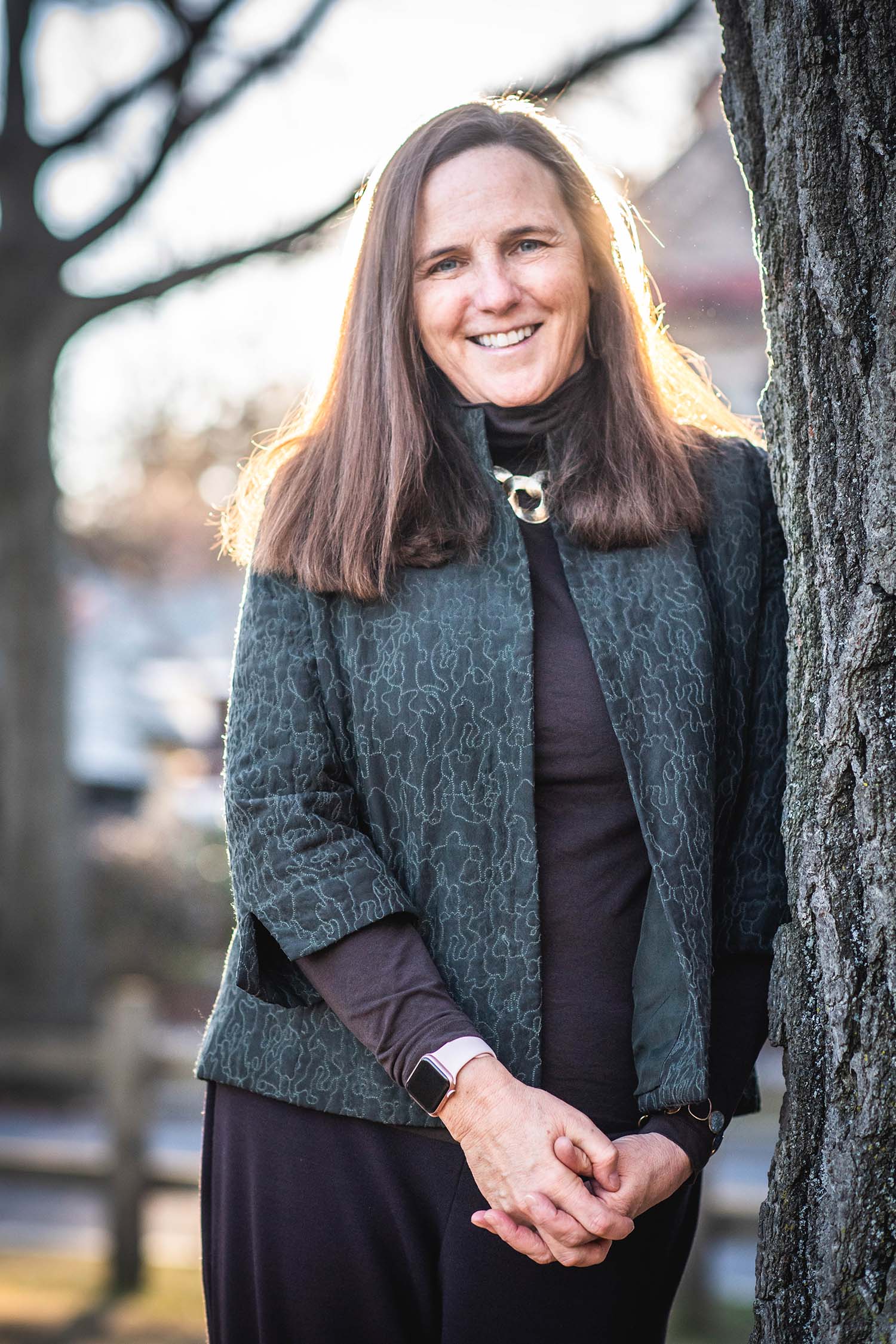 BU School of Law Professor Katharine Silbaugh cosponsored a Brookline, Mass., ordinance that ties being able to buy tobacco to birth date, not to age. Anyone born after January 1, 2000, cannot legally buy tobacco or vaping products. Photo by Jackie Ricciardi

BU’s Katharine Silbaugh has dedicated much of her work to safeguarding adolescents and their health.

That commitment became tangible policy in fall 2021, when the town of Brookline put into practice a first-in-the-nation ordinance that ties the right to buy tobacco to a person’s birth date, not their age. Anyone born after January 1, 2000, meaning anyone who turned 21 since January 1, 2021, is not able to legally purchase cigarettes or vaping products in Brookline—ever.

Silbaugh, a School of Law professor, a Law Alumni Scholar, and an expert on family law, adolescents, gender and household labor, cosponsored the ordinance with another Brookline resident, pharmacist Anthony Ishak. The goal of the ordinance is to prevent young people in Brookline from adopting a highly addictive habit that could kill them later in life. Cigarettes have been shown to kill nearly half a million Americans every year and cost more than $300 billion in healthcare payments, according to the Centers for Disease Control and Prevention.

Brookline approved the ordinance in November 2020, with 139 town meeting members voting yes, 78 no, and 11 abstaining. State Attorney General Maura Healy approved the rule last August. And then in December, the new ordinance became international news when New Zealand, which had consulted with Brookline officials about their new tobacco-free ordinance, announced its own proposal, which would start in 2027, to prohibit the sale of tobacco products to anyone born after 2008. The legal age of smoking in New Zealand is 18.

BU Today talked with Silbaugh about why she thinks the new ordinance is a good idea, how it will work in practice, and how it connects with her work to protect adolescents.

BU Today: Why is the ordinance—connecting tobacco sales to birth date instead of age—a good idea?

Katharine Silbaugh: We’ve known since the 1960s that tobacco is unhealthy. And the science hasn’t changed. It’s one of the worst substances out there and it has no beneficial uses. But since the time that we have discovered that tobacco was so dangerous, there’s been a constant push and pull about the fact that there are users of tobacco, and they need to be respected, both because smoking is highly addictive and also because it’s a choice they’ve made. There are existing users. And the tobacco industry has always said, “We’re not trying to get new users.” They’ve been saying that for decades and we keep getting new users anyway, so it can’t be true, right?

Most adult smokers want to quit, but it’s very difficult to quit. This idea says we’re leaving current smokers alone, but that we ought to have a plan to phase it out. And we ought to be able to implement that plan in the slowest and least painful way for industry retailers and smokers. And this threads that needle.

BU Today: Where did this idea come from?

Katharine Silbaugh: There were some other advocates who have been thinking about this for a while. They formed a movement called Tobacco-Free Generation. And in some countries, like in Singapore, they’ve been working to get people under the age of 21 to make a lifetime pledge not to use tobacco, which is great. But that is also an education campaign, not unlike what’s happened in the United States for the last 50 or 60 years. So what Brookline has done that is unique is to be the first place to actually create a birth-date qualification for purchasing tobacco. We’ve put in place something that could actually create a tobacco-free generation.

As a member of town meeting in Brookline, I work on public health issues, sometimes with my neighbor Anthony Ishak. He’s been thinking about this from the public health standpoint for a while, and he came across a Tobacco-Free Generation paper that had been written 20 years ago, but hadn’t led to change, that sort of asked whether this could be done. And so that’s where a nice public health idea meets local government, because it’s ideal to do this kind of thing at the local level. Almost every restriction or regulation on tobacco has begun at the local level. Brookline was one of the first municipalities in the country, in the late 1980s, to ban smoking in restaurants and bars. And we were among the first to remove tobacco from drugstores that were selling medicine. We were among the first to remove flavored tobacco. So we’ve been a leader on experimenting with tobacco regulation.

As has happened with other regulations, the state attorney general has already looked at it and said it was not in conflict with state law [under Massachusetts law those who are 21 and older can legally buy tobacco products]. And that should tell other jurisdictions inside the state that they can adopt it. And then eventually, we hope, the state will adopt it.

BU Today: Are you getting calls from other towns that have expressed interest?

Katharine Silbaugh: So, initially, as a negotiating position, we were going to pick an earlier birthday that would apply to anyone under 40, because there’s literature out there that suggests there’s tremendous benefit to quitting up through age 40. But in the end we chose the birth date of January 1, 2000, because it didn’t impact anyone who was able to purchase tobacco legally at the time we [Brookline town meeting members] adopted the measure in 2020 and because it drew a line between 20th-century and 21st-century prospects for tobacco.

BU Today: Do you have a personal feeling about preventing people from smoking?

Katharine Silbaugh: I have a real feeling about protecting adolescents, including through late adolescence. If we really took seriously the brain science that says that people are not formed as adults until they’re in their mid 20s, if that were a matter that was folded into policy, so many problems would not emerge socially. For example, only a very tiny percentage of people start smoking after their mid 20s or commit crimes after their mid 20s.

BU Today: What’s been the response from the tobacco industry?

Katharine Silbaugh: The New England Convenience Store and Energy Marketers Association and the National Association of Tobacco Outlets (NATO) objected to the bylaw through the adoption process. A group of retailers themselves in Brookline have sued the town. They’re arguing that it violates state law, but Maura Healy, the state attorney general, had already evaluated that question and written a memo explaining why it didn’t [violate state law] before the law went into effect. So we’re not terrifically concerned about that suit. But this idea, if it were to spread, is a real threat to the tobacco industry. I don’t see them laying down arms.

It won’t have a huge impact on the retailers because everyone who’s currently a customer continues to be a customer. It’s just that they can’t bring in new [young] customers. If you were already 21 at the time we passed this, you stay in that customer base. Obviously, they lose the opportunity to build new customers. That’s our goal. We’re trying to create a tobacco-free generation. The retailers have an opportunity to adapt over a long stretch of time and to figure out other things that they can sell.

This is a good idea, and we brought it to life. We’ll see where it goes from here. I’m so heartened by the New Zealand news. But the New Zealand law hasn’t been passed yet.

BU Today: Was it hard to convince people to support this?

Katharine Silbaugh: This was much less difficult to pass than the ban on flavored tobacco. And I’m really not sure why. But I think what I said to Time magazine is true—the genius of it is that it’s kind of a small imposition on individuals and retailers.

I think it’s useful to recognize that the vast majority of people currently using tobacco would like to quit. And so if you were to ask them, do you want young people to start to smoke? I think they’d say no. This ordinance doesn’t blame smokers for being smokers. That’s important. Also, although Brookline is a small jurisdiction, the restriction is still meaningful because we have a lot of college students and graduate students living in Brookline. And there’s a lot of literature out there about the idea that accessibility of substances increases use. So even if we never got beyond Brookline, this is something that would have an impact.

There are 5 comments on Can Brookline’s New Anti-Smoking Law Create a Tobacco-Free Generation?