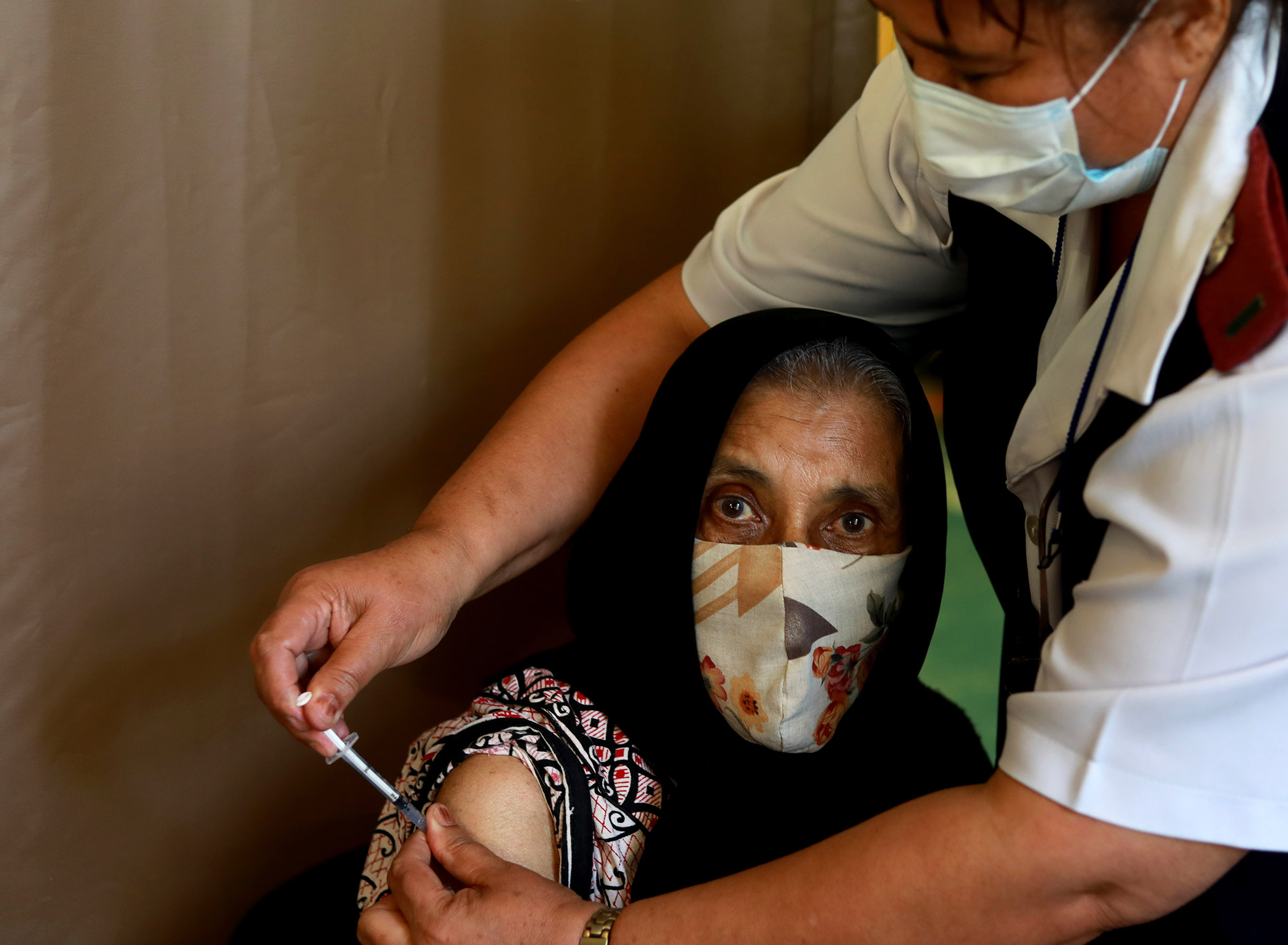 A 76-year-old woman receives her first dose of the Pfizer COVID-19 vaccine at a vaccination centre in Cape Town, South Africa, on May 26, 2021. (AP Photo/Nardus Engelbrecht)

As the United States flounders to meet its coronavirus vaccine targets—only 49 percent of Americans are fully vaccinated to date—the especially contagious Delta variant has the daily number of new cases back on the upswing, with a 171 percent increase in new cases compared to two weeks ago. Around the world, the situation is even more dire. Despite the fact that experts predict nearly 11 billion doses of vaccine will have been manufactured by the end of 2021, vaccines are not accessible by the vast majority of people who live outside the world’s highest-income countries.

On Wednesday, Boston University’s Center for Emerging Infectious Diseases Policy & Research (CEID) convened a panel of experts to provide a briefing on the pitfalls that have so far prevented coronavirus vaccines from reaching the world’s most vulnerable populations, and what challenges lie ahead in pursuit of the goal for 40 percent of the world population to receive a COVID vaccine by the end of 2021. That goal, and a longer-range one of having 60 percent of the world vaccinated by mid-2022, was proposed earlier this year at the G20 Global Health Summit by Kristalina Georgieva, managing director of the International Monetary Fund (IMF).

US Congresswoman Lois Frankel (D-Fla.), kicked off the panel with opening remarks, saying, “the pandemic has taught us how truly connected we are on this planet.” Given that the coronavirus has shown no regard whatsoever for state or national borders, and due to the influence that globalization has had on spreading COVID-19 across all seven continents, Frankel (CAS’70) said “we have a lot of work to do in preventing and responding to [future] pandemics” like this one.

In the briefing—moderated by Amy Maxmen, senior reporter for Nature—global health experts Nahid Bhadelia, founding director of BU’s CEID, Josh Michaud, associate director of global health policy at the Kaiser Family Foundation, and Mosoka Fallah, president and CEO of Refuge Place International, discussed ways that US policymakers can help ensure people around the world have equitable access to coronavirus vaccine—a strategy that will also protect the health of Americans. With Delta driving coronavirus cases toward another US-wide spike, and many Americans still hesitating to get vaccinated, Maxmen said, “it’s like watching a slow-moving train wreck, despite having developed the scientific tools to stop it.”

Here are the top six takeaways from the panel discussion:

Bhadelia said that 115,000 healthcare workers have died from coronavirus globally, which is “a big deal in [areas of the world] where there are only one or two doctors” caring for people spread across large, rural geographic regions. She added that the stressors of the pandemic have also pushed 95 million more people into extreme poverty, and brought 130 million people to the brink of starvation, due to economic and food scarcity.

What’s more, she said, research from the IMF reveals that the wealth gap between the world’s richest and poorest will become more extreme following a pandemic. The more time that lapses between when high-income countries become largely vaccinated and when vaccines reach the lowest-income countries, the greater income inequality will increase. In turn, this dynamic can breed political instability.

The US has been so focused on dealing with its own surges—which are now on the rise again—that Bhadelia said we haven’t properly turned our eyes to “how bad things are globally, and how bad they’re going to be for a while.”

The magnitude of the pandemic, she said, is becoming more and more exacerbated by many of the world’s most vulnerable populations slipping further and further into poverty. As if the current pandemic weren’t problematic enough, Bhadelia said extreme poverty further breaks down the boundaries between humans and animals, and provides even more opportunity for pathogens like SARS-CoV-2 to jump between species and develop as new emerging infectious diseases.

“At the current pace, disparities will grow…low-income countries will not reach the global vaccination target of being 40 percent vaccinated by the end of 2021,” Michaud said. To do that, “they would need to increase their daily vaccination rate by 19 times,” starting immediately.

G7 countries have committed to donating 1 billion doses of COVID vaccines to low-income areas by mid-2022. But as promising as that sounds, only 100 million such doses have been delivered globally to date.

Fallah said that lack of access to vaccines has created mass fatality situations in many countries in Africa, saying, “83 percent of new deaths are from COVID-19 in Namibia, South Africa, Tunisia, Uganda, and Zambia.”

That’s largely due, in part, to the fact that, in addition to not having vaccines, these countries lack the infrastructure to manufacture enough supplemental oxygen for their COVID-19 patients. In Uganda, existing infrastructure can handle producing 3,000 cylinders of oxygen per day. Right now, the number of COVID-19 patients in Uganda requires 25,000 cylinders per day.

“Africa is running out of oxygen,” Fallah said.

Countries like Uganda that don’t have the capacity to manufacture oxygen, life-saving drugs, or other tools to improve survival from COVID-19 infection, are where surplus vaccines are most badly needed to be delivered. But that’s not what is happening.

“Political will”—or lack of it—is preventing surplus vaccines, like the many doses stockpiled here in the US, from being donated and delivered to low-income countries

Why is that? Bhadelia said it has to do with the way the agreements were set up between the Trump administration’s Operation Warp Speed and vaccine manufacturers. “There’s a limit on exports,” she said. “It’s a ‘political will’ issue.”

“Where there’s a will, there’s a way,” Michaud agreed, although he said he does not know all the details of the legal agreements made by Operation Warp Speed. “AstraZeneca vaccines have been able to be donated…. If there was enough push on this, these doses of [Moderna, Pfizer, and Johnson & Johnson vaccines] that have been distributed around the country [could be delivered to other countries that need them desperately and want to use them now]. There could be logistical issues of getting them there, but these are solvable issues.”

It’s an extremely frustrating conundrum for Bhadelia to see. “This is not business as usual, [where we can afford to] wait until we figure out the legalities,” she said. During the recent coronavirus surge in India, she lost three members of her extended family. Meanwhile, despite how flush the US is with vaccine supplies, she has been navigating challenging conversations with some her patients at Boston Medical Center who are hesitant or opposed to getting the life-saving vaccine.

Bhadelia said that if booster vaccines are needed in the near term, it will most likely only be recommended for a smaller portion of the US population—namely, people aged 65 or older, immunocompromised people, or those who didn’t receive a high level of protection from their initial vaccination. “It makes sense to reserve boosters for a small portion of the population, but distributing [surplus] vaccines more widely—quickly—is how we will keep the US safe.”

That’s because with the Delta variant spreading as fast as it is throughout the world, the virus is getting countless more opportunities to mutate. Every time the virus transmits from one person to another, it changes slightly. With enough new changes and combinations, increasingly contagious and potentially deadly versions of coronavirus could emerge.

There is 1 comment on Why Global COVID Vaccinations Are Dangerously Lagging: Six Things To Know

Why Global COVID Vaccinations Are Dangerously Lagging: Six Things To Know
1
share this