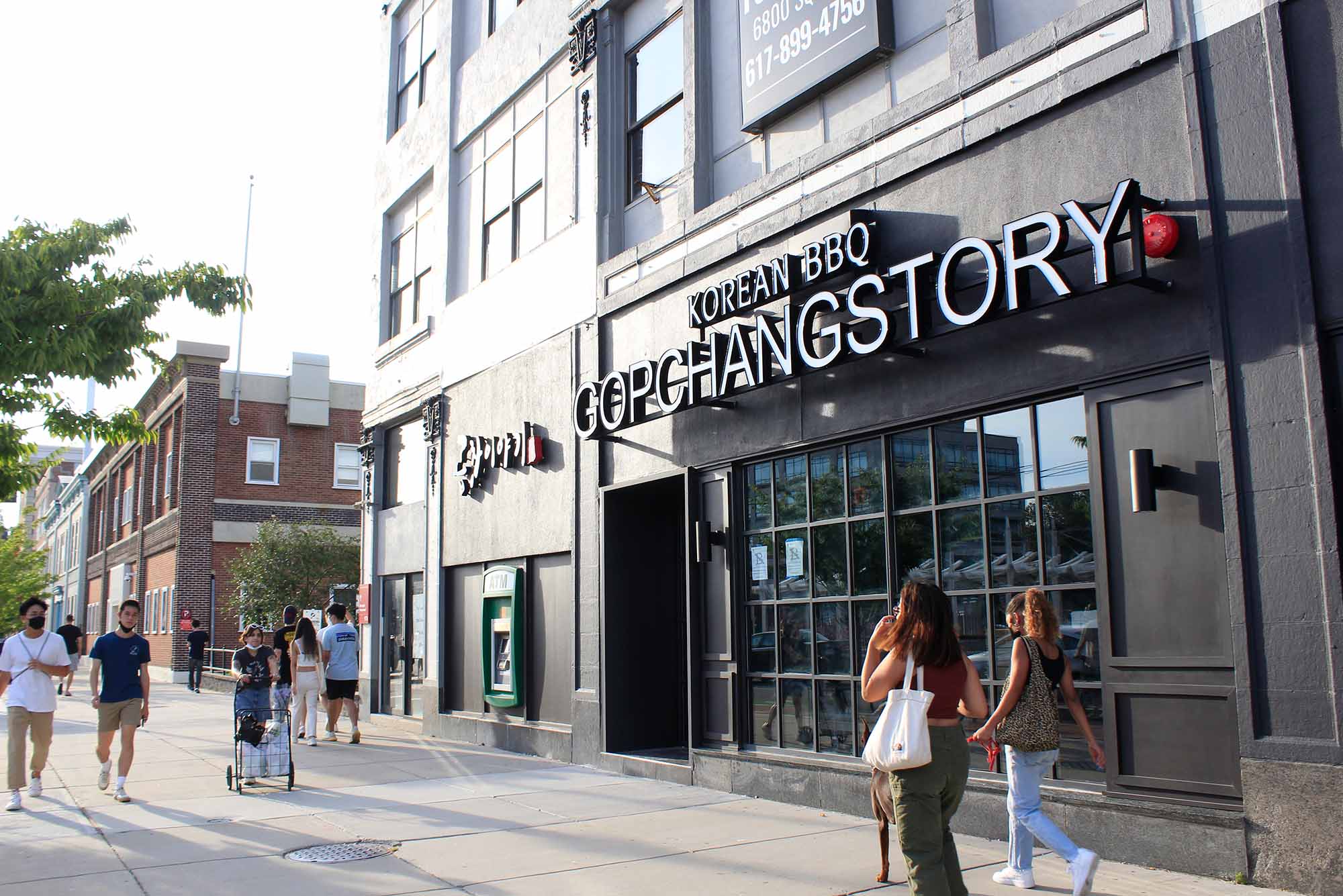 Gopchang Story Korean BBQ restaurant has taken over the space that was formerly T’s Pub. Photo by Lauren Richards

Commonwealth Avenue has undergone a series of transformations since spring 2019. Before the pandemic, Boston University’s main thoroughfare was bustling with students heading to and from class, restaurants buzzing with customers, and stores filled with shoppers. That all changed when the coronavirus pandemic hit in March 2020, forcing people to stay home. With very little foot traffic, many businesses soon had trouble paying the rent. The area has since rebounded, thanks to students and staff returning to BU’s campus (although now donning masks and keeping their distance).

We bring you a guide to navigating the new spots on Comm Ave, as well as learning what closed and what’s opening in the area.

The Buckminster Hotel temporarily closed because of COVID in March 2020, and later announced its permanent closure in April 2020. The building initially opened in 1897 as a luxury hotel and eventually became known for its jazz club, Storyville, which hosted names like Ella Fitzgerald and Louis Armstrong. Over the years, its ownership repeatedly changed, as did its functions. It went from a high-end hotel to a rooming house to a dormitory to a budget hotel, and eventually, to a closed landmark. There have been no updates on what will replace the historic hotel. The Buckminster’s restaurant, Fenmore Grill, also closed. It opened in 2013 and was known for its burgers and beers.

UBurger announced the permanent closure of its original Kenmore Square location in August on its Facebook page, attributing the decision to the “challenging last few years.” The better-than-average fast food shop, known for its burgers, shakes, and fries, first opened its doors 15 years ago in Kenmore Square. A second location in BU’s West Campus later followed, but eventually closed in 2018 because of increasing rent.

Rent disputes closed the doors of sister restaurants Eastern Standard, Island Creek Oyster Bar, and the Hawthorne. Eastern Standard was a staple in the neighborhood since opening in 2005 and represented a transformation of the Kenmore neighborhood. Island Creek opened five years later, offering high-end seafood. Following those two eateries, the Hawthorne established itself as a neighborhood cocktail bar in 2011. Now, a New York–based company, Blue Ribbon Restaurant Group, will fill the vacancies with new restaurants that will likely feature a brasserie, and seafood, and sushi, according to a recent Boston Globe article.

Shu DaXia Hot Pot is set to be the first American location of the Chinese-owned chain, which currently has spots open in China, Malaysia, Australia, and Japan. The Sichuan franchise is known for its extensive options of meats and sauces. The restaurant, which has yet to announce an opening date, replaces Scoozi, an upscale Italian restaurant that had been there for 19 years.

The central campus CVS closed in December 2020. BU Real Estate owns the property, but is still in the planning process of what to do with the space.

Palm Beach Tan closed during the 2020–2021 school year and the space is now vacant—and like 730 Commonwealth Ave., there is no definite word on what is coming in next.

The Boston branch of Vibram opened early this summer, but closed its doors temporarily in early August with the surge of positive COVID cases. The store, known for its unique sporting and fitness footwear, remains closed until further notice.

Blue State Coffee, a regional cafe known as a cozy spot for students to study and for donating a portion of its income to local nonprofits, closed in September 2020. The space currently sits vacant, but El Jefe’s Taqueria—a casual Mexican restaurant with a unique breakfast menu in addition to its tacos, burritos, and burrito bowls—will open its fourth Boston location in the space. As of now, the plan is to open at the end of the year.

Gopchang Story took over the space that was formerly T’s Pub. T’s Pub was a go-to for BU students looking to get a drink, grab a burger, or watch a game. The bar also hosted trivia and theme nights before officially closing its doors. Gopchang Story moved in earlier this year, making it the franchise’s third location, the other two being in Manhattan and Flushing, N.Y. Their website doesn’t have a date for their grand opening, but their Facebook page announces that it will be soon.

The Ring Boxing Club shuttered in 2020 when former Boston Mayor Martin Walsh mandated that gyms close. The club then began hosting outdoor classes throughout the summer, but eventually left the Comm Ave space for good, moving tothe W Hotel in Boston’s Theater District, where it offered both private and group training. The club appears to have now closed and the space is currently for rent.

Fiya Chicken, a Korean fried chicken joint, took over the space once home to noodle spot Love Art Udon, which had a short stay on Comm Ave, lasting from November 2018 to July 2020. Fiya Chicken opened its doors last December and has since been serving Korean-style twice-fried chicken, along with its signature sauces (soy garlic, spicy garlic, fire sauce, and apple cider honey mustard). On offer are a variety of dishes that showcase the chicken, including sandwiches, wings, tenders, rice plates, and even Korean-style corn dogs.

There are 8 comments on What’s Closed, What’s New, and What’s Opening Soon along Comm Ave