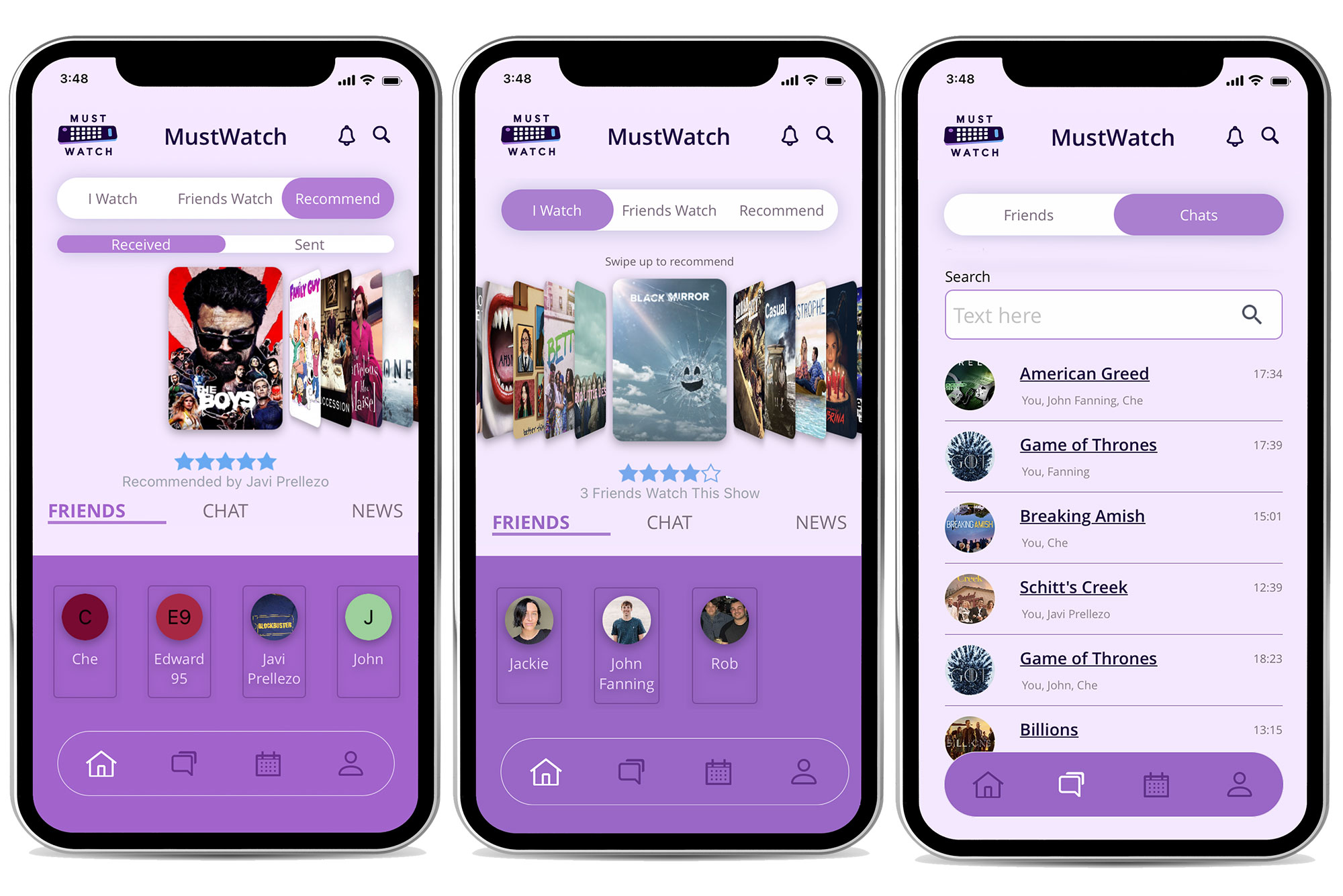 The app’s different features let you see what your friends are watching, rate the shows you watch, send recommendations to one another, and start chats about shared shows.

Unsure What to Stream Next? This App Just Made It Easier

Questrom alums’ MustWatch lets friends recommend shows to one another

We’re willing to bet you’ve been spending more time than ever on streaming services. Between COVID-19 lockdowns and the recent spate of winter storms, it seems like everyone’s turned to ordering takeout and queueing up another episode of Lovecraft Country or WandaVision.

But then the great conundrum: what to watch next. If you’ve ever given up on a show halfway through the pilot, you know that not all series are created equal—with thousands of shows at our fingertips, it can be difficult to cut through the noise of what’s worth watching and what simply exists.

That’s where MustWatch comes in. The new app, created by two Questorm alums, wants to take the guesswork out of streaming. It pulls series from all the major platforms—HBO, Netflix, DisneyPlus, and more—to let you see what your friends are watching, rate the shows you watch, send recommendations to one another, and chat about what’s in your streaming queue. “Spend more time watching, and less time scrolling,” the website reads.

“This was one of the few good things to come out of the pandemic,” says MustWatch cofounder and COO Aimee Carvalho. “With the amount of people suddenly spending more time at home and in front of their TVs, we kept hearing from people who were saying, ‘Oh, I actually need this. I need this right now!’”

The app was several years in the making. The idea grew out of a conversation at Edouard’s graduation party in 2014—where a friend expressed frustration that he couldn’t find anyone to talk about Game of Thrones with. Going from concept to app proved laborious, Edouard says. Early on, he enlisted friend and classmate Carvalho to help with user design. Together they spent the next few years growing the team, forming an LLC, and building out the app in between their full-time gigs working in finance and consulting. MustWatch officially launched for Apple and Android in mid December.

With the amount of people suddenly spending more time at home and in front of their TVs, we kept hearing from people who were saying, ‘Oh, I actually need this. I need this right now!’

Flip through the “Friends Watch” page (when you sign up, you’re automatically friends with Carvalho, Edouard, and the rest of the team) and every TV genre pops up, along with the watcher: there’s South Park (Edouard), Insecure (Carvalho), Chernobyl (CFO Rob Maiello), and Love Is Blind (also Maiello). “It’s very organic; you don’t have to guess who’s watching what,” Edouard says. To recommend a show you’re watching and want others to check out, you just swipe up and choose a friend to send your rec to. It’s similarly easy to start a chat—you pick a series, select friends, and start talking.

“My parents started using the app, and have been talking to their friends on it,” Edouard says. “Seeing all the connections that have been made because of it has been really nice.”

Eventually, the cofounders hope to bring in advertising money by partnering with streaming platforms to promote particular series. Currently, they’re working on spreading the word—“the app grows in value the more people you add to it,” Carvalho says—and on building out MustWatch’s news and calendar features, so users know when a show’s new season premieres or if a show gets canceled.

“Every accomplishment comes with a new task list,” she says. “You complete one step, and then you move onto the second step, where you have a whole new set of priorities.”

“As of right now, we have almost 500 users,” Edouard says. “We’re definitely happy with the growth since last year; it’s great to look back and say, wow, we’ve accomplished a lot. But there’s always more to do—we want to get more users, we need to do this, we need to do that. Our mindset is yes, celebrate the wins, but also, you can’t get lost—you still have to keep growing.”

Unsure What to Stream Next? This App Just Made It Easier

Unsure What to Stream Next? This App Just Made It Easier
0
share this