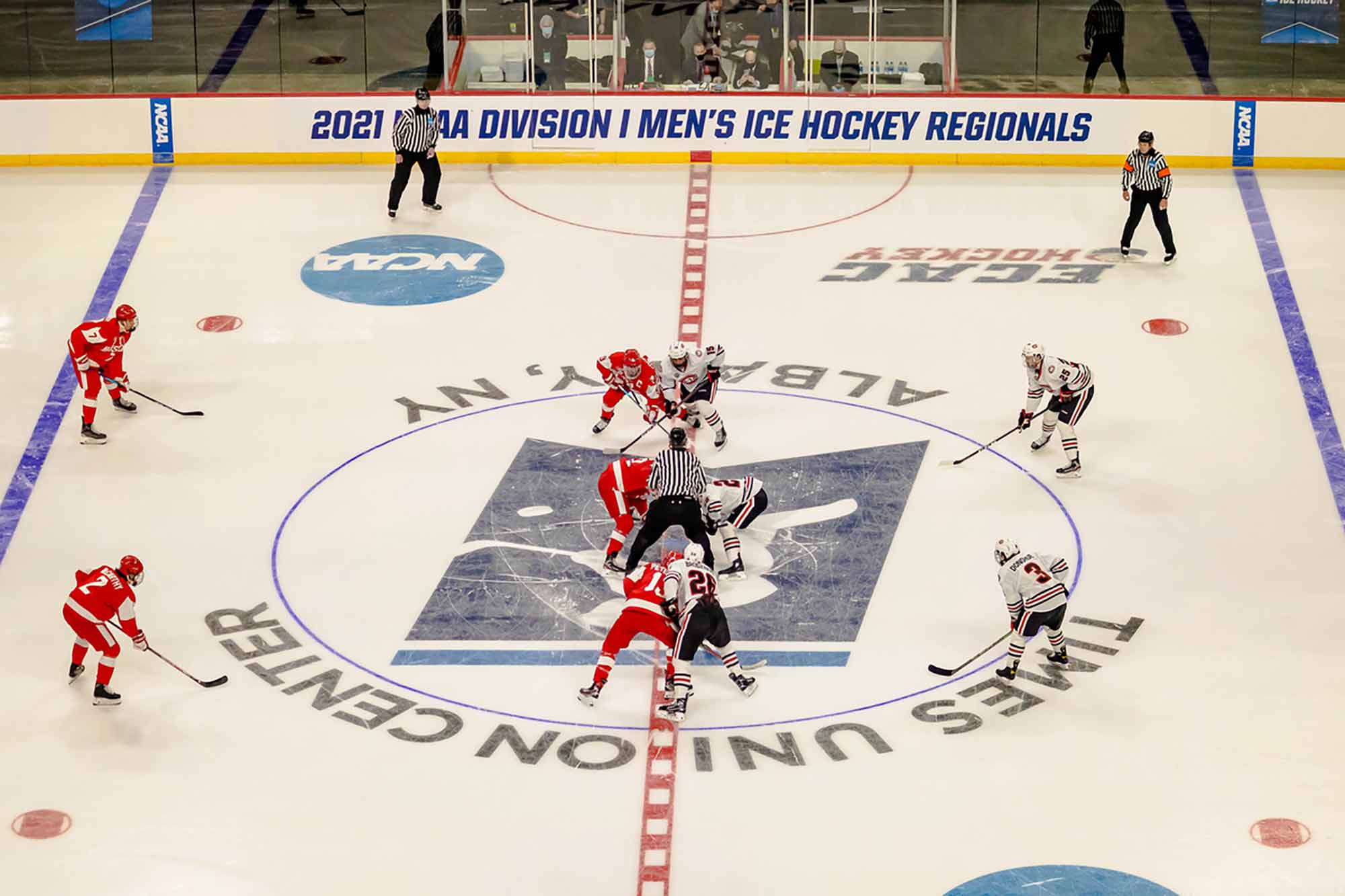 The Terriers faced off against St. Cloud State for just the second time ever on Saturday. Their previous meeting was in 2000, also in Albany, when BU beat the Huskies 5-3. Photo by Carolyn Mooney

Appearing in its first NCAA Tournament since 2018, the BU men’s hockey team was knocked out by St. Cloud State University 6-2 at Albany’s Times Union Center on Saturday afternoon.

“The loss will sting for a bit,” head coach Albie O’Connell said at the press conference after the game, “but I’m proud of the way we battled through all the adversity.”

The Terriers scored the game’s first goal, but surrendered the next two before battling back to tie it 2-2. St. Cloud State took control from there, finishing the game with four unanswered goals.

The Terriers were picked for the tournament field after finishing the 2020-2021 Hockey East campaign with a 10-4-1 record. The 15 games they played were the fewest of all the 16 programs in contention, and captain Logan Cockerill (SHA’21) said the team tried to make the most of every opportunity. “Obviously we wanted to play more hockey. It sucks to go out that way, but it is what it is.”

“I think we were nervous off the hop, and the penalty kill settled us in a bit,” he noted.

BU broke through just eight seconds into the second period, as Wilmer Skoog (COM’23) followed up a net rush by Cockerill. The lead lasted for 12 minutes, until St. Cloud State tied the game by depositing a puck that elevated over the BU cage and onto a Husky stick. Goaltender Drew Commesso (CAS’24) stopped 32 shots in his tournament debut, but couldn’t do anything about that one.

“I don’t think any goalie in the world would’ve saved that one, with the puck flipping up over the net like that,” O’Connell said.

SCSU went ahead 1:15 later, finding the back of the net on a shot that deflected off of two Terriers in front.

Jake Wise (COM’22) pulled BU level with less than five minutes to play in the middle frame, picking the top corner on the power play for his first goal of the season. The Huskies responded immediately, forcing a turnover and netting the eventual game-winner just 30 seconds later.

BU had a five-minute power-play opportunity early in the third period, but a shorthanded breakaway resulted in a St. Cloud State penalty shot. The Huskies converted, earning crucial insurance before adding a pair of late goals to seal the win.

O’Connell says the penalty shot changed the game. “That was the turning point of the game, 100 percent.”

They had some lucky bounces, but that’s just what happens in games like this,” Cockerill said at the after-game press conference.

With the season now over, and Cockerill nearing graduation, he expressed appreciation and respect for his teammates: “It’s a great group. I love these guys.”

Looking ahead, O’Connell says his team is trending the right way. “The nice thing for us is, it’s a step in the right direction. We really look forward to the future.”