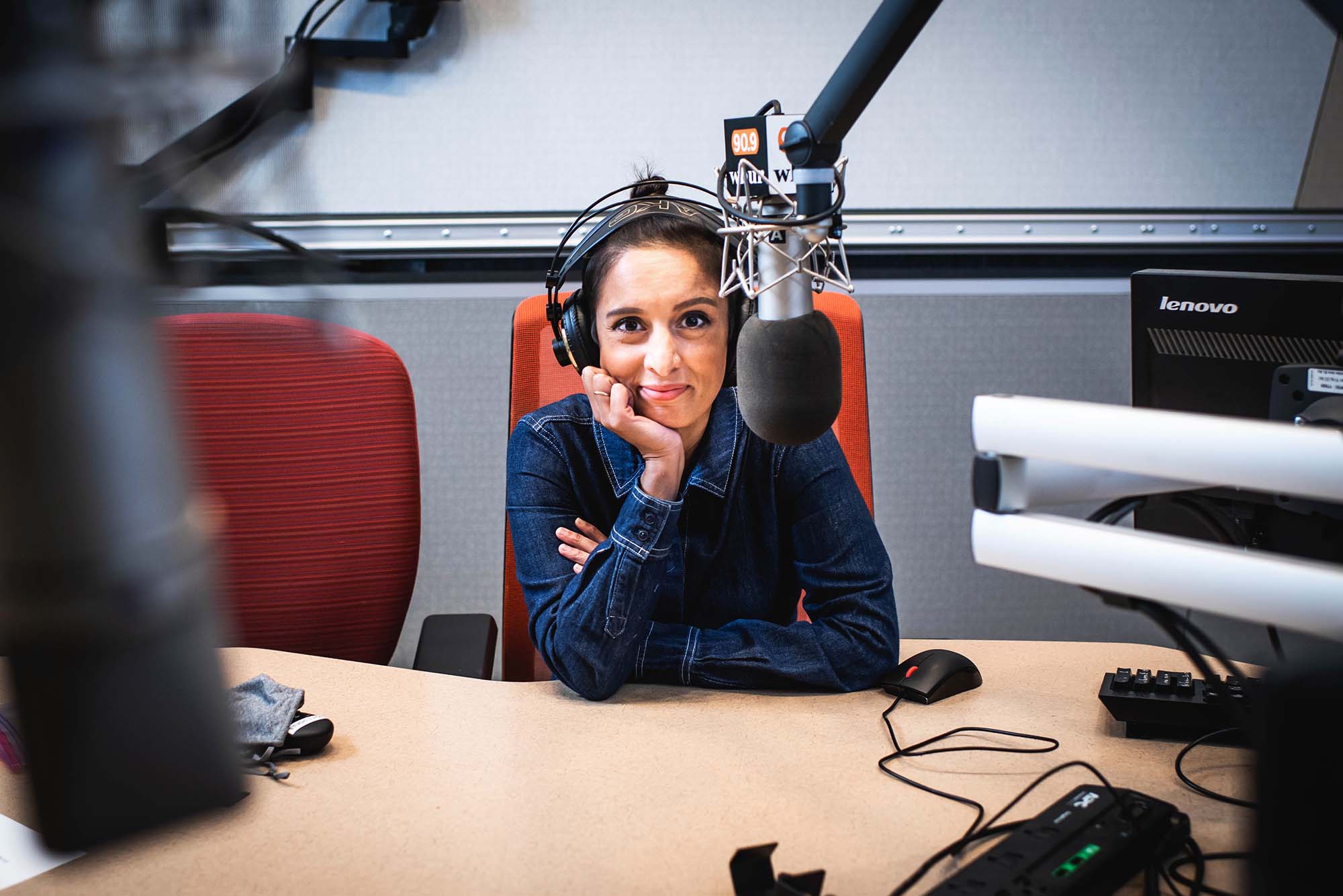 Rupa Shenoy took the mike as host of WBUR’s Morning Edition October 11, after previously reporting all over the globe for her award-winning radio series, 400 Years, broadcast on GBH’s The World. Photo by Jackie Ricciardi

New WBUR Host Rupa Shenoy Downsizes Her Beat, from across the Globe to Boston

For the first time since President Bush sat in the Oval Office—the first President Bush—early-riser listeners of WBUR’s Morning Edition will awaken to a new voice. Rupa Shenoy has assumed the host’s chair for the flagship show of BU’s National Public Radio station.

Shenoy was introduced on air yesterday by the man she replaces, Bob Oakes, who is returning to reporting for the station after 29 years as host. It’s a downsizing of beats for Shenoy, who looks forward to covering Bostonians after roaming The World as human rights reporter for that show on Beantown’s GBH radio.

“She is a first-class journalist and storyteller, with a wonderful on-air presence,” WBUR CEO Margaret Low says. “It is the beginning of an exciting new chapter for WBUR and for our devoted listeners.” Low adds that Oakes’ new reporting assignment is “a well-deserved victory lap” after “his essential part [in] greater Boston mornings for nearly three decades.”

Iowa-born of Indian parents, Shenoy has worked in broadcast (Minnesota Public Radio before GBH) and print (magazine, newspaper, and Associated Press stints in Illinois). She won a 2020 Kaleidoscope Award, which honors diversity, equity, and inclusion broadcasting, for 400 Years, a yearlong series she reported on the history of slavery in the Americas. She also created and hosts Otherhood, a podcast about Americans dealing with their identities on the cusp of the nation’s shift to majority-multicultural.

BU Today caught up with Shenoy as she was returning to Boston from Washington, D.C., where she temporarily moved during COVID-19 to be close to family. (“Someone used the verb pandemic-ing,” she says.)

BU Today: What time will you have to rise and shine to get ready as Morning Edition host?

Shenoy: I want to be there at 4 am, so probably the rise and shine moment will be something like 3:30. I [practiced] it gradually, so 5 to 10 minutes every day, slowly moving my wakening [time] earlier and earlier.

BU Today: You have an important beat at The World. What made you interested in giving that up for Morning Edition?

Shenoy: It’s a new skill for me and new role. In every step of my career, I’ve wanted to grow and try something new. The bigger [reason] is being with a community and getting to know a community really well. I want to get back to that level. I covered a small town as a newspaper reporter, and to a certain extent, I feel like that’s the best journalism for me. And just having that relationship with the community is very appealing to me.

What really drew me to WBUR is the environment they’re trying to grow. Last year, after George Floyd, there was a lot of unrest in newsrooms, difficult situations for journalists of color. A lot of journalists of color are looking for the right environment now, and that’s what I was doing. I hope to help the place that is on the way toward doing it better.

BU Today: Where have you reported from for The World?

Shenoy: In 2019, I did [400 Years], about the beginnings of slavery in the English colonies. I went to Virginia—the place that they were originally brought—and then Ghana, saw the slave castles that they came from and talked to the people there, always relating today to the start of slavery. I also went to Brazil, understanding the different ways that slavery unfortunately developed in different places. It really teaches you a lot.

I went to California and Chicago and places like that for Otherhood. I did a lot of [reporting in] Canada, especially around the Trump administration activity with refugees and closing of borders. I was in Atlanta during the midterm elections, which turned out to be a really crucial time. I followed the international monitors around. In retrospect, it really pointed to what came next [in 2020].

BU Today: How disconcerting was it covering a US election that required monitors?

Shenoy: I don’t think any reporters were surprised at that point. I mean, the reporters were reading and reporting about the concerns about election interference and voting rights. It wasn’t surprising for me at all.

BU Today: Bob Oakes has been a fixture in Boston. What do you hope to bring to the host’s role?

Shenoy: We’re very, very different, and comparisons won’t tell us a lot. I’m 42, so I’m not so young, but it’s a younger voice. I am a hard-news reporter, and I’ll bring that, as well. I’ve also done podcasts, and I have a different kind of narration, a different way of speaking more casually to an audience.

Bob did reporter packages, and he wants to do more now. I think we’re going to build that in from the beginning: more reporter packages, more interviews. I don’t want to limit possibilities, but what I’m primarily interested in are Bostonians. I came to Boston a year before [the late Mayor Tom] Menino [Hon.’01] died, and I’m very glad about that, because knowing how people felt about Menino and his impact on Boston history really adds a lot to my knowledge of the place.

BU Today: CitySpace at the Lavine Broadcast Center has reopened this fall after pandemic-related restrictions eased. Is that a space Morning Edition will be making use of?

Shenoy: I don’t know the specific plans, but in general, I am looking forward to doing live events and getting out and getting to know people, being someone that they don’t just know from the radio.

New WBUR Host Rupa Shenoy Downsizes Her Beat, from across the Globe to Boston

New WBUR Host Rupa Shenoy Downsizes Her Beat, from across the Globe to Boston
0
share this