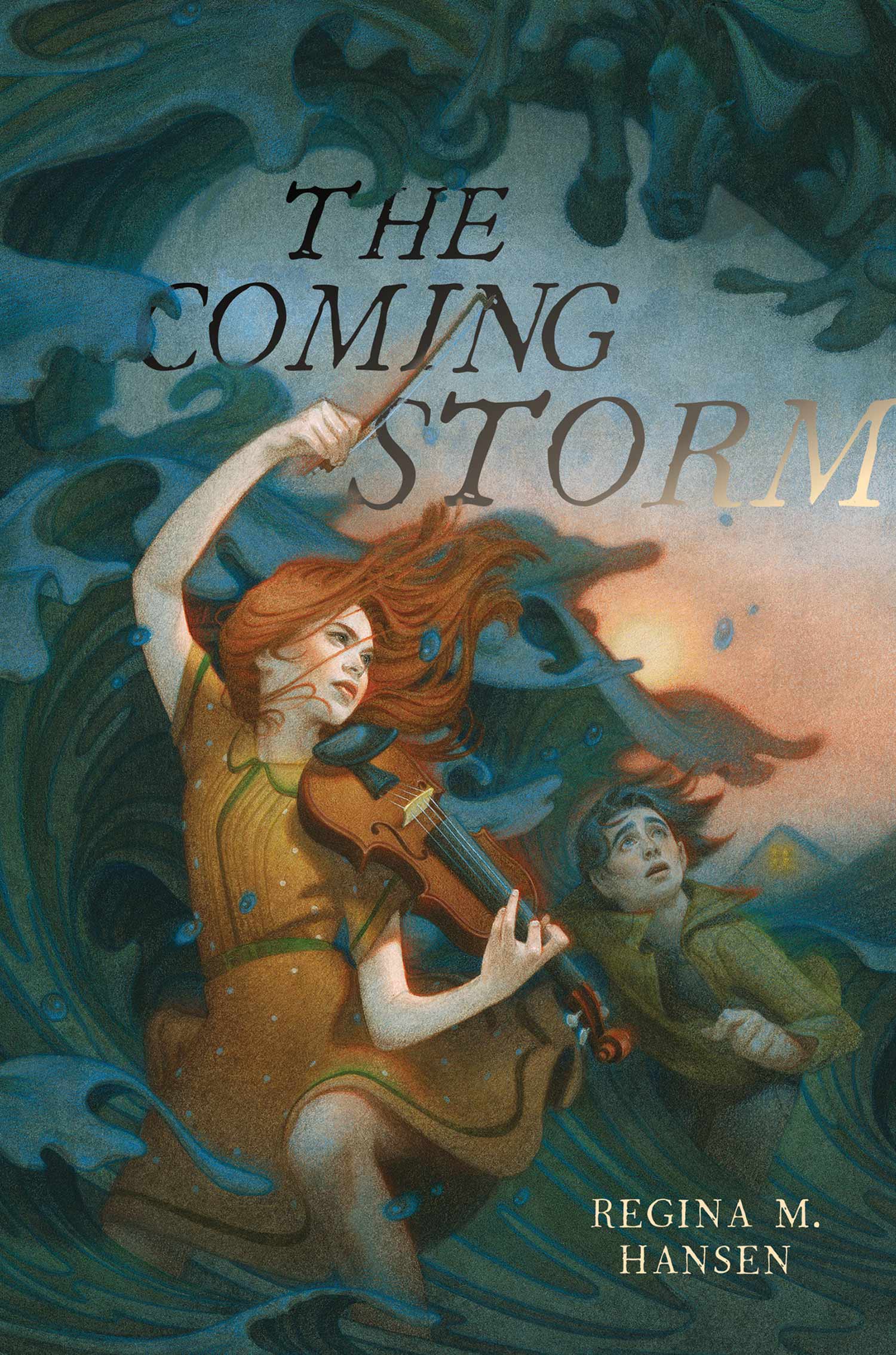 Regina Hansen’s first novel, The Coming Storm, written for YA readers, is set in Canada’s Prince Edward Island, where the author spent summers as a child. She’ll be at Porter Square Books in Cambridge for a virtual book launch on Tuesday, June 1, at 7 pm.

The Story behind Regina Hansen’s YA Novel The Coming Storm

CGS master lecturer draws on love of the supernatural for inspiration

As a child, Regina Hansen spent summers with her grandparents on Prince Edward Island. The Canadian province proved to be a magical place for her, full of natural beauty, with days spent hunting for wild blueberries and digging for clams. It was also a place famed for its storytelling. Hansen, a College of General Studies master lecturer in rhetoric, grew up hearing stories of ghosts, the devil, and phantom ships (her grandfather once saw the Phantom Ship of the Northumberland Strait, also called the Burning Ship).

Hearing about those experiences instilled in her a love of the supernatural (her composition and rhetoric classes often focus on the fantastic and on popular culture). She’s also the author of Supernatural, Humanity, and the Soul: The Highway to Hell and Back (Palgrave MacMillan Publishing, 2015).

Hansen draws on her childhood experiences for her first novel, The Coming Storm (Atheneum, 2021), a book for young adult readers. Set in her beloved PEI and drawing on Scottish folklore, mythology, and island history, the novel is the story of 15-year-old Beet MacNeill, a smart, brave young woman and talented musician. When her older cousin dies, Beet finds herself—and those she loves—threatened by an old evil that she only gradually begins to understand, and that she will ultimately have to thwart.

The novel has all the elements of a great YA story: friendship, danger, betrayal, loss, and yes, a budding romance. Kirkus Reviews calls the book “a thoroughly enjoyable and suspenseful tale,” noting that “readers will be drawn in by the haunting atmosphere.”

BU Today spoke with Hansen in advance of a virtual book reading she is giving Tuesday, June 1, sponsored by Porter Square Books. The event, which will include a conversation with Hansen moderated by Theodora Goss, a College of Arts & Sciences Writing Program master lecturer, is free and open to the public. (Find details below.)

BU Today: How did the idea for the novel come about?

Regina Hansen: I was inspired by the Island—its natural beauty, but also the funny and sometimes spooky stories I would hear from my relatives. I also heard them from other kids, usually at swimming lessons. On top of that, I’ve had a lifelong interest in folklore and am most drawn to stories that have been passed down by real people—ghost stories especially.

BU Today: The story is full of supernatural doings. How did you become interested in the subject?

Regina Hansen: I have a feeling an interest in the supernatural is innate, because whenever there were supernatural stories available, I was attracted to them. I used to hide behind the couch, listening to/peeking at Night Gallery and other horror anthology shows that were popular when I was a kid. Someone had a stack of Tales from the Crypt comics, and I read them all. The first book I got from the Scholastic Book Club was called The Ghostly Hand and Other Haunting Stories, then later I took my brother’s copy of Bernhardt J. Hurwood’s Vampires, Werewolves and Other Demons. Even as a really little kid, I remember loving Robert Bright’s Georgie, about a little ghost who lived in a New England town. There was literally no time when I was not attracted to the supernatural. Some children outgrow it, but not me. It also probably helps that I’m religious—Catholic.

BU Today: Talk to me about Beet McNeill.

Regina Hansen: Beet is pretty flinty. She loves her family and friends, but they amuse and irritate her in equal measure. She has experienced sorrow and—I don’t want to call her poor, because I think people who grow up like Beet would not like to be called poor—but there are no extras in her house, and she has many responsibilities and few expectations. She doesn’t suffer fools gladly. She is not an entitled person and distrusts any who she believes to be entitled. She isn’t always right about who those people are. She is brave. Aside from the people she loves, music is the most important thing to her.

BU Today: You set the novel in 1949 and 1950, with flashbacks to the early 19th century. Why did you decide to set the story in the past, rather than the present?

Regina Hansen: Because so much of the folklore is based on stories from my father, uncle, and older cousins, I wanted to set it when they were children and teenagers. I also thought it was important to set it when TV wasn’t really a thing, so that live music would be the most important entertainment. And these people have just come off World War II, which affected Canada significantly, so they are used to hardship. Maybe most importantly, that was the era when my grandparents still had their farm. They had to leave it when my father was eight or nine, but at least a couple of times each summer, my grandfather would drive us out to look at the land and the old house. It took me a long time to understand how much he missed it, that this was more than just a Sunday drive. I wanted this story to be a way of giving the farm back to him, symbolically, I guess. It lives forever now, kind of, and so do my grandparents, to whom this novel is dedicated.

BU Today: The Coming Storm is your first novel. What were the biggest challenges and surprises you encountered writing it?

Regina Hansen: The first challenge is always finding the time to write while also teaching and raising children. As far as the book itself, I found it challenging to pace it correctly, to reveal the mystery slowly, especially since it jumps around in time quite a bit. It was also important to me to honor the real place and people, to get the details right. The best surprises were every time I thought I was stuck and then a new idea would seem to come to me out of the blue—or “out of the blue” after three hours of sitting there, scribbling nonsense.

BU Today: Why did you want to write for a YA audience?

Regina Hansen: I like kids that age. I didn’t alway like being that age, but when I did like it, it had a lot to do with stories—reading them, writing them, going to the movies, watching TV. I chose my own friends during that period, the ones who knew and understood me, and are still my friends today. At that age, it is possible to be both skeptical and filled with wonder, and you’re also gaining freedom and responsibility, which can be both thrilling and frightening for different reasons. In my reading life, I always try to replicate that feeling of being 12, 13, 14 and it’s summer or maybe a holiday. Nobody needs you for anything, and you can just read and imagine a different world. It’s magical. That’s not every child’s experience, of course, but I would love it if even one young person could have that experience reading this book, especially if their life is hard, as Beet’s often is.

BU Today: Beet, her best friend, Jeannine, and her other friends are also so indelible. I kept imagining more adventures in store for them. Are there any plans for more novels featuring them?

Regina Hansen: I have an idea and have even written a few chapters (for another book). It will depend on how readers respond to The Coming Storm. I have also completed a novel set in Montreal and am working on one set in Massachusetts, so I’m trying to honor all my “hometowns.”

Regina Hansen will read from her new YA novel The Coming Storm and talk about the book in a conversation with Theodora Goss (GRS’98,’12), a College of Arts & Sciences Writing Program master lecturer, Tuesday, June 1, at 7 pm. The virtual event is free and open to the public. Signed copies of Hansen’s book will be available for purchase. Register here for the event on Crowdcast.

The Story behind Regina Hansen’s YA Novel The Coming Storm