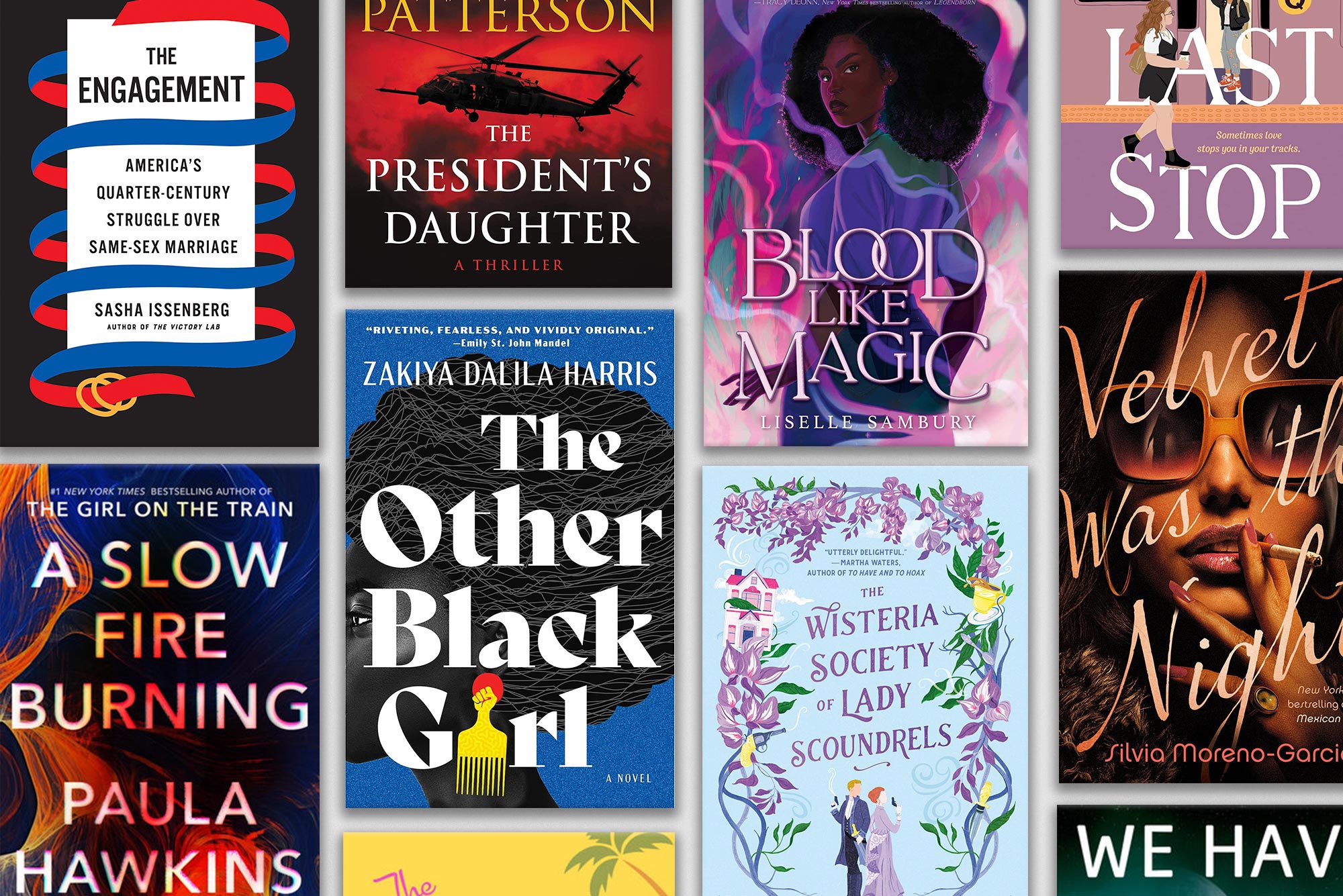 Putting Together Your Summer Reading List? Check Out Our Recommendations

Whether on the beach or in the backyard, these 15 summer releases will have you turning the page

Ah, Memorial Day, the unofficial start of summer, a time for indulging in a good page-turner. Whether you love fiction, nonfiction, mystery, or romance (or all four), you’ll find something to enjoy on our list of some of the most talked-about books coming out this summer. So, heading to the beach or just the backyard, check out our 15 exciting new genre-spanning books to look out for. (We’ve organized them by publication date.)

Former sitcom star Patrick is known by his niece and nephew, Maisie and Grant, as “Gay Uncle Patrick” (GUP for short). He loves spending time with them when they come to visit. But Patrick’s bachelor lifestyle comes to an abrupt halt when Maisie and Grant’s mother passes away and their father (Patrick’s brother) has a health crisis. Patrick must take on the role of primary guardian of his young niece and nephew. Despite having made up his own “Guncle Rules,” Patrick has to quickly learn the ups, downs, and rewards of parenthood.

In this insightful reexamination of the Watergate scandal that ended the presidency of Richard Nixon, former Washington Post reporter Michael Dobbs draws on thousands of hours of newly released tapes to create a riveting portrait of power, political backstabbing, and ambition. As paranoia grows in Washington, D.C., the Watergate burglars and their handlers turn on one another. At the center of it all is Nixon, a president in crisis. Dobbs’ book reads like a Greek tragedy.

Reporter and podcaster Ashley Ford shares the story of her relationship with her incarcerated father. Growing up, she admired her father, despite having spent little time with him in person, and she would turn to her conjured version of him to cope during difficult times. But she recounts how that all changed after a tragedy led her to discover the truth about why her father was in prison.

In this debut thriller, editorial assistant Nella Rogers is the only Black employee at the publishing house where she works, so she’s thrilled when another Black woman, Hazel, starts working in the cubicle beside her. The two bond over their shared experiences and culture until a string of uncomfortable events turns Hazel into the most popular person in the office, leaving Nella behind. When Nella starts receiving anonymous threatening notes on her desk, she starts to realize that there’s much more at stake than just her career, and that Hazel may not be as nice as she seems.

Former Washington Post and Boston Globe political reporter Sasha Issenberg traces the fight for same-sex marriage over a span of 25 years, beginning in Hawaii in 1990 and ending with the 2015 Supreme Court ruling that state bans on gay marriage were unconstitutional, making same-sex marriage legal across the United States. The Engagement takes readers to courtrooms, boardrooms, and debates during the coast-to-coast battle for marriage equality.

This second novel from the New York Times best-selling author of the hit romance Red, White, and Royal Blue is a love story that spans time and subway stops. August is a cynical 23-year-old who doesn’t believe in magic or cinematic love stories…until she meets a gorgeous punk rocker girl named Jane on her subway commute. August soon finds that her crush is strange, even by New York standards. Jane is, in fact, a time traveler from the 1970s who’s found herself stranded in the 2020s, unable to get back to her own time. She’ll need August’s help to do it.

Poet and Atlantic reporter Clint Smith’s debut nonfiction book takes a deep dive into the legacy of slavery, and how the history of America’s relationship to slavery plays a role in our collective narrative. Starting with his hometown of New Orleans, Smith makes his way across the South, examining the monuments and landmarks connected to slavery in America—those that offer an honest recounting of the past and those that don’t—and reflecting on how slavery has shaped the nation, both its past and present.

Former president Bill Clinton and prolific author James Patterson team up for their second action-packed blockbuster, on the heels of their successful 2018 novel The President Is Missing.” In this stand-alone thriller, Michael Keating is a former president of the United States (and a former Navy SEAL), now living in rural New Hampshire after losing his reelection bid. While Keating is hoping to live a quiet, anonymous life with his family, his plans are upended when he uncovers an imminent threat against his daughter. He’ll need to use all his SEAL training to thwart the plot.

In the wake of George Floyd’s death and the resulting Black Lives Matter protests that broke out around the world, Tupac Shakur’s song “Changes” became the anthem of protesters, 20 years after it was first released. The song quickly moved back into the public consciousness and the iTunes charts. In this book, written 25 years after Shakur’s death, Sheldon Pearce, a New Yorker editor and writer, takes readers on a comprehensive journey through the rapper’s life via interviews with those who knew him best. Pearce demonstrates how Shakur’s music, which addresses inequality and systemic racism, remains as timely today as when first released decades ago.

In this dark urban fantasy young adult (YA) debut, Voya Thomas is a teen witch waiting for her Calling—a trial all witches must pass in order to receive their powers. However, when she fails her Calling, one of her ancestors gives her a second chance to complete the challenge: she must kill her first love or risk not only losing her own chance of becoming a full-fledged witch, but watching as all Thomas witches are stripped of their magic as well. The problem? Voya’s never been in love.

Fans of international superspy James Bond will enjoy this new biography recounting the fascinating life of the creator of the Bond novels. The book takes a deep dive into the cultural events during Fleming’s lifetime that inspired his writing. In addition to exploring how serving in the military during World War II affected him, Oliver Buckton also examines how Fleming’s relationships with the women in his life shaped his portrayal of female characters in his books.

Cecilia Bassingwaite is a proper Victorian lady…except when she’s not. Between tea parties and beautiful dresses, she spends her time blackmailing friends and engaging in a little thievery. That’s the life of a member of the Wisteria Society crime sorority. When the sinister Captain Morvath, intent on destroying the Wisteria Society, hires assassin Ned Lightbourne to kill Cecilia, neither of them realizes they should never underestimate a woman. And of course, Ned’s infatuation with Cecilia might also get in the way of completing his mission.

Psychologist Grace Park is assigned to the Deucalion, a survey ship headed to an icy planet in an unexplored galaxy. Her assignment? To observe the 13 human crew members aboard as they assess the colonization potential of the planet. However, a radiation storm hits, trapping the ship on the icy planet and leaving the crew without means of communication until it passes. As time goes by, the human crew’s minds start to disintegrate, afflicting them with waking nightmares, and androids aboard the ship begin to act strangely. It’s up to Park to uncover the secrets of this mysterious illness, the mission, and the planet that they have landed on.

From the New York Times bestselling author of Mexican Gothic comes this noir mystery that transports readers to Mexico City in the 1970s, when the city is being rocked by student protests and political unrest. At the novel’s center is Maite, a secretary who escapes into stories of romance and danger. When her next-door neighbor, the beautiful art student Leonora, mysteriously disappears, Maite takes it upon herself to team up with an eccentric criminal to search for her. They soon uncover Leonora’s secret life as a student radical—and discover a growing attraction to each other.

In this thriller by the author of the acclaimed novel The Girl on the Train, the murder of a young man on his houseboat in London sets off widespread speculation about the identity of his killer. Could it be Laura, who went home with the victim and was later seen covered in blood? Is it the victim’s neighbor Miriam, who is determined to find out who his killer is? Or could it be the young man’s aunt, Carla, with whom he shared a tragic past? Each character has something to hide, whether it’s a murder, a dark past, or something more sinister. And in Hawkins’ masterful hands, our bet is you won’t be able to put this book down until you learn who the murderer is.

Putting Together Your Summer Reading List? Check Out Our Recommendations