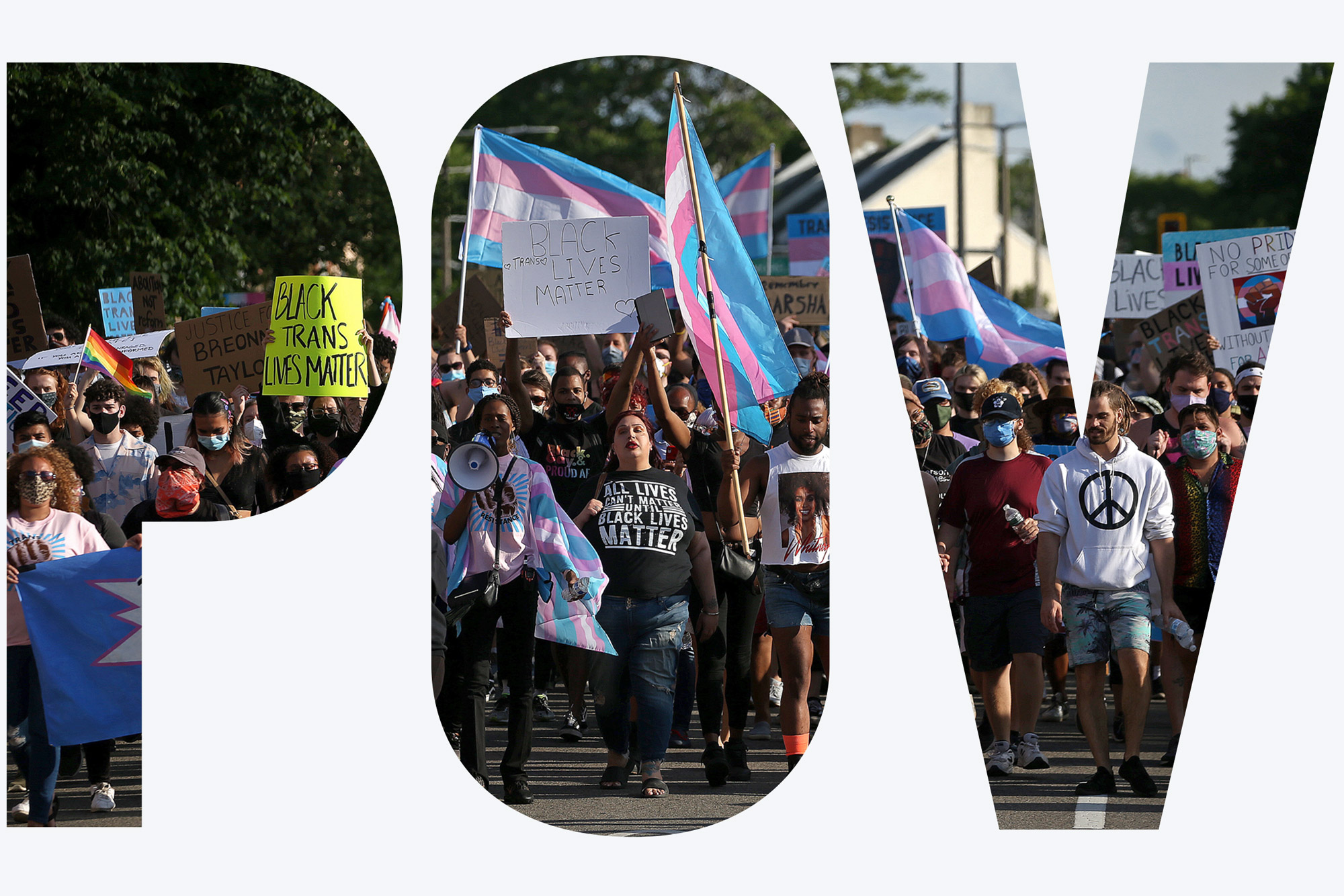 As an adopted queer, trans, Chinese person, I feel that I didn’t fully grow into my multifaceted identity until I arrived at BU, where I was surrounded by a diverse student body. As a first-year undergraduate student, I was lucky enough to make some really wonderful LGBTQ+ friends who fully embraced my whole being and supported my queer awakening and transition. On June 8, 2019—the summer after my first year at BU—those same friends and I arranged to attend the annual Boston Pride Parade together in celebration of our community.

I remember my excited anticipation the evening before, trying on countless outfits to ensure that I looked as visibly queer as possible. I had difficulty falling asleep that night as I kept imagining what it would be like to be in community with people who looked like, felt like, and experienced the world like me. I remember feeling pure joy as we walked from Brookline to Government Center, where the main festivities were being hosted—seeing everyone convene was like watching a stream become a river flowing into the ocean.

Unfortunately, the journey there was the highlight of my day. Upon arrival, I was quickly overwhelmed by the intense corporatization of Boston Pride and the countless floats distributing capitalist swag with “special” rainbow logos. Where were the trans and BIPOC community organizations? Where was my community? I was deeply disappointed to find that many large companies were profiting off of the LGBTQ+ community’s desire for visibility by slapping rainbows on their products and calling themselves allies. Pride began as a riot against police brutality led by Black and Latine trans women, so the corporatization of the Boston Pride Parade by historically white companies felt extremely disrespectful of its roots. Throughout the day I continued to feel overwhelmed, confused, and like I didn’t truly belong there.

Today, as a rising senior with far more knowledge and experience with LGBTQ+ activism during the time of Black Lives Matter and Stop Asian Hate, I understand why I felt like an outsider as a trans person of color at Boston Pride. The Boston Pride board consists almost entirely of cisgender white people who hold exclusive power over all Boston Pride–related decisions.

Last year, when I heard that numerous LGBTQ+ community organizations were organizing a boycott against the Boston Pride board due to repeated failures to address structural racism and trans-exclusionary practices, I realized I wasn’t the only one who didn’t feel welcome in that space.

According to one of the primary organizers of the boycott, Pride 4 the People, a nonprofit seeking to end the structural racism and white-centeredness at the heart of Boston Pride, the Boston Pride board has had “a long history of poor relationships with Greater Boston’s communities of Queer & Trans, Black, Indigenous, People of Color (QTBIPOC). This structural exclusion has forced QTBIPOC communities to organize their own Pride events through the decades,” demonstrating the board’s failure to address structural racism.

It’s also been very concerning to hear that the Boston Pride board voted to not support #BlackLivesMatter in May 2020, resulting in the resignation of 80 percent of their volunteer workforce. Given these trends and my own experience, I have no confidence in Boston Pride’s current leadership to be representative of the entire LGBTQ+ community. As a queer and trans member of the BU community, I feel that it is my responsibility to raise awareness and help provide context for this issue.

Pride is not only a time for celebration and joy, but a time for reflection and recognition of LGBTQ+ struggles and history. QTBIPOC lives are inextricably connected to Pride. I would not have the privilege to live as my authentic self, embracing my intersectional identity, if not for the Black and Latine trans women who dedicated their lives to fighting for queer and trans liberation.

As an executive board member of BU’s Queer Activist Collective (“Q”), I am proud to be part of a majority QTBIPOC executive board that is extremely dedicated to promoting the inclusion of QTBIPOC members of the LGBTQ+ community through educational and allyship events. Until the board of Boston Pride addresses the community’s demands, I will be boycotting the organization as a member of Q alongside many other community organizations that value and empower Black, brown, and transgender activists. To learn more about the movement to boycott Boston Pride, check out Q’s official statement @bostonuq on social media.

Instead of taking part in Boston Pride’s planned virtual events this June, I will be attending and supporting the second annual Trans Resistance March, Vigil & Pride Fest tomorrow, Saturday, June 12. Trans Resistance is a movement founded by queer and trans activists in direct opposition to the structurally racist and trans-exclusionary Boston Pride board. All funds raised will support the Black Trans Lives Matter Campaign in partnership with the Transgender Emergency Fund to support low-income and transgender people in Massachusetts.

I strongly urge the Boston University community to join me at the Trans Resistance March & Vigil this month to experience Pride in its most authentic form—led by Black and Latine trans women and bolstered by nonprofit community organizations—as we celebrate the accomplishments of our ancestors and continue the fight for BIPOC Trans Liberation.

Evan Gilbert (CAS’22) (he/him/his) is the GSA program administrator for the Massachusetts Safe Schools Program for LGBTQ Students and an executive board member of Boston University’s Queer Activist Collective. He is a strong advocate for LGBTQ+ rights and representation. He can be reached at evanfg@bu.edu.

There are 7 comments on POV: Why I’m Boycotting Boston Pride