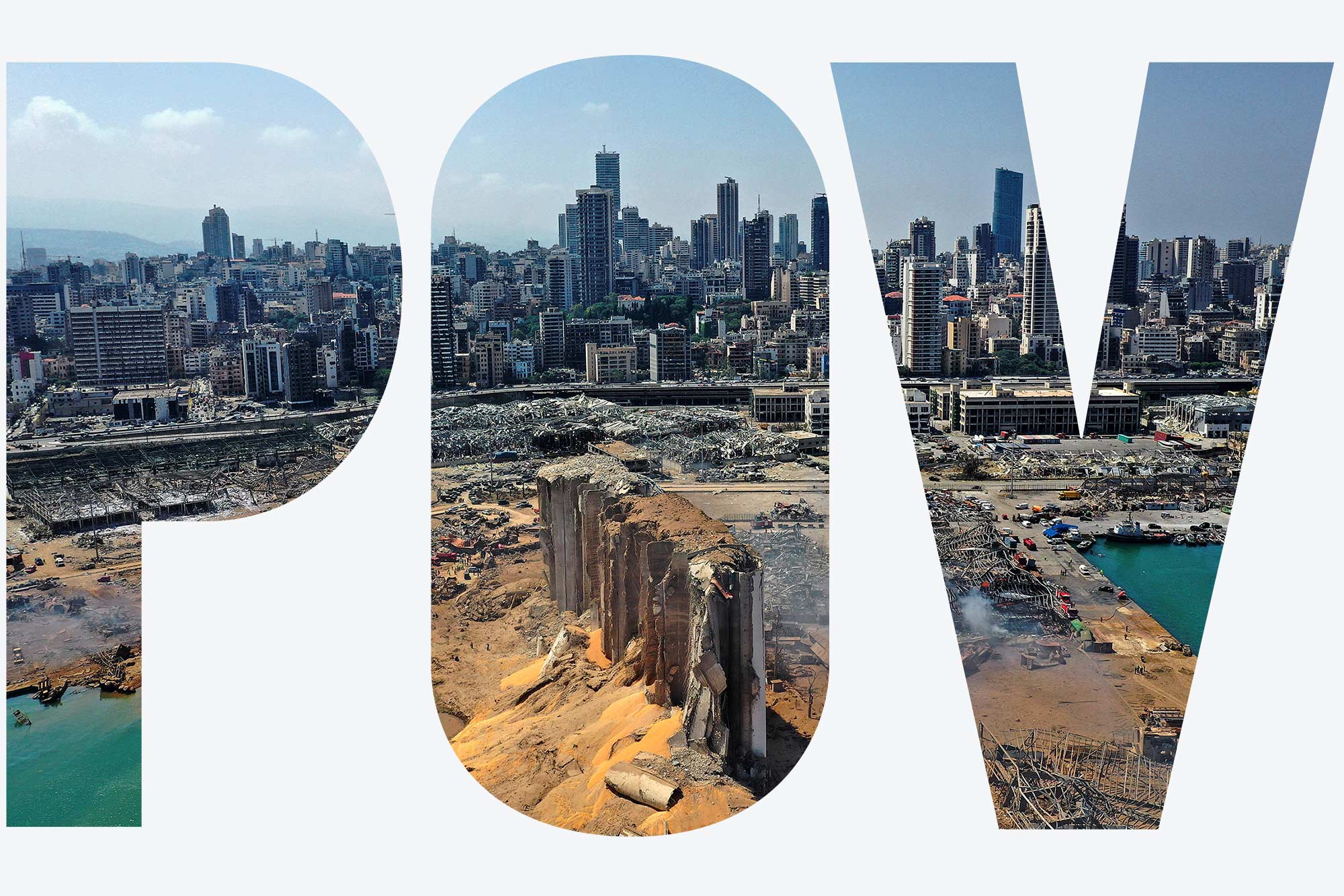 An aerial view shows the massive damage done to Beirut port’s grain silos (center) and the area around it on August 5, 2020, one day after an explosion tore through the harbor in the heart of the Lebanese capital with the force of an earthquake, killing more than 200 people and injuring over 7,500. Photo by AFP via Getty Images

POV: One Year after the Beirut Port Explosion, Who’s to Blame?

Today—August 4, 2021—marks the one-year anniversary of the disastrous Beirut port explosion, which claimed the lives of more than 200 people, injured another 7,500, and shook the city to its core, leaving behind billions of dollars in damages. Already struggling under the burdens of a deeply corrupt government, a crumbling economy, protests, food shortages, and an inflation rate of 95 percent, the explosion served as a stark symbol to the world of Lebanon’s decline. Beirut, once described as the “Paris of the Middle East,” had been reduced to rubble.

The explosion, which is still under investigation, was avoidable, the result of a corrupt system that repeatedly failed to act to avert the tragedy. How could a nation that had survived 15 years of civil war be reduced to such a state? Lebanon could no longer solve the many problems it had previously faced with a unified voice. Instead of fixing Lebanon’s infrastructure crisis or addressing the strain caused by the influx of Syrian refugees pouring into the country, government officials lined their pockets with bribe money and hid it overseas.

The Lebanese diaspora has become increasingly concerned and frustrated with the growing complexity of the situation. The Lebanese people, who continue to be battered by the effects of the explosion, along with soaring inflation, fuel shortages, and corrupt governance, struggle to see what the future holds for their country. Our cries for change seem to have no effect. It has become evident that we will have to fight long and hard to regain freedom.

As natives of Beirut, our homeland has always been a source of pride that we have carried with us throughout our lives. We continue to feel indebted to the country that made us the people we are today.  But the fear that we felt a year ago remains vivid. Aside from the concern we felt for our loved ones, we experienced deep frustration, even rage—rage not over just an explosion that killed unsuspecting civilians, but rage over an incompetent political system that allowed for such a disaster to take place. To this day, we do not have definitive answers as to what caused the explosion, the sound of which still echoes in our minds, as it does in every other Lebanese’s shattered heart. Twelve months later, we can still feel the explosion, the vibration, and the pain.

August 4 last year began as a calm, normal day. Everyone was going about their business. At 6:07 pm, the blast occurred, instantly leveling buildings and sending thousands of Beirut residents scrambling for safety. People rushed to call their loved ones, uncertain of where they were at the time of the explosion. While we have seen other catastrophes in Beirut, this one was different. That day, many of us lost an acquaintance, friend, family member, or significant other.

Every time a tragedy occurs in Beirut, one is left with conspiracy theories over what caused it, left searching for answers.

How much longer can we remain resilient in the face of so many daily struggles that seemingly have no solutions? Only an international investigation may yield results into the port explosion, as the country’s corrupt politicians continue to hide the truth of the catastrophe and the depth of their dysfunction.

We, the Lebanese, must hold our government officials accountable. We cannot allow the events of August 4 to fade into the past without making sure those responsible for the calamity are brought to justice. Protests against the nation’s corrupt government must continue all over the world, especially in Beirut. The fight for Lebanese freedom is worth the sacrifice.

Beirut has been called the “Phoenix City,” because of its ability to rebuild after destruction. August 4, 2020, marked the eighth time the city has been destroyed. Once again, we have picked ourselves up and have begun rebuilding, because we will never give up on our beautiful city. We do so with the hope that those accountable for Lebanon’s situation will face justice.

Sara Abi Karam (Questrom’22) is treasurer of the Boston University Lebanese Club and can be reached at saraabk@bu.edu.

Nicholas F. Hajjar (Questrom’23) is secretary of the Boston University Lebanese Club and can be reached at nfhajjar@bu.edu.

POV: One Year after the Beirut Port Explosion, Who’s to Blame?

There is 1 comment on POV: One Year after the Beirut Port Explosion, Who’s to Blame?

POV: One Year after the Beirut Port Explosion, Who’s to Blame?
1
share this