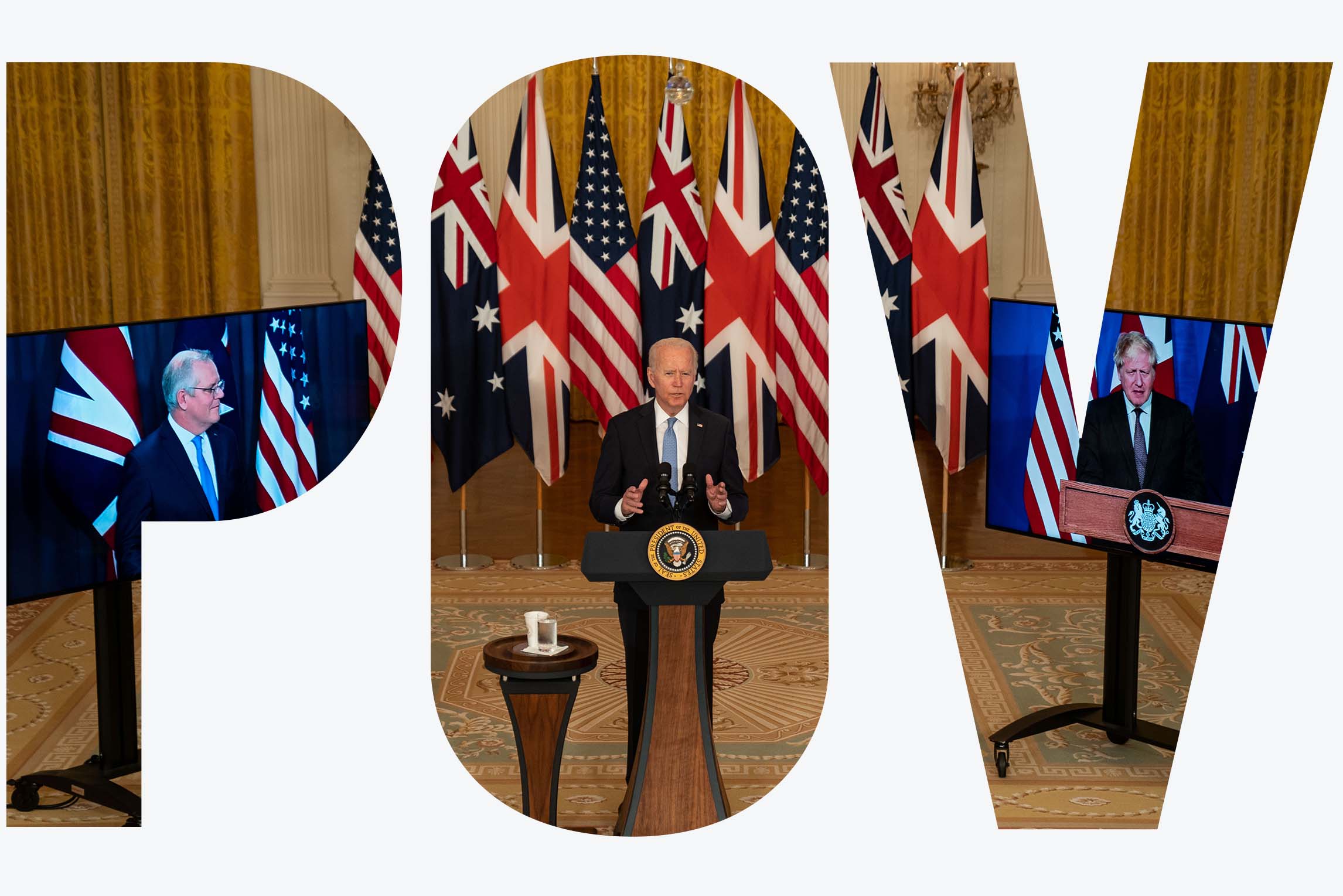 The new trilateral defense partnership that Australia, the United Kingdom, and the United States (AUKUS) announced September 15 is an important step in America’s plans to “rebalance” its global commitments as its Middle East wars end.

Now the United States must advance broader diplomatic and economic initiatives in the Indo-Pacific region and avoid relying excessively on military steps. It is time to rebalance the rebalance.

The AUKUS deal will furnish nuclear-powered (not nuclear-armed) submarines to Australia based on US and UK designs and promote cyber and artificial intelligence collaboration. AUKUS offers security and political advantages to all three nations.

Through AUKUS, a post-Brexit Britain demonstrates it is not isolated and may shore up unity within the British Isles; Prime Minister Boris Johnson highlighted the opportunity for jobs in Scotland and across the UK in extolling the deal.

For the United States, AUKUS supports a long-planned strategic shift.

In 2011, President Obama proclaimed in the Australian Parliament the US intent to implement a pivot to Asia—later dubbed “rebalancing.” But US wars in Iraq and Afghanistan distracted Washington while China proceeded with its defense buildup, including dredging sand to create artificial islands which it claimed as sovereign territory and on which it then established military bases.

With its wars in the Middle East now wound down, America can begin to concentrate more on the Indo-Pacific.

AUKUS plays to Washington’s strengths, its ability to forge mutually reinforcing partnerships across the globe. The partnership augments existing US bilateral security pacts with Japan, the Republic of Korea, the Philippines, and Thailand. It also buttresses the Quad, which brings together the United States, Japan, Australia, and India.

As President Biden said in announcing AUKUS, “This is about investing in our greatest source of strength—our alliances—and updating them to better meet the threats of today and tomorrow. It’s about connecting America’s existing allies and partners in new ways….”

AUKUS is a welcome foreign policy success for Biden following the messy US withdrawal from Afghanistan, albeit a withdrawal most Americans support.

Chinese Foreign Ministry spokesperson Zhao Lijian displayed Beijing’s ire over AUKUS, saying the pact “seriously undermined regional peace and stability, intensified an arms race and undermined international non-proliferation efforts.” Beijing should not be surprised others want to balance the Middle Kingdom. China has been on a binge of naval and missile construction. As former Department of Defense Undersecretary Michele Flournoy noted, China “developed an expanding set of asymmetric approaches to undermine US military strengths and exploit US vulnerabilities, including robust ‘anti-access/area-denial’ (A2/AD) capabilities. These new capabilities—cyber and electronic weapons, air defenses, arsenals of precision missiles such as anti-ship weapons—are designed to disrupt and destroy US command-and-control networks and thwart US power projection into the Indo-Pacific.”

China’s expansive territorial claims in the South China Sea have other Pacific partners worried as well.

Australia has long said, “We don’t have to choose” between their economic links to China and US security ties. China, having overplayed its hand with Canberra in numerous ways, is now seeing the result.

While stronger security cooperation is necessary, it is not sufficient to rebalance the US position in the Indo-Pacific. Excessive reliance on military instruments could be self-defeating and would undervalue America’s comparative advantage relative to China. Washington must accompany security steps with reinforced diplomatic and commercial cooperation, too.

To start, Washington needs to mend fences with France, which has important territorial possessions and economic and security interests in the Pacific, where France can be a valuable partner. The AUKUS deal supplanted France’s own $66 billion submarine contract with Australia, bruising French pride and scoring a hit against French defense industries and jobs as French President Emmanuel Macron prepares for presidential elections in the spring. Macron exploded, recalling his ambassadors from Washington and Canberra.

Washington could draw France, Canada, Japan, or other partners into AUKUS or other forms of collaboration in other domains. As President Biden said, the United States can connect existing allies and partners in new ways. US multilateral cooperation need not—and should not—be one-size-fits-all. Instead of building new islands, Washington can build new partnerships.

More important, the United States needs to overcome President Trump’s self-inflicted error of withdrawing from the Transpacific Partnership trade group (since redubbed the “Comprehensive and Progressive Agreement for Trans-Pacific Partnership,” CPTPP) by the remaining 11 partner countries who pressed ahead.

To rub Washington’s nose in the error, Beijing itself applied for membership in CPTPP.  A grouping built to cement US commercial engagement with the region on terms favorable to the United States is now in danger of being dominated by China, with us left out.

Joe Biden told the UN General Assembly last month that the United States would “open a new era of relentless diplomacy” to address global challenges. We must reinforce the  AUKUS security initiative with the relentless diplomacy President Biden promised.

Mark Storella is a Frederick S. Pardee School of Global Studies professor of the practice of diplomacy and a former US ambassador to Zambia. He can be reached at mcs32@bu.edu.

There are 2 comments on POV: Ensuring Balance in US/Indo-Pacific Strategy