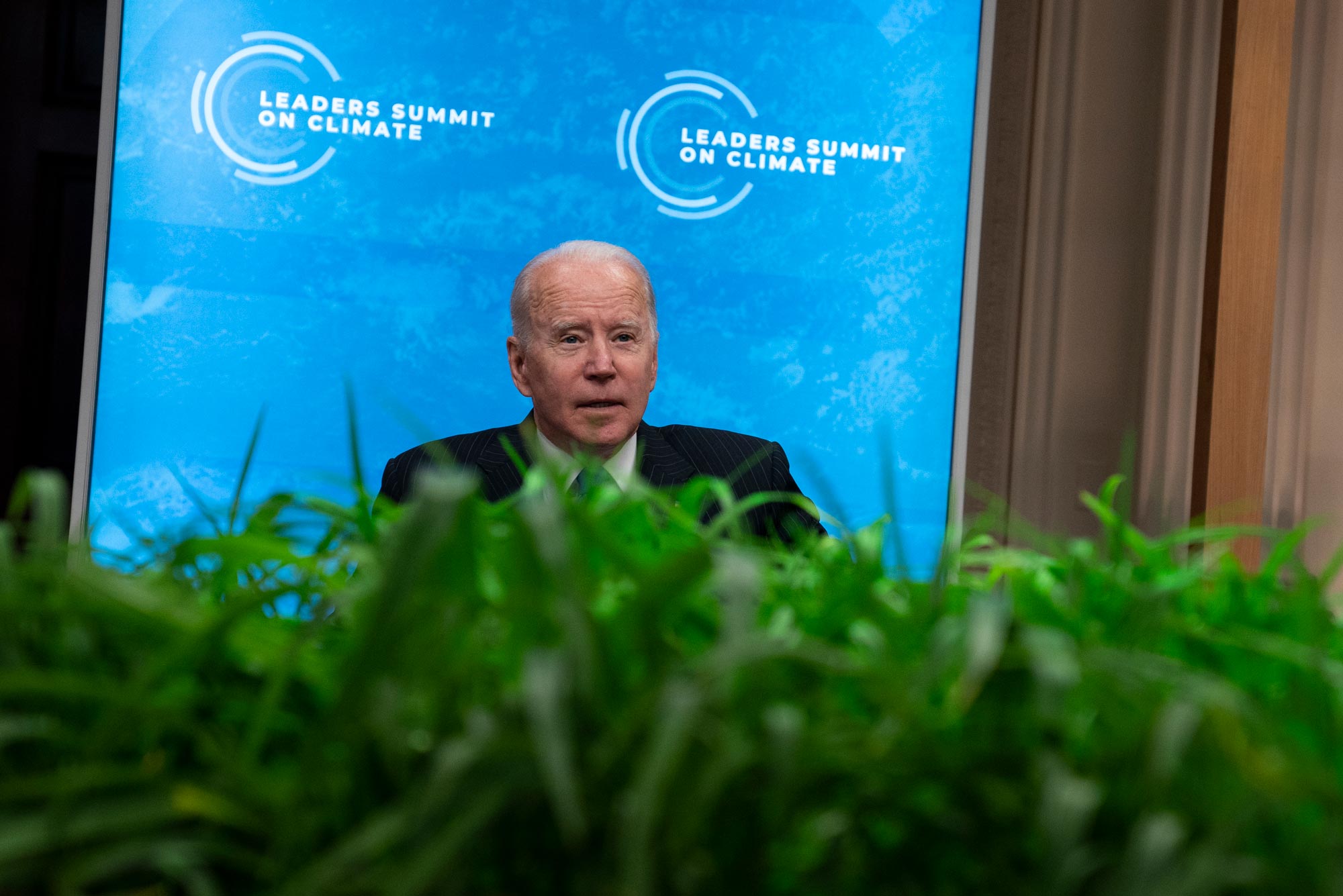 President Joe Biden at the Leaders Summit on Climate on April 22, 2021, where he set emission reduction targets for the United States to reach in the next decade, as well as environmental justice and economic goals. Photo by Evan Vucci/AP

How the US Can Cut Carbon Emissions in Half by 2030, with or without Congress

BU environment and climate experts are hoping to see major changes in the next nine years, including investments in clean energy, alternative transportation, and more

For decades, climate experts have warned of the dire consequences of failing to lower planet-warming greenhouse gas emissions that come from burning fossil fuels—from deadly heat waves to droughts to severe floods. These climate change–fueled disasters can sound like biblical plagues, but the quicker the economy transitions to a clean energy economy, scientists agree that more frequent and even worse disasters will be avoided. To move the US further along the carbon-free path, President Joe Biden has announced his administration’s goals for reducing the country’s greenhouse gas pollution by 50 percent below 2005 levels by the year 2030.

“[This] decade is a crucial window in which we need to cut emissions dramatically in order to have a chance of meeting the ultimate goal of being carbon neutral by 2050, which is what the science informs us our goal must be,” says Jacqueline Ashmore, clean energy researcher and executive director of BU’s Institute for Sustainable Energy.

It’s a new way forward after four years of environmental regulation rollbacks by the Trump administration, which Biden and his team have already begun reinstating. With so much at stake, and a lot of policy decisions to keep track of, there is still a long road ahead to transforming the energy economy in a short window of time, with no singular path to get there. That is why utilizing every possible path for change, other than laws and legislation, will be critical for meeting those goals to ultimately save our own species, and millions of others, on the planet.

“Environmental policymaking for the last 30 years has gone to alternative pathways rather than big legislation,” says Sarah Phillips, a historian of modern American environmentalism and a BU College of Arts & Sciences associate professor of history, who specializes in New Deal policies that led to current environmental politics. Alternative pathways, she says, help make big changes without needing congressional votes. Since the votes for a Green New Deal or any large climate agenda are not there, it’s crucial that Biden use all of the alternative pathways available, she says. This includes administrative duties, executive actions, and other duties within government agencies that can wield their power for the good of the climate.

There doesn’t need to be a contest between protecting our resources and environment, and protecting people.

Biden seems to be working through a lot of these pathways already, Phillips says, like using the Environmental Protection Agency’s authority to pass rules and regulations, such as limiting planet-warming chemicals and pollutants used in various sectors. Other non-congressional actions could look like canceling fossil fuel leases on public land, limiting ways for companies to explore for natural gas, stopping pipelines like Line 3 and the Dakota Access Pipeline, and much more.

“There doesn’t need to be a contest between protecting our resources and environment, and protecting people,” Phillips says. “The setup we have currently is a result of previous government decisions that have tilted the balance towards fossil fuels. We can tilt the other way with different kinds of investments.”

Biden has said that these kinds of investments in clean energy, sustainable agriculture, and other types of climate resilience can translate into more jobs.

“A crucial set of jobs we need to generate are associated with providing low-income and environmental justice communities with access to renewable energy and energy efficiency services,” Ashmore says. Programs that fund energy efficiency improvements for buildings and affordable housing are important, she says, and a new clean energy workforce should draw on historically underrepresented groups.

Biden has separated himself from the concept of a formal Green New Deal—a policy framework that drew national attention in late 2018, largely as a result of youth climate activism. But, when people talk about a Green New Deal now, Phillips says, they mean: “let’s combine the political appeal of jobs with a transition to a new energy and transportation infrastructure, with the promise of jobs and economic development.” Some of those principles are present in the national climate agenda, such as reinventing a Civilian Conservation Corps—as part of Biden’s American Jobs Plan—which raised wages and gave people jobs in the 1930s.

“We have to consider who will receive the benefits of climate investments in clean technology and alternative transportation, and watch closely to make sure they are distributed across communities and not only concentrated in wealthier districts like they have been in the past,” says Alicia Zhang, a PhD student and research fellow at BU’s Institute for Sustainable Energy. “That way we can have not only a green transition, but also a just transition to a sustainable economy.”

Zhang, who studies the role of corporate sustainability in achieving climate mitigation, hopes to see the federal government do a better job of exerting and maintaining pressure on fossil fuel–reliant companies that emit the most carbon. She also hopes the government doesn’t let emissions get outsourced to other, poorer countries. “This allows one country to reap the benefits of lower emissions, but pushes the burden unjustly on others,” she says.

We have to consider who will receive the benefits of climate investments in clean technology and alternative transportation.

Alongside administrative rulemaking and massive infrastructure and job planning—including proposing wind and solar farms and thousands more electric vehicle charging stations—market and consumer forces can add to driving the transition toward renewable energy and clean transportation, Ashmore says. Investors are seeing lower risks associated with renewable energy and higher risks associated with fossil fuel, which moves costs in favor of renewables. But trends and the low costs of clean energy sources are likely not enough on their own to lead to major shifts. “Vast investment is needed alongside market forces to achieve this level of emissions reduction, and that’s why leadership from the federal government is critically important,” Ashmore says. “Cutting emissions rapidly is our generation’s Moonshot project.”

The Institute for Sustainable Energy at BU recently partnered with the UK government to promote ways for cities, both in the UK and US, to lower carbon emissions. Representatives from cities in both countries, including Boston, collaborated to come up with ways to reach the ultimate goal of zero emissions.

“The goals of cutting emissions by half by 2030 and net zero by 2050 are ambitious goals that will require transformative change,” Ashmore says. “There is absolutely a risk that we will miss those goals, but it is imperative that we commit to trying our absolute best to meet them. The science tells us that the health of our species, and the health of many other species on the planet, is reliant on us making this change.”

How the US Can Cut Carbon Emissions in Half by 2030, with or without Congress

There are 6 comments on How the US Can Cut Carbon Emissions in Half by 2030, with or without Congress

How the US Can Cut Carbon Emissions in Half by 2030, with or without Congress
6
share this