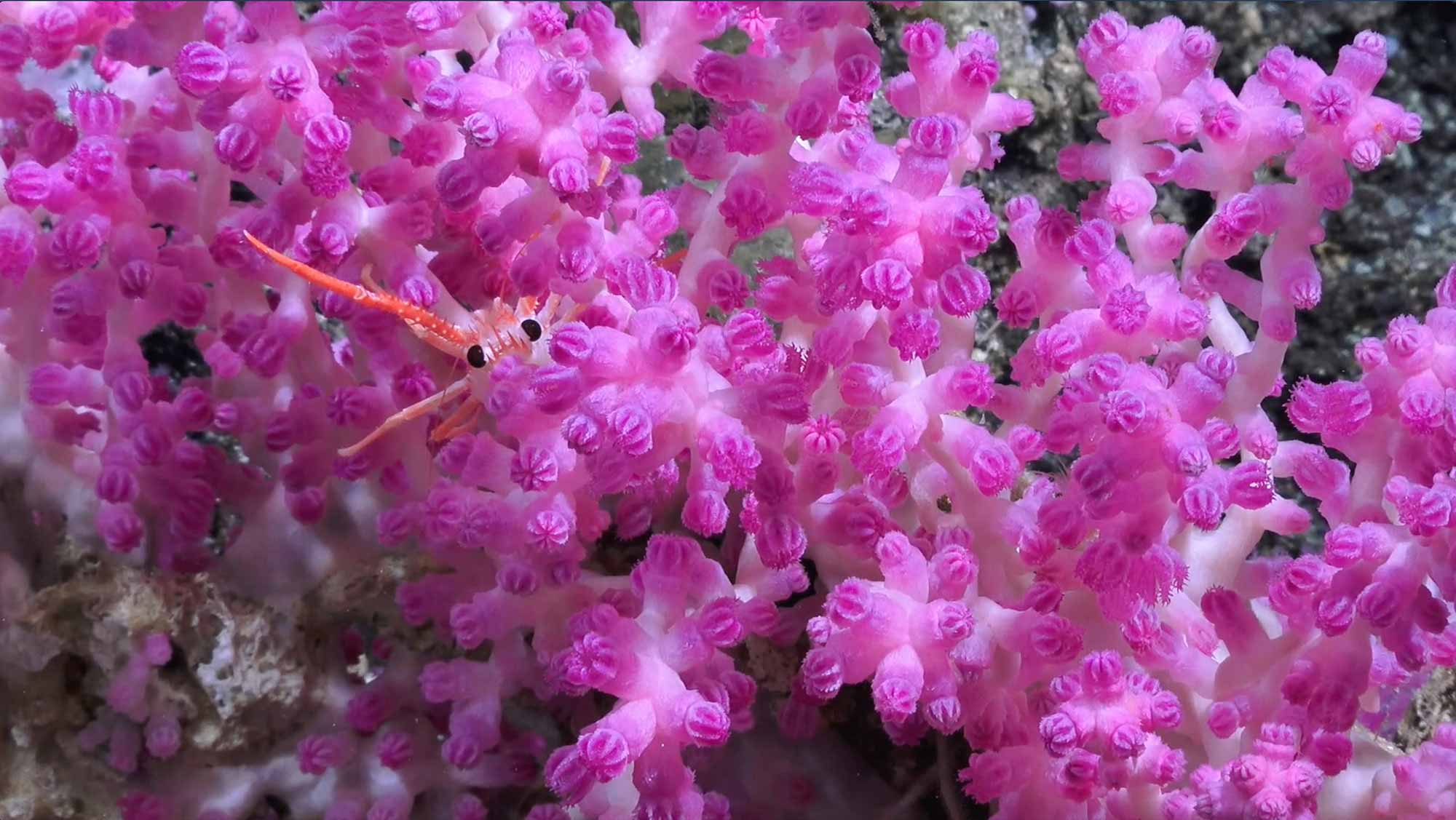 A colorful deep sea soft coral with a squat lobster are illuminated by the ROV SuBastian in the Phoenix Islands Protected Area. Photo by Schmidt Ocean Institute

BU and other researchers spent weeks at sea harvesting new types of microbial life, only to be shocked by their results

In the largest and deepest marine protected area in the world, a team of ocean experts peered over 3,000 meters below the surface to find new types of microbial organisms that people would have never encountered before. These microbes—types of bacteria—could now open up doors to new ways of understanding how the immune system responds to completely foreign invaders.

A collaborative study among the Rotjan Marine Ecology Lab at Boston University, the Kagan Lab at Harvard Medical School, Boston Children’s Hospital, the government of Kiribati, and others has found that there are some bacteria so foreign to humans that our immune cells can’t register that they exist, overriding the long-held belief of universal immunity, or that our cells can recognize any bacteria they interact with. Rather, the study found, some bacteria are solely defined by their local habitat or surroundings. Their findings were published Friday, March 12, in Science Immunology.

“Our team discovered and cultured novel microbes that are completely immunosilent to human immune systems,” says Randi Rotjan, meaning that the bacteria triggered no reaction or response from our innate immune system. Rotjan, a BU College of Arts & Sciences research assistant professor of biology and a co–lead author of the paper, says this discovery was completely unexpected.

The research is the culmination of five years of study, across 2,000 nautical miles of central Pacific Ocean waters, with thousands of genes sequenced and with much of the work at sea being done on a floating laboratory.

Rotjan, whose research focuses on live coral reefs, says that the interdisciplinary nature of their team was also a major strength—with co–lead authors Anna Gauthier, a visiting student at BU in the Rotjan Lab whose research focuses on the immune systems of marine organisms, and Jonathan Kagan, who studies the ways cells interact with each other and with the microbes they encounter. In addition to being faculty in BU’s biology department, Rotjan is co–chief scientist of the Phoenix Islands Protected Area, an expanse of marine and terrestrial habitats in Kiribati—and the largest and deepest UNESCO World Heritage Site—where the work took place. The Brink caught up with Rotjan, and this Q&A, which also reflects the findings and research of  Gauthier and Kagan, has been condensed and edited.

The Brink: How did this research get started?

It’s generally assumed that [our innate immune system] can detect any microbe—or bacteria—we encounter, including from environments we are never exposed to, like the deep sea. But the more our team spoke, the more it became clear that there are major gaps in our knowledge. No one had ever really tested the universality of the rules of immunity. With all of us sitting in the same room, having different perspectives and expertise, we realized there was a unique opportunity to explore this further.

The Brink: How does this research change our understanding of immunity?

To deep-sea bacteria, humans are Martians, and vice versa. The novel bacteria from the deep sea that we collected and tested would never have had the natural opportunity to interact with humans—since they live thousands of meters below the surface. So, we asked the questions, what would happen when organisms from these distinct ecosystems interact? Fast-forward five years, thousands of plates poured, and an immeasurable number of conversations, we have evidence that the immune system of mammals has the ability to detect microbial bacteria from our home habitat, not habitats that are foreign like the deep ocean. The inability of immune receptors to detect most bacteria from a different ecosystem suggests that pattern recognition strategies may be defined locally, not globally.

The Brink: What are the implications of these findings?

All bacteria cells have an outer coating. Lipopolysaccharide, or LPS, is the outermost layer of the bacterial membrane. This outermost layer is what allows other organisms to recognize it. LPS receptors of human cells, mice, and horseshoe crab, were unable to detect 80 percent of deep-sea bacteria examined. Now that we know this, there is a pressing need to learn more about host-microbe interactions in every ecosystem, as new discoveries may be made in each habitat. This opens up the potential for new biological tools and therapeutics. For example, using the silent bacteria as a way to deliver medicine or an immune therapy. A mechanistic understanding of our own immune system, coupled with an increased understanding of deep-sea life, opens up new avenues of science to simultaneously help human health while also providing important justification for increasing ocean protection. Interdisciplinary collaboration really opens up new worlds.

The Brink: What is it like working in this floating lab?

It’s a completely and wholly immersive experience, in a very remote part of the world—other than our team and those on the island, the closest people near you are on the International Space Station. It’s about a seven-day journey by boat from Hawaii. The Schmidt Ocean Institute research vessel we worked on, the R/V Falkor, costs upwards of $75,000 a day to operate, and is equipped with 38 screens in the control room—it’s completely nuts. There were about 40 people on the ship all working toward the singular goal of viewing the corals and collecting samples. The bacteria are collected from the deep sea, using a tethered SUV-sized robot called the SuBastian controlled from the surface. The robot collected corals, slurped sediment, and sucked up water that was then analyzed at our labs back in Massachusetts. We were out [at sea] culturing the bacteria, but no one was expecting immunosilence.

The Brink: What was it like to conduct research in the middle of the Pacific Ocean?

Kiribati, where our team was based in 2017, is listed by the United Nations as a least developed country, and they have made an incredibly large ocean conservation commitment. One important aspect of this study is that it is a collaborative effort with the government of Kiribati, showcasing the importance and beauty of international partnerships. The deep sea of the Phoenix Islands Protected Area was largely unstudied until now. These novel microbes may or may not be unique to the Phoenix Islands Protected Area—future studies need to be conducted—but the existence and prominence of this protected area has driven cutting-edge research to this particular patch of ocean. Studies like these help to demonstrate the value of marine protected areas and conservation. Although most of the deep sea is unknown and unseen, it is clear that it has transformative potential both for the ocean and for ourselves.

The Brink: What excites you most about this discovery?

The diversity of microbial life and the chemical structures they express in the deep sea are totally underexplored. This paper provides the first detailed examples and lays the foundational groundwork, but there is so much more to be done. Now that we have this new way of understanding LPS interactions with human cells, we can use this to understand more about mammalian immune systems: such as probe the origins of immune response, identify nuances in signaling pathways of microbial recognition, and increase the potential for immunotherapeutics.

The Brink: What will you be exploring on your next expedition?

We are heading back to sea with the Schmidt Ocean Institute in June 2021, building upon this last expedition, where we discovered these microbes. Our next trip will be back on the R/V Falkor, this time working in both Kiribati and US waters, since they have adjacent islands in the central Pacific. We will be following up on this initial study, but will also flip this question around to examine the immune systems of sponges and corals in the deep sea to understand the origins of these microbes, and how these microbes play a role in their home environments. Nature is so complex and has provided so many different mechanisms of response. There is much left to explore.

The Deep Ocean Reveals Surprising Discovery about Immunity
3
share this