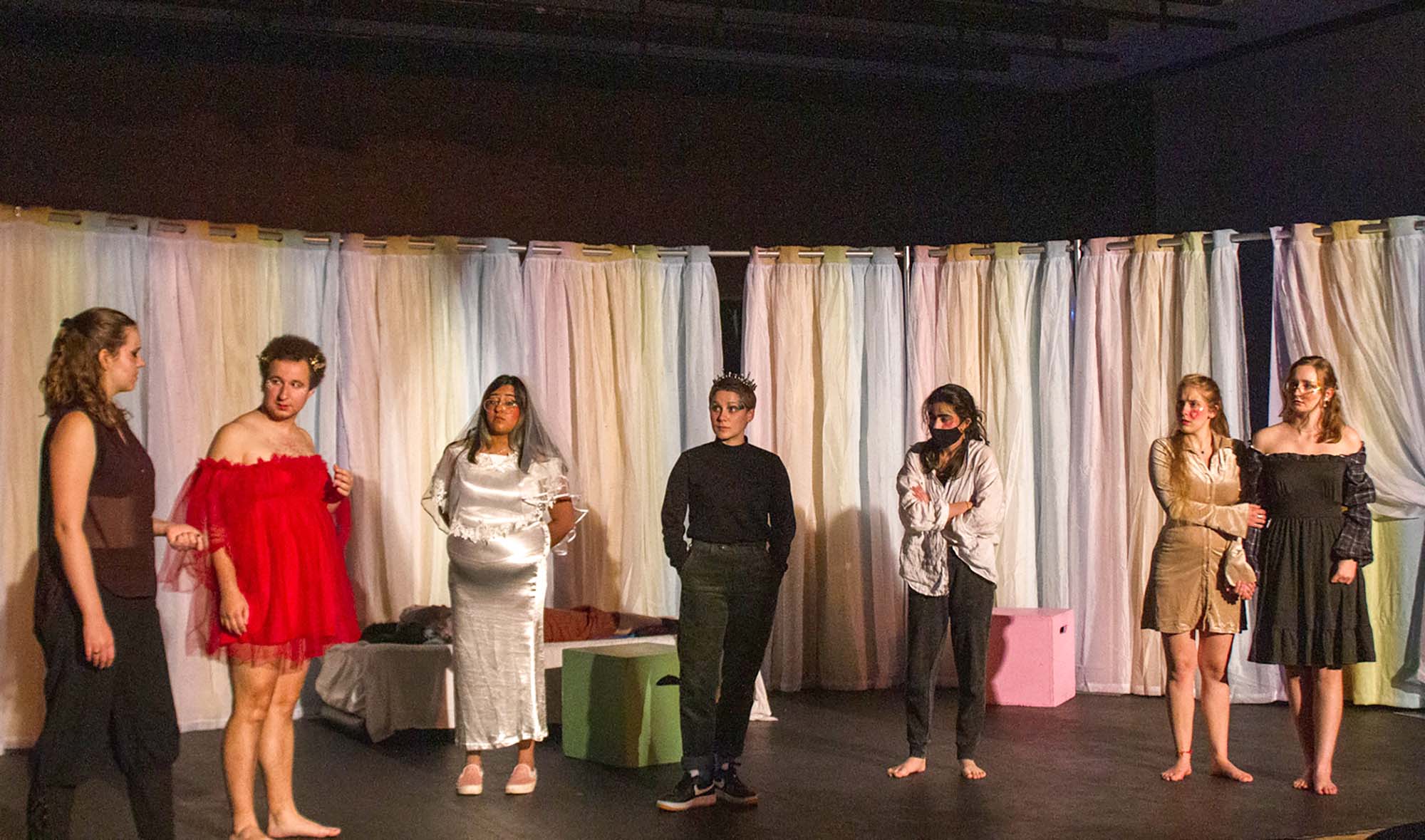 Back to the Stage: BU’s Shakespeare Society Puts On A Midsummer Night’s Dream

Lights, costumes, makeup, scenery—not to mention a live, in-person audience—and other aspects that make a theater production come to life are in motion for this weekend’s BU Shakespeare Society performances of A Midsummer Night’s Dream. After nearly two years away from the physical stage, society members are eager to perform before a crowd.

Club members say their play will be a “love letter” to the LGBTQ+ community, with characters’ stories expanded beyond the heterosexual romance typically depicted in Shakespeare plays.

A comedy written around 1595, A Midsummer Night’s Dream focuses on a young woman running away with her lover to escape an unwanted marriage. Meanwhile, a group of actors are controlled and manipulated by fairies that revel in the deepest part of the woods. The play is one of Shakespeare’s most popular works.

BU’s Shakespeare Society was started in 2003 by a group of Shakespeare enthusiasts, and members (who audition to join) can be from any BU school or college. There are 14 in the Midsummer cast and 6 running tech, designing costumes, and doing makeup. They rehearsed five hours a night on average during the week leading up to opening night preparing for the production. All students were vaccinated and followed BU’s protocols. They wore masks during rehearsals, but not for the performances.

Midsummer director Natalie Gonzalez (CAS’22) says she spent hours working the script, and the cast members are especially excited about the chance to perform again.

“After the pandemic, I wanted a comedy, needed a comedy, and one that didn’t have a clear main character or anyone who would end up on the sidelines,” Gonzalez says. “I wanted something ridiculous and fun for the cast to bond over without any competition or high stakes. Midsummer has the perfect cast distribution and really light material.”

The show is “very campy—we’re having fun and not playing into the gendered stereotypes,” says club secretary Carolyn Welter (CAS’22), who plays Hermia, one of the leads.

In the program’s director’s note, Gonzalez writes that “queerness has always existed… Shakespeare used ‘they’ to refer to people in the singular. In the late 1600s, Julie D’Aubigny strolled into a ball thrown by a French king’s brother dressed as a man… I don’t think of any of this as editorializing or queering history. Rather, I want you to see it as a true reflection of the parts of humanity that were forced into the shadows.”

For example, the personalities of two key characters, Oberon and Titania, are flipped for the Shakespeare Society’s rendition. Rather than Oberon being domineering and masculine and casting a spell on Titania, it’s Titania who takes on these traits and casts the spell. Additionally, some love stories, such as the subtle romance between characters Nick Bottom and Peter Quince, are emphasized.

“I was reading lines with another character who plays one of the lovers, and her affectionate term for her partner is ‘Good man Lysander,’” says Emma Murphy (CGS’22), who plays Nick Bottom. “And so I always call Peter Quince ‘Good Peter Quince.’ So there’s like that one descriptive word that actually means ‘I love you.’”

When Murphy joined the Shakespeare Society last year, all BU clubs were meeting over Zoom. Prior to that, she had taken a gap year, so it had been more than two years off the stage for her. She says the energy of the in-person rehearsals this semester has been spectacular.

“​​I just thought it was really fun to see everybody that I saw over Zoom. [It’s] like hey, I don’t really know you in real life, but I’m alive. I have a body,’” she says.

Auditions were held the second week of September and rehearsals began the next week. The cast split into two groups and rehearsed twice a week on separate days until they began running through the entire play daily last week.

“It’s a lot of energy in one place,” says first-time actor Anoushka Thakur (CAS’23), who plays Titania and Hippolyta. “But it’s really cool to see the finished product come together.”

Thakur had performed in front of audiences previously as a musician, either singing or playing the violin, and wanted to try a new form of performance, they say, more encompassing in regard to individual parts coming together to form something individually and collectively unique. They also wanted to challenge themselves by making a contribution to a performance that’s important and impactful.

Welter first fell in love with Shakespeare’s work in high school, and she believes the Bard’s plays still resonate with audiences centuries after they were written. “Shakespeare’s work definitely has a grasp on humanity and the range of human emotion,” she says. “It’s also witty, and once you get past the barrier to understanding the work, it becomes funny.”

These past few weeks have been especially busy for those both on stage and behind the stage, filled with memorizing lines and attending rehearsals in addition to keeping up with classes and taking midterms. Now, Thakur says, the excitement is tangible as performance weekend is finally here.

The Shakespeare Society production of A Midsummer Night’s Dream runs through Saturday, November 6, at the Student Theater at Agganis Arena, 925 Commonwealth Ave.. Performances begin at 7:30 pm. General admission is $7 and $5 for BU students; purchase tickets here.

Back to the Stage: BU’s Shakespeare Society Puts On A Midsummer Night’s Dream

Back to the Stage: BU’s Shakespeare Society Puts On A Midsummer Night’s Dream
0
share this