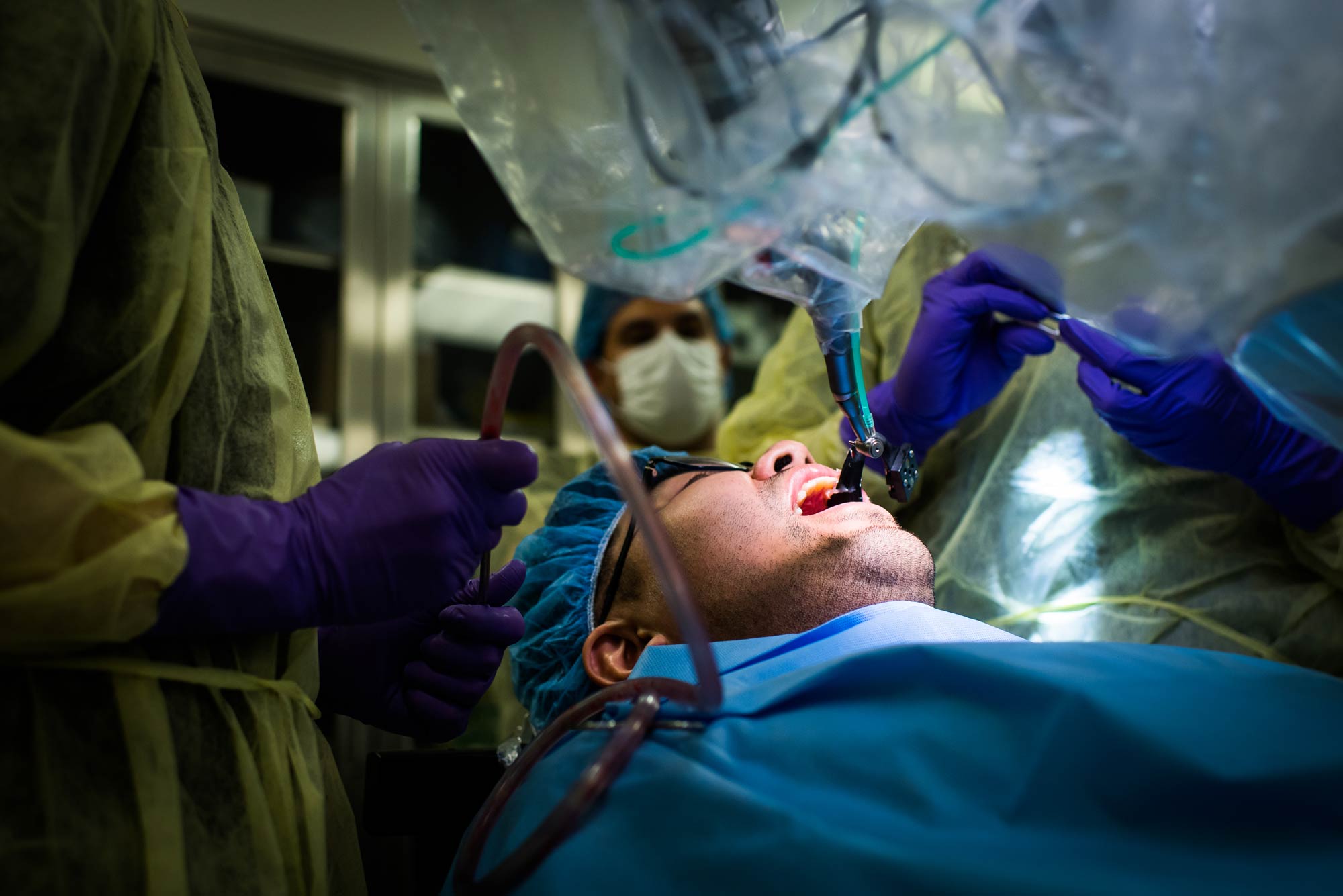 The robotic arm with a drill for a finger hovers over the patient in the dental chair. The arm extends from a white machine, called Yomi, that’s as tall as Andrew Henry’s chest and as wide as his outstretched arms. Henry, a BU Henry M. Goldman School of Dental Medicine clinical associate of oral and maxillofacial surgery, positions Yomi’s drill near the patient’s mouth.

Yomi is a symbol of the new world of digital dentistry that includes everything from smart toothbrushes to 3-D X-rays to robotic assistants, technologies aimed at shortening the number of dental visits patients require, and their time in the chair.

To make Yomi move, a technician types instructions on a keyboard that will guide the movements of this robotic surgical assistant. Atop Yomi’s midsection, a screen shows the inside of the patient’s mouth. Working together, robot and Henry will drill into the patient’s upper jaw and place a tiny titanium implant that will anchor a reconstructed tooth.

“Guided,” Henry says, amid the hiss of the operating room’s suction tube. The technician manning the keyboard types the command, and Yomi’s arm moves into position so the drill reaches the point where the implant is to go. “Locked in, ready to drill,” the technician says. “Drilling,” replies Henry, and a whirr commences as the technician counts off millimeters: “Two, four, six…” The operation finishes in an hour.

Six years after Jeffrey Hutter, dean of SDM, began adopting digital dentistry in the curriculum, the school has expanded its digital footprint: comprehensive digital patient records, computer-designed and manufactured implants and dentures, and computer-produced X-rays that are clearer, quicker, and less radiation-emitting than traditional X-rays.

“We’re not the only dental school that has some form of digital dentistry, but we are the only dental school that implements it across every single unit,” with 320 clinical predoctoral students having an opportunity to experience it, says Alexander Bendayan, an SDM clinical associate professor and assistant dean for digital dentistry development and clinical training. “Every department in the school will have access to the technology. It’s not only oral surgery.”

“We don’t want to train students like they are practicing in the 1960s,” Bendayan says. “In a few years, we won’t be talking ‘digital dentistry.’ We’ll be talking ‘dentistry,’” where standard operating procedure is all digitized.

For now, hundreds of patients at SDM are receiving digital care, including from Yomi, the first dental implant robot approved by the Food and Drug Administration. SDM is the first American dental school to use the robot, which doesn’t replace surgeons, but rather supplements their clinical judgment.

For example, during the implant surgery, Ruben Figueroa, an SDM associate clinical professor of oral and maxillofacial surgery and Boston Medical Center director of ambulatory services, who’d been trained on Yomi, supervised Henry’s work. Figueroa had created a virtual plan for placing the implant using 3-D scans of the patient’s mouth. But during the operation, he says later, “when I saw [where] the machine guided us to place the implant, we looked at it clinically [and saw] it wasn’t where we wanted it to be.”

He and Henry tweaked the location. Henry recalls how a previous “freehand” implant without the machine’s help penetrated the patient’s unusually low sinus. “Had we freehanded it” this time, Henry says, “you’re running the risk of going right into the sinus again.”

Among other digital firsts, SDM was the first American dental school to guide its implant surgery with computer-aided design and manufacturing (CAD/CAM) technology, which allows patients to get same-day, while-you-wait crowns and bridges made and put on their teeth.

Crowns once were a two-visit ordeal over at least a week that required a mold of the patient’s mouth to be made and sent to a lab. CAD/CAM scans your mouth digitally with a camera, flashing a 3-D picture on a computer screen. Software creates a virtually sized crown that once approved by the dentist is transmitted to a milling machine that carves a ceramic crown, ready to be applied.

About one-third of the roughly 1,000 restorations SDM makes with CAD/CAM technology each year, including crowns and fillings, are now done in one day, says Hesham Nouh (SDM’12,’15), a clinical associate professor and director of predoctoral prosthodontics and restorative dentistry. (Students also learn old-school methods, because for the immediate future some students who graduate will practice “in rural Maine, rural Vermont and may not have access to this kind of technology,” Nouh says. “Not everyone can afford this.”)

Here are some other digital technologies SDM has invested in:

Cone beam computed tomography (CBCT). This low-radiation X-ray technology rotates a scanner around a patient’s head, creating 3-D images in seconds of teeth, jaws, gums, and nerves. It can be used to diagnose oral diseases and tumors that might not show up on old-style X-rays, as well as to design guides for surgeries and implants. The technology’s 3-D digital model of the patient can help the dentist plan treatment even when the patient’s not in the office.

Digital radiographs. These are images of teeth that are digitized, unlike the development process behind traditional X-rays, which again have higher radiation. The images also are clearer and less time-consuming to produce.

Patient digital records. Every SDM patient now has a digital record that includes intraoral images and exams, tissue scans, and other scans such as CT and CBCT. These can be overlaid to make a 3-D rendition of the face, sparing patients a visit while students do treatment planning. Digital records can be shared with experts around the globe during secure, restricted consultations.

prepCheck. This software analyzes student work in digitally designing and preparing crowns, allowing faculty to evaluate their work digitally. And prepCheck allows students to check their results and practice independently.

There’s more to come. Later this year, SDM will unveil a virtual center for robotic-assisted surgery. Bendayan finished his own training in 2005, before the new era. “But I also have a computer science degree,” he says of his comfort with technology. “This just makes my life easier, first as an educator, secondly as a clinician.”

For all the money the school has spent on digital technologies, there’s one small item it doesn’t have that patients can hope might make their teeth and gums healthier and reduce their need for other procedures later in life. So-called smart toothbrushes tell users, via phone app, when they’ve missed a spot, maybe preventing a future problem—and a visit to Yomi.

Brace Yourselves, AI Is Coming to the Orthodontist’s Office

Your Dentist, and Robot, Will See You Now
0
share this