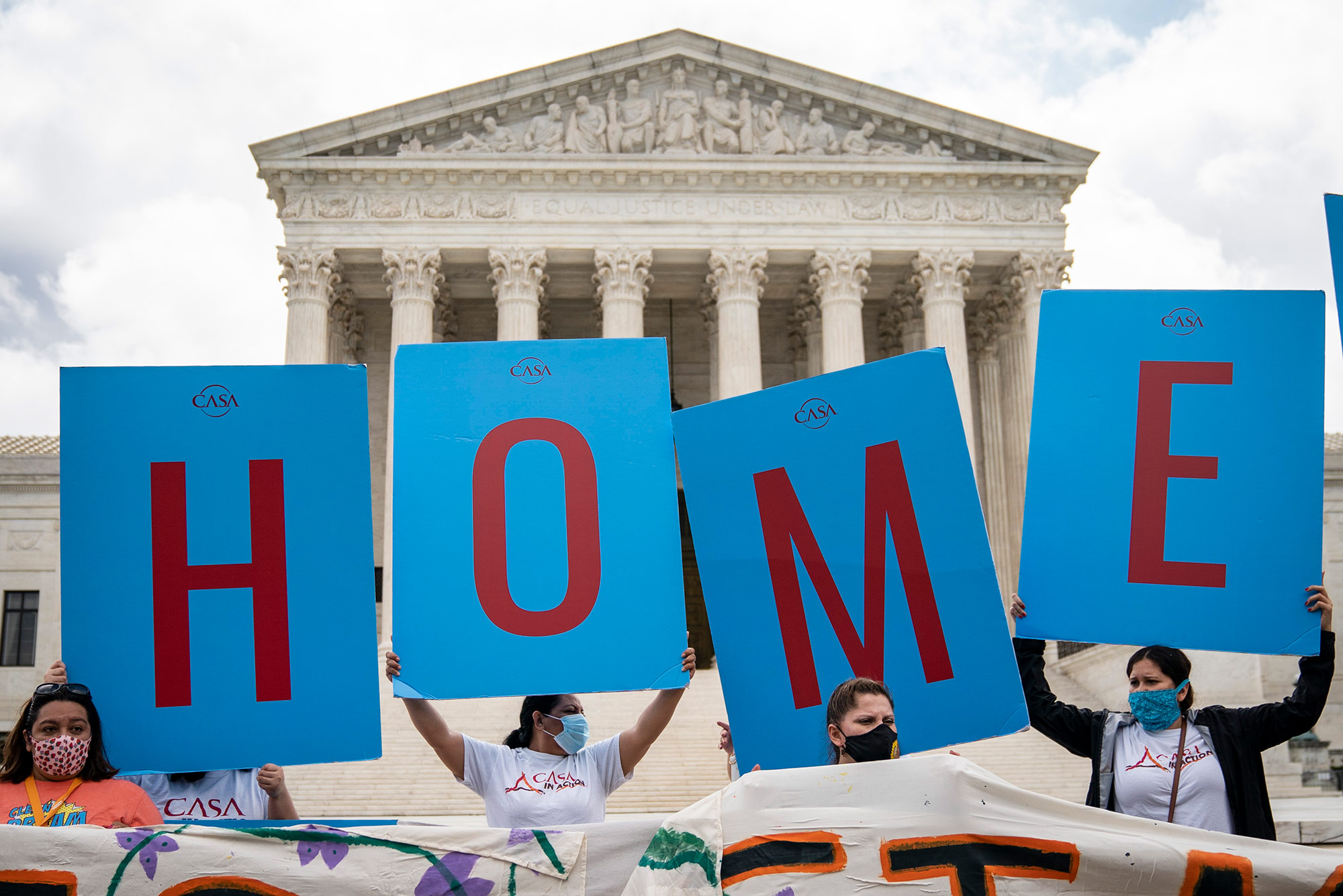 Some 700,000 so-called Dreamers can stay in the United States for now after a surprising 5-4 ruling by the US Supreme Court. Photo by Drew Angerer/Getty Images

“The fight is not over,” says LAW’s Sarah Sherman-Stokes, for 700,000 young immigrants, or Dreamers, allowed to stay in the United States

The 700,000 young immigrants known as Dreamers can stay in the United States—at least for now—thanks to Thursday’s US Supreme Court ruling blocking the Trump administration from ending a program that protected them from deportation.

The Trump administration announced in 2017 its plan to end the Deferred Action for Childhood Arrivals (DACA) program, launched under President Barack Obama as a stopgap measure to protect young immigrants who were brought to this country as children and did not have citizenship or legal residency status.

The 5-4 Supreme Court ruling on June 18 dealt a blow to Trump, who had campaigned in 2016 on a number of tough-on-immigration pledges, promising to “immediately terminate” DACA.

BU Today asked immigration attorney Sarah Sherman-Stokes, a School of Law lecturer and clinical instructor and associate director of BU’s Immigrants’ Rights and Human Trafficking Program, to explain the ruling and its implications.

BU Today: What does this ruling mean—and specifically, what does it mean for your clients?

Sarah Sherman-Stokes: The Supreme Court’s decision today in Department of Homeland Security v. Regents of the University of California is a major victory for more than 700,000 young people and their families who rely on Deferred Action for Childhood Arrivals (DACA). They can breathe a sigh of relief knowing that their DACA status continues for now—allowing them access to work authorization, and the benefits that come with it, as well as reprieve from deportation.

Sarah Sherman-Stokes: That said, the 5-4 victory does not mean that five members of the court agree that DACA is constitutional. Rather, only that five members of the court disagree with the way the government sought to end the program. In particular, these five members of the court—Roberts, Kagan, Sotomayor, Ginsburg, and Breyer—agreed that the Trump administration failed to provide an adequate reason for why they ended the program and that their actions in ending the program were “arbitrary and capricious.” Still, this is a victory—for my clients, who are professors, college students, and future dentists and doctors, for all Dreamers, for the rule of law, and for justice. This decision is also a blow to the Trump administration, whose ham-handed attempts to dismantle vital immigration protections are, thankfully, being both questioned and rejected.

BU Today: Who are the people who helped make this victory happen?

Sarah Sherman-Stokes: As a lawyer and law professor, it is tempting to congratulate only the legal profession for their excellent briefing, skilled advocacy, and zealous lawyering. And indeed, all of those things are true. The work of longtime Supreme Court litigator and former Solicitor General Ted Olson, his DACA-mented cocounsel Luis Cortes Romero, and their incredibly formidable legal team should be highly commended.

But this is truly a victory for the incredibly courageous young people who have worked tirelessly for this. The DREAM Act was first introduced in 2001. On May 17, 2010, nine years later, four undocumented students occupied the Arizona office of the late Senator John McCain (R-Ariz.). Following this were a long line of occupations, hunger strikes, demonstrations, and marches demanding protection for hundreds of thousands of young people who have grown up here, worked here, learned here, and served this country. The activism, direct action, and unrelenting organizing and advocacy has galvanized this country, and it is to these young people that we owe this victory.

BU Today: Does this end the battle over DACA and Dreamers—and what is the next step for Dreamers?

Sarah Sherman-Stokes: No. This is a huge victory—but the fight to protect Dreamers is not over. DACA is not a permanent solution, nor is it a path to permanent residency or citizenship. Dreamers are vital members of our community—they are doctors, teachers, essential workers; our friends, family members, and neighbors. They need—and deserve—stability. While today’s decision is cause for celebration, tomorrow the fight continues as it is likely that the Trump administration may seek other ways to end DACA.

BU Today: Were you surprised by the ruling?

Sarah Sherman-Stokes: Yes—and no. On one hand, I’m surprised, because, like many, I assumed that the conservatives on the court would side together. On the other hand, the way the Trump administration failed so miserably to follow basic administrative law rules in attempting to end this program makes this an obvious victory.

In short, the administration did not follow the procedures laid out by the Administrative Procedure Act (APA) that the government must undertake when seeking to end a program such as DACA. And that’s a problem in particular because more than 700,000 young people have relied on this status. What’s more, the advocacy, organizing, and activism that surrounds Dreamers and DACA, I think, have truly made a difference. That kind of advocacy, organizing, and activism gives me hope for today’s Black Lives Matters protests, and the change they will hopefully herald.

There is 1 comment on Will Supreme Court Ruling Finally End DACA Debate?