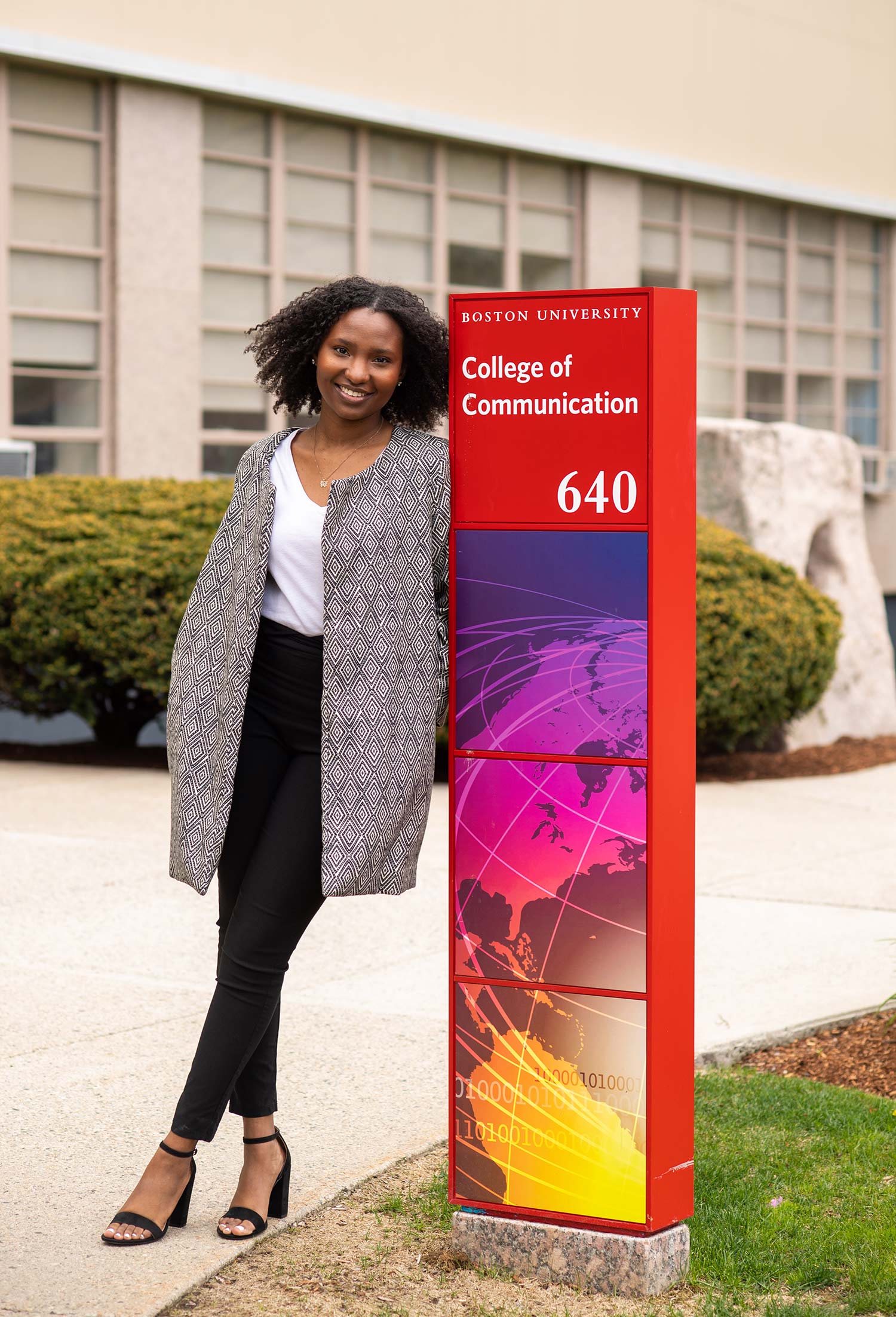 “We will get through this,” says Shadae Leslie (COM’20), a soon-to-be-graduate on the job hunt. Photo by Cydney Scott

Plus, five tips for job searches from BU Center for Career Development

Shadae Leslie lost her part-time job at a Brookline, Mass., real estate firm recently when business dried up because of the spreading coronavirus. The news came just as she and other seniors were asked to leave the Boston University campus and told that college classes were moving online.

As if that was not bad enough, now she’s job-hunting as unemployment soars to record highs and an unofficial recession is underway—the second of her young lifetime. In 2008, the Great Recession forced her father’s Bronx barber shop to close for good when business waned.

“I definitely have my moments where I freak out a bit,” says Leslie (COM’20), a public relations major. “But I remind myself of the time we’re in, and that I’m not the only one going through this. I’m fortunate to have a family to go back to, and that I’m healthy. I’m focusing on the positive.”

Staying positive is a major accomplishment in a year that’s fizzled spectacularly for most college students. For seniors in particular, the novel coronavirus turned the world upside down just as they were poised to graduate into what had been a soaring, job-rich economy for new grads. Now seniors, and students in general, are reckoning with rescinded job and internship offers, hiring freezes, empty job fairs, and increased competition for open positions.

How bad is it? We’ll keep it brief. The United States lost 20.5 million jobs in April, the worst loss since the Great Depression, as nearly every sector of the economy faltered. Unemployment rose to 14.7 percent nationally, as employers like Uber, Airbnb, and (in the Boston area) TripAdvisor and Wayfair shed thousands of positions. For undergraduates, internships that are often the gateway to full-time employment also dried up, as places like Yelp and Disney suspended their programs.

The pandemic has decimated the travel industry in particular, with airlines and hotels cutting millions of jobs, and occupancy rates plummeting as cruise ships, amusement parks, and all nonessential business travel ceased.

Faculty like Leora Lanz (COM’87), a School of Hospitality Administration lecturer and chair of the graduate program, faced with advising students on how to handle the meltdown, say they may have to expand the scope of the jobs they’re considering and embrace the skills they need as the coronavirus accelerates industry changes that were already underway.

Will hotels, she asks, further embrace technology by requiring guests to check in by phone and use their phone as a room key? Will robots clean rooms? How will the restaurants that survive the pandemic, as well as new ones, operate differently or incorporate touchless technologies? New graduates, digital natives with cutting-edge skills, will be prime players in these shifts.

“It’s just a matter of navigating it and seeing what it looks like on the other side,” Lanz says. “We’ve got to pick ourselves up, we have to. Is there fear? Is it nerve-wracking for everybody? Yes—we’ve not seen anything like this before. But we have to think positively to get through this.”

There are also resources for enterprising students. BU’s Center for Career Development (CCD) now offers its services online for students living at home, including access to one-on-one appointments by video for students seeking tailored advice. The team is also running one or two virtual workshops daily for job hunters on social media. (See below for their tips for job seekers.)

And BU’s Alumni & Friends office is also offering online resources for job seekers and a BU alumni LinkedIn page, as well as a Career Advisory Network to keep the University’s vast network connected.

That’s all helpful to grads like Sarah Bickford (CAS’20), who was applying for jobs that seemed all but guaranteed a few months ago and now finds herself facing steeper competition for a role with national service program AmeriCorps. A psychology major, she is waiting to hear whether she has been accepted into one of its teaching and mentoring programs, but says she has new concerns that she won’t get a spot.

She worries every time she opens her email that she’ll face a rejection that will force her to move back with her parents and two teenage brothers. She’s also coping with being unable to give some of her friends “that last hug” or see her grandparents, who never went to college, attend her postponed spring graduation, although she rarely talks about it, she says, because “it sounds frivolous” when people are dying in a pandemic.

Bickford says a CCD counselor has offered some comfort with the reminder that even the best-planned job searches rarely follow a straight path. Instead, she’s focused her search on her interests as a psychology major and working with young people.

“I think about what would make me come alive, what would I enjoy. It’s the universal struggle for students and new graduates,” she says. “I don’t know what’s going to happen, but I feel grateful that I have an idea of what I’m interested in.”

Although there’s much research showing that college graduates who have the bad luck to graduate during a recession earn less for a decade or more than their peers who graduate during better economic times, some researchers have found actual benefits to a downtime economy. An Emory University researcher found that recession graduates were happier in their jobs, even if they were lower-paying jobs, both earlier and later in their careers, because unlike those who graduated in a good economy, they didn’t ruminate about unfollowed paths or what might have been. Instead they focused on gratitude for what they had.

Wallis Perry (COM’20) is using her newfound free time to boost up her portfolio for advertising and copywriting jobs, hoping that it will make her a better job candidate once the immediate coronavirus crisis fades. It’s definitely not easy to be patient and put life, an apartment, and her independence on hold, she says from her childhood bedroom at her parents’ house in Connecticut.

She was also having the time of her life during senior year, having forged deep friendships.

Haley Cerretani (Sargent’20), a health sciences major with a Spanish minor, landed a coveted internship at Massachusetts General Hospital last year working with cancer patients, a role that led her to apply for a permanent position at the hospital shortly before the pandemic caused a hiring freeze. Now everything’s in limbo, she says, including the apartment she had picked.

“At first, I was a little upset about it—I felt like I had my life planned out,” she says. “But now I’m grateful for how it’s all played out thus far. It gave me a different perspective. I reorganized and realized you have to have faith. There’s only so much you can control.”

She sublets an apartment with another student in Boston’s Mission Hill neighborhood, volunteers with the city of Boston health department, and is applying for other positions as she waits for word.

Many graduating students were in fifth grade when the 2008 recession caused a crash and massive joblessness. And those whose families were affected by the havoc it unleashed may also understand the uncertain nature of work—and life.

Bickford, who hopes to land the AmeriCorps job, says the last recession upended her family’s life in Florida at the time. Her parents needed to move so her father could attend graduate school, but it was difficult to sell their house. And they saw many in friends’ families lose their jobs or homes in a state hit hard by unemployment and foreclosures.

“I’m begrudgingly accepting that this is what’s happening for a little bit,” Bickford says.

Leslie, whose father lost his Bronx barber shop in the last recession, says she also expects bumps in the road, if not roadblocks. She says she’s still going to follow her dream of moving to Manhattan and pursuing a career in real estate finance. The first person in her family to graduate from college, she’s got her degree, her health, and time to carve out a plan, she says.

Leslie has remained on BU’s campus as a resident assistant. Her mother, an immigrant from Jamaica, will pick her up this week and bring her home to live in Connecticut. They’ll take photos of her in her cap and gown before they leave.

“It might be unclear how now,” she says, “but we will get through this.”

Job Tips from the BU Center for Career Development

Employers will likely be receiving lots of résumés. Résumé screening software filters out all but the most pertinent résumés, so make sure your transferrable and relevant skills are front and center. Use VMock, BU’s real-time résumé improvement app, to optimize your résumé for screening and make sure your skills shine. While you are job-hunting, you can also use the time to build new skills; look for virtual freelance projects or contact local businesses and nonprofits to see if you can volunteer virtually.

In many ways, a virtual interview is much like an in-person interview; you should wear business formal attire, research and prepare questions in advance, and present yourself with the same care and professionalism as you would in person. BU students have access through Handshake to Big Interview, a tool that lets you practice interview questions and record your answers for feedback and improvement.

To make the most of your job or internship search, it helps to be focused on your preferred industry, the city or state you’d like to work in, and the size of organization you’d like to join. If you can’t find a perfect internship or job in your chosen field, don’t give up. Consider alternatives that will help you develop skills or gain experience that’s relevant to your long-term career goals. One such alternative is an unpaid internship; the Yawkey Nonprofit Internship Program can help you afford it. Fill out your Handshake profile to receive job and internship listings that are most relevant for you. We are approving new employers and listings in Handshake every day from employers seeking BU talent.

Simply put, we’re all home right now—students as well as professionals. Now is a great time to research potential mentors and begin making connections that could lead to a unique opportunity down the road. To get started, look on the Career Advisory Network, where BU alumni in a variety of fields have volunteered to share expertise and industry insight with students like you. You can also find networking opportunities on LinkedIn and request informational interviews with professionals in your desired field.

Talk to the experts. This is a tough and uncertain time, and many students are unsure how all of these changes will impact their career plans. The CCD has supported BU students and alumni in every type of economy, and we’re ready to help with guidance, helpful resources, and search strategies. RSVP on Handshake to an upcoming virtual workshop or make an appointment to meet virtually with a career counselor. We have extended hours to make it easier than ever to work with us.