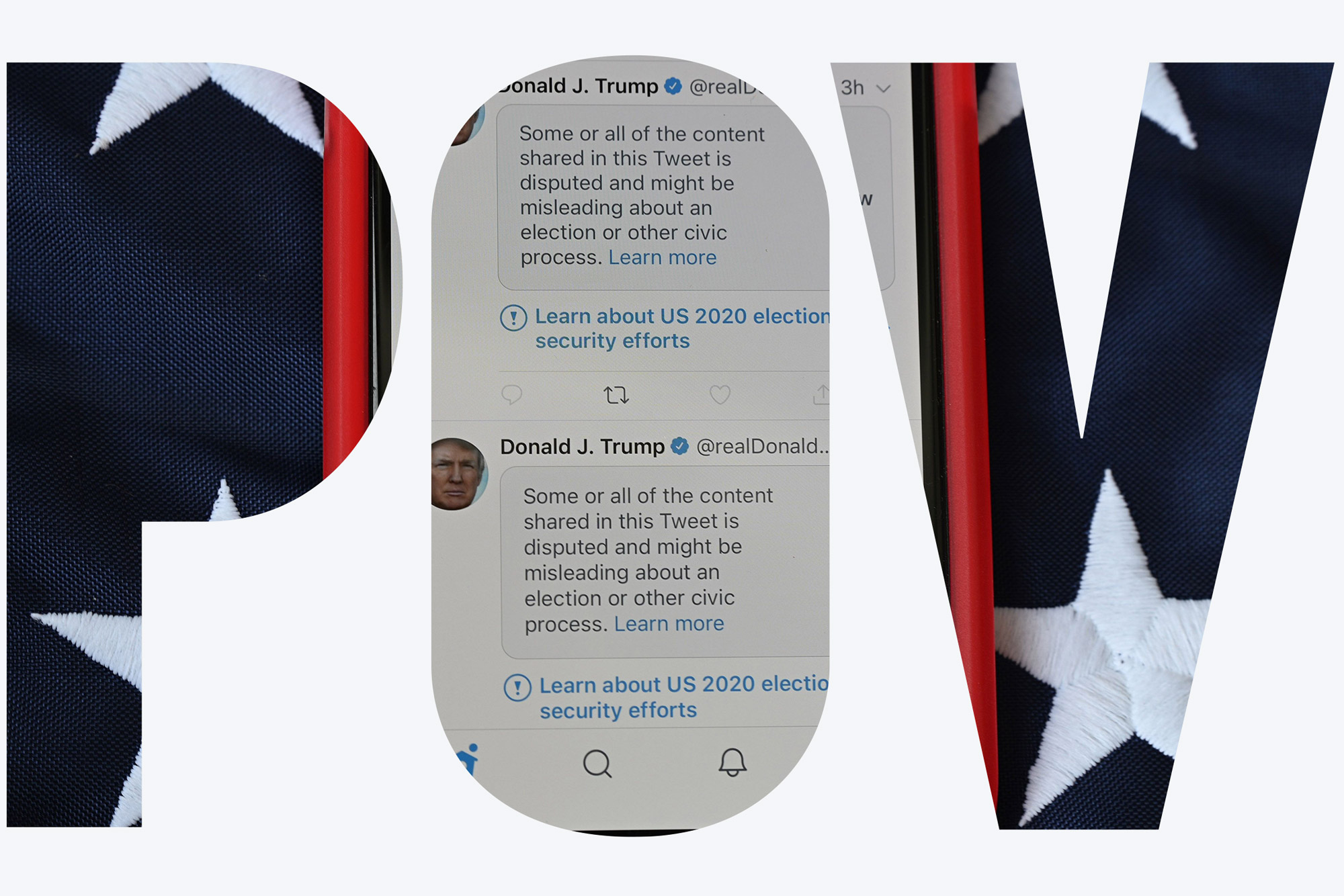 “STOP THE FRAUD!” President Trump tweeted November 5, the Thursday after the election. Twitter framed the tweet with warnings. Before the tweet was a label saying, “Some or all of the content shared in this tweet is disputed and might be misleading about an election or other civic process.” After, it offered a link to click to “learn about U.S. 2020 election security efforts.” As vote counting continued, Twitter flagged four such tweets in a 24-hour span.

For months, Twitter has been identifying and contextualizing Trump’s misleading tweets, aiming to stop misinformation from spreading on its platform. Such warnings may have been a public relations victory for Twitter and for the other social media companies that took similar steps in 2020, at least among some audiences. But did these efforts affect public opinion about the issue itself?

We wanted to know whether fact-checking social media posts works to correct audience perceptions. Or does it backfire—potentially strengthening Americans’ beliefs in false or misleading claims?

Our research suggests that corrections to presidential tweets may not work as intended—but instead further polarize Democrats and Republicans.

Scholars have studied when fact-checking political misinformation effectively changes what citizens believe. Sometimes, research finds that such rebuttals can backfire; individuals confronted with contrary views double down on their beliefs. Other research suggests that correction backfires are relatively rare. But scholars have never investigated the effects of labeling misinformation when the source is the president of the United States.

To study this, we conducted a survey experiment in May, very shortly after Twitter issued its first rebuttal of a presidential tweet. Underneath two Trump tweets baselessly claiming that mail-in ballots were “substantially fraudulent,” Twitter stamped,“Get the facts about mail-in ballots.” The link took readers to a full fact-check, with information rebutting Trump’s claim.

We recruited a sample of 1,003 adult Americans through the online marketplace Lucid, which uses quota sampling to produce samples that reflect the demographics of the US population as a whole.

We asked respondents whether they believed mail-in ballots were often fraudulent. Before doing so, we randomly assigned them to several groups. The first group took the survey without reading any additional information. The second group read the president’s tweet. The third read the tweet, as well as Twitter’s “get the facts” nudge, gently suggesting that Trump’s claims were inaccurate. The final group saw the tweet, the nudge, and the full fact-check with rebutting information.

In the group that read the tweet alone, Democrats and Republicans responded differently. Compared with the group that read nothing, Republicans became more likely to believe mail ballot fraud was common and Democrats became slightly less likely to believe the claim. Moreover, both the more modest nudge and the full rebuttal polarized partisan responses further: Democrats became less likely, and Republicans more likely, to believe in voter mail fraud. In the real world, this polarizing effect could be even stronger if publicity about Twitter’s fact-checking attracts more readers to the tweet than would have seen it without the correction.

Of course, our study examined only a single case—by definition, as this was the first time that Twitter had fact-checked a presidential tweet. It would be interesting to examine whether such rebuttals always polarize opinion, or whether that varies in different circumstances.

Throughout the waves of coronavirus misinformation and the 2020 presidential election, social media platforms have been buffeted by conflicting pressures. On the one hand, Democrats have pressured them to crack down on misinformation on their platforms. And, on the other hand, Republicans have charged that the social media platforms have intervened too aggressively and played favorites.

Those two camps showed up on Capitol Hill last month when the chief executives of Twitter, Jack Dorsey, and of Facebook, Mark Zuckerberg, answered questions in a Senate Judiciary Committee hearing titled Breaking the News: Censorship, Suppression, and the 2020 Election. Senator Marsha Blackburn (R-Tenn.) charged that the platforms “have used this power to silence conservatives,” while Senator Dianne Feinstein (D-Calif.) asked whether Twitter warnings were even effective. Democrats think that these platforms have not moderated content thoroughly enough. Republicans charge that platforms are censoring conservative thought.

Our research suggests that the parties have inflated these corrections’ influence on public opinion. Rather than swaying public opinion, corrections to Trump’s posts, at least, may simply polarize the public further.

This column was originally published in The Monkey Cage blog at the Washington Post on November 25. Reprinted with permission.

There are 2 comments on POV: When Twitter Fact-Checks Trump’s Tweets, It Polarizes Americans Even More