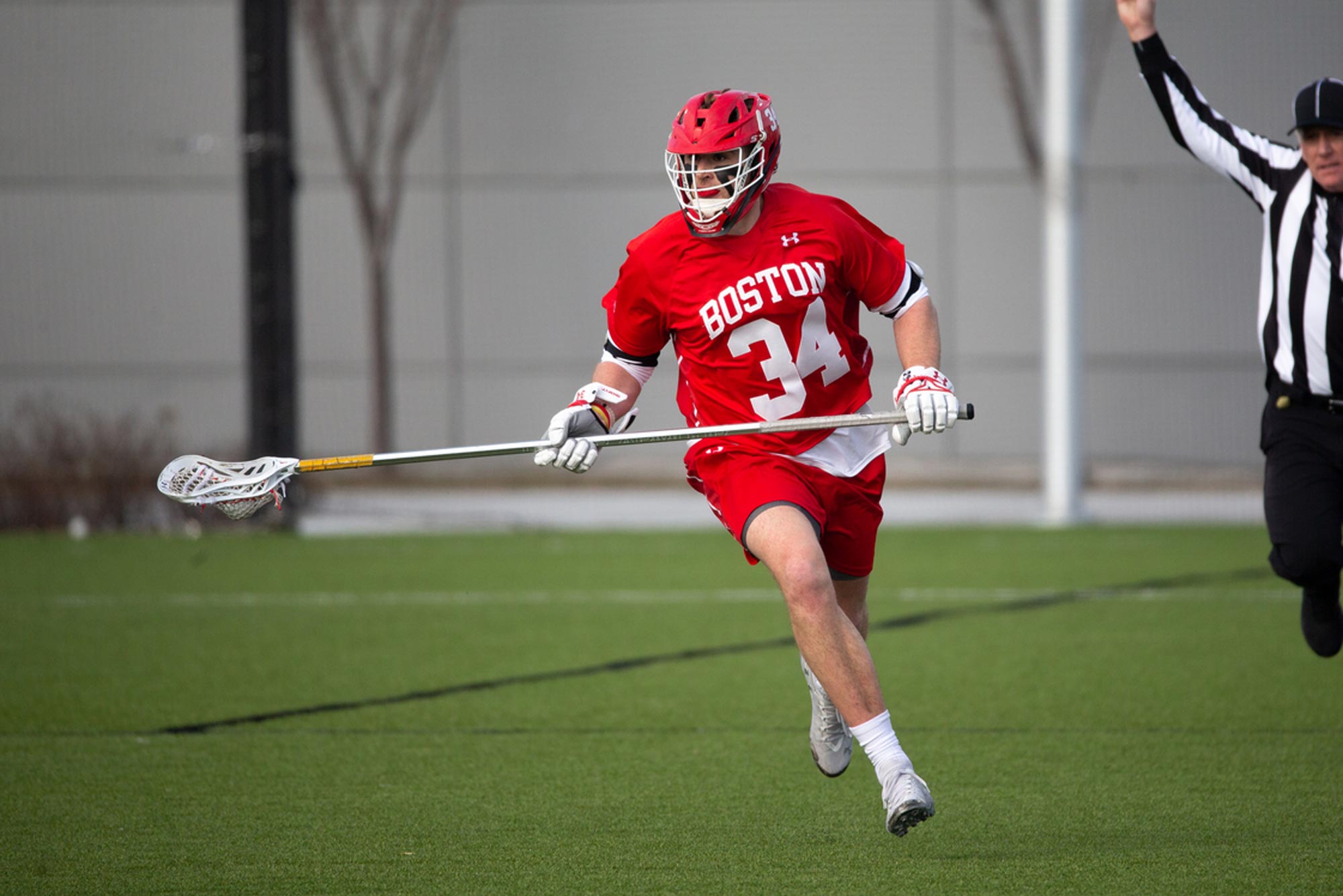 Chase Levesque (Questrom’20), cocaptain of the men’s lacrosse team, is a two-time Patriot League Defender of the Week.

Head coach Ryan Polley, who has led the program since it began seven years ago, says the departure of those two players has motivated the team.

“Considering everything that happened with the Gray transfer and graduation and going from a team on paper that probably would’ve been picked one or two in the Patriot League to now being picked four [in the preseason poll] and kind of being discounted,” Polley says, “there are a lot of players out there that are hungry, and wanting to prove that they’re ready to take this program to the next level.”

“Disrespectful for how we feel as a locker room and as a team,” says Reece Eddy (Questrom’20) of that poll. “We definitely have a big chip on our shoulders.”

Eddy, a long stick midfielder who compiled a program-record 34 caused turnovers last season after transferring from Canisius, is expected to again play a pivotal role.

“You quickly learn: the culture here is something that you can’t replicate anywhere else,” Eddy says.

BU leads the Patriot League in caused turnovers, a testament to its strong defensive unit.

“As we continue to play with each other, it’s always been just working off each other’s strengths and having the right opportunities to make plays,” Levesque says. “One of our keys is to always come out with toughness and this mentality that we’re never the favorite, which we never really are.”

On the offensive end, the team is young. Vince D’Alto (CAS’23) and Louis Perfetto (CAS’23), the team’s leading scorers, are new to the team, with Timmy Ley (CGS’20) and Jake Cates (CGS’20) the returning leading scorers. D’Alto and Perfetto are members of the nation’s fifth-best recruiting class and the best in the Patriot League, says Inside Lacrosse . This year’s Terrier freshmen include eight four-star recruits, who are already making an impact.

One of our keys is to always come out with toughness and this mentality that we’re never the favorite, which we never really are.

“In terms of the offensive players we lost to graduation, we have guys that are ready to step into roles and be big producers for us,” Levesque says.

But it’s the senior leaders on the defensive end of the field who will guide the Terrier men in finding their footing during the 2020 campaign.

“When games are played and you need a stop, it’s great to know you have guys with a lot of experience, who have been in those big game situations,” Polley says. “We’ll certainly lean on them to be the backbone of this team.”