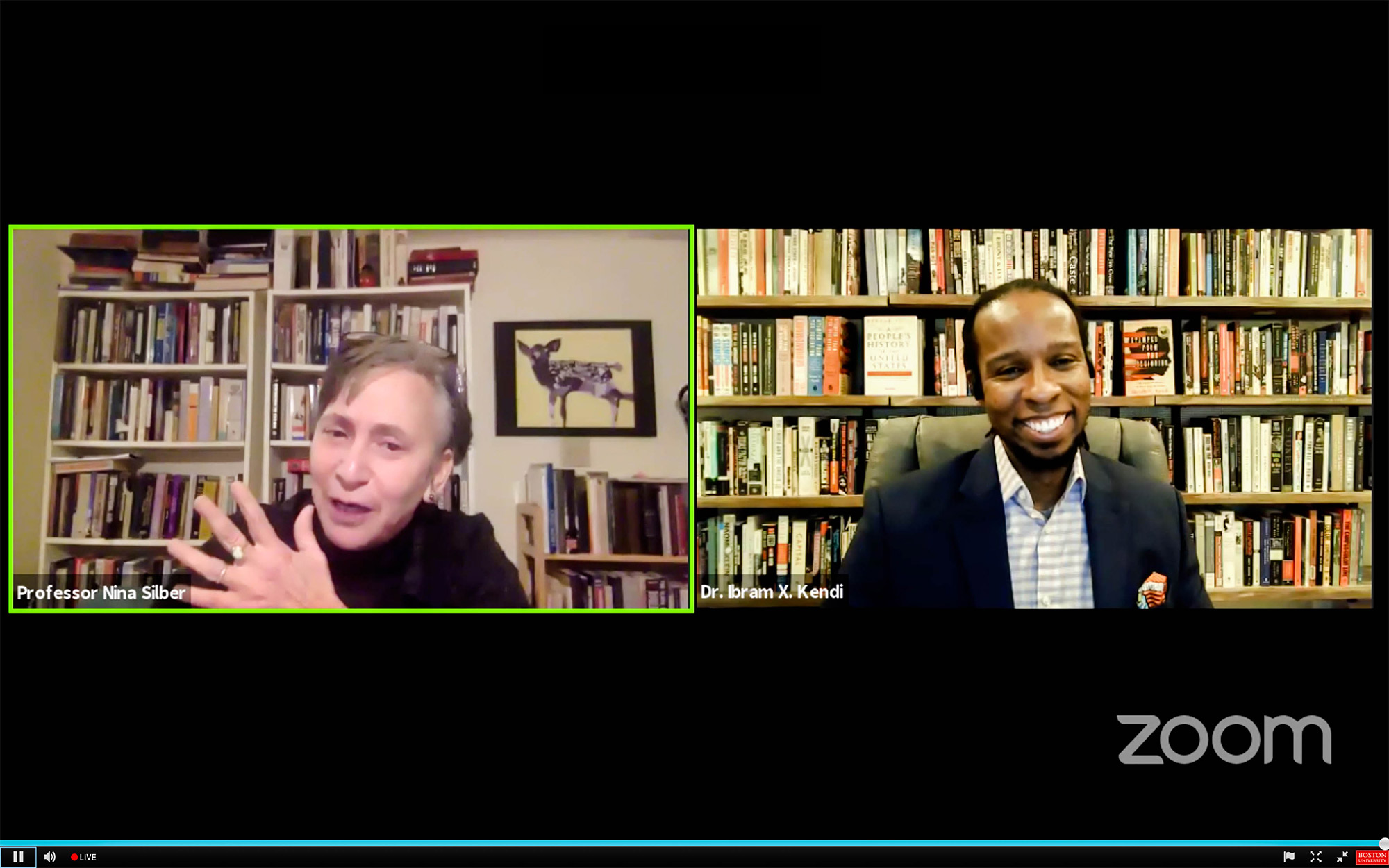 Nina Silber (left) and BU Center for Antiracist Research founding director Ibram X. Kendi discuss the history of racism in America and how racism can be fought during the annual Howard Zinn Memorial Lecture Monday. The lecture series is named for the late acclaimed author, historian, and civil rights and antiwar activist who taught at BU from 1964 to 1988. Photo by Jackie Ricciardi

“If You Do Nothing, Racial Inequality Persists”—Ibram X. Kendi Honors Howard Zinn in Annual Zinn Lecture

Amid the national movement for racial equality, antiracist scholar Ibram X. Kendi said, he is inspired by William Lloyd Garrison and other Boston abolitionists who began calling for the immediate emancipation of enslaved people in the 1830s. “That was considered radical because the main process of racial reform was gradual emancipation,” Kendi, the founding director of Boston University’s Center for Antiracist Research, said in addressing a virtual audience during BU’s annual Howard Zinn Memorial Lecture Monday evening.

The Zinn lecture is given each year by a person who embodies the progressive values of the late historian, who taught in BU’s political science department for 24 years and was a civil rights activist, a hero of the political left, and the author of the best-selling A People’s History of the United States, which shaped the way generations of high school and college students—including the young Kendi—viewed American history. Zinn died in 2010.

Kendi is the author of several books, including the National Book Award–winning Stamped from the Beginning: The Definitive History of Racist Ideas, and the best-selling How to Be an Antiracist, as well as a contributor to The Atlantic and a sought-after speaker at colleges and universities across the country. This year, he became one of the most prominent voices of the growing antiracist movement, and like Zinn, he is a public intellectual and popular cultural figure whose work challenges the conventional view of American history.

“Howard Zinn is one of the reasons why I decided to come to BU,” Kendi told the audience at the beginning of Monday’s webinar event, “to be able to walk on the same campus and think in the places he did and to activate people in the way he did.”

This year’s lecture took the form of a conversation, with Nina Silber a CAS professor of American history, an expert on the Civil War, the South, and women’s history, asking Kendi questions about his scholarly work, his views on historical figures like Garrison, and how his antiracism connects with Zinn’s stance that one cannot be passive, one has to take a stand against racial inequality and other forms of injustice, as exemplified by the title of the late BU professor’s 1994 memoir You Can’t Be Neutral on a Moving Train: A Personal History of Our Times.

“From the standpoint of Zinn, when the moving train is the status quo of racial inequality, if you do nothing, racial inequality persists,” Kendi said. “If you do nothing in the face of Jim Crow segregation, it’s going to persist. The moving train is incarceration, is police violence disproportionately against Black and brown people. And so to do nothing, what’s going to happen, the police violence and incarceration is going to persist.

“I’m sure you know from your work on the Civil War that slaveholders wanted people to do nothing,” Kendi said to Silber, referring to her latest book, This War Ain’t Over: Fighting the Civil War in New Deal America (University of North Carolina Press, 2018). “Just act like the train ain’t moving because that’s how slavery is going to last. So we are either challenging racism by striving to be antiracist or we are upholding racism, whether through doing nothing or by actively pushing racist policies. So there is no neutrality in the struggle against racism.”

The annual Howard Zinn Lecture series is supported by Alex H. MacDonald (CAS’72), a former student of Zinn’s, and his late wife, Maureen A. Strafford (MED’76).

“If You Do Nothing, Racial Inequality Persists”—Ibram X. Kendi Honors Howard Zinn in Annual Zinn Lecture

There are 4 comments on “If You Do Nothing, Racial Inequality Persists”—Ibram X. Kendi Honors Howard Zinn in Annual Zinn Lecture

“If You Do Nothing, Racial Inequality Persists”—Ibram X. Kendi Honors Howard Zinn in Annual Zinn Lecture
4
share this