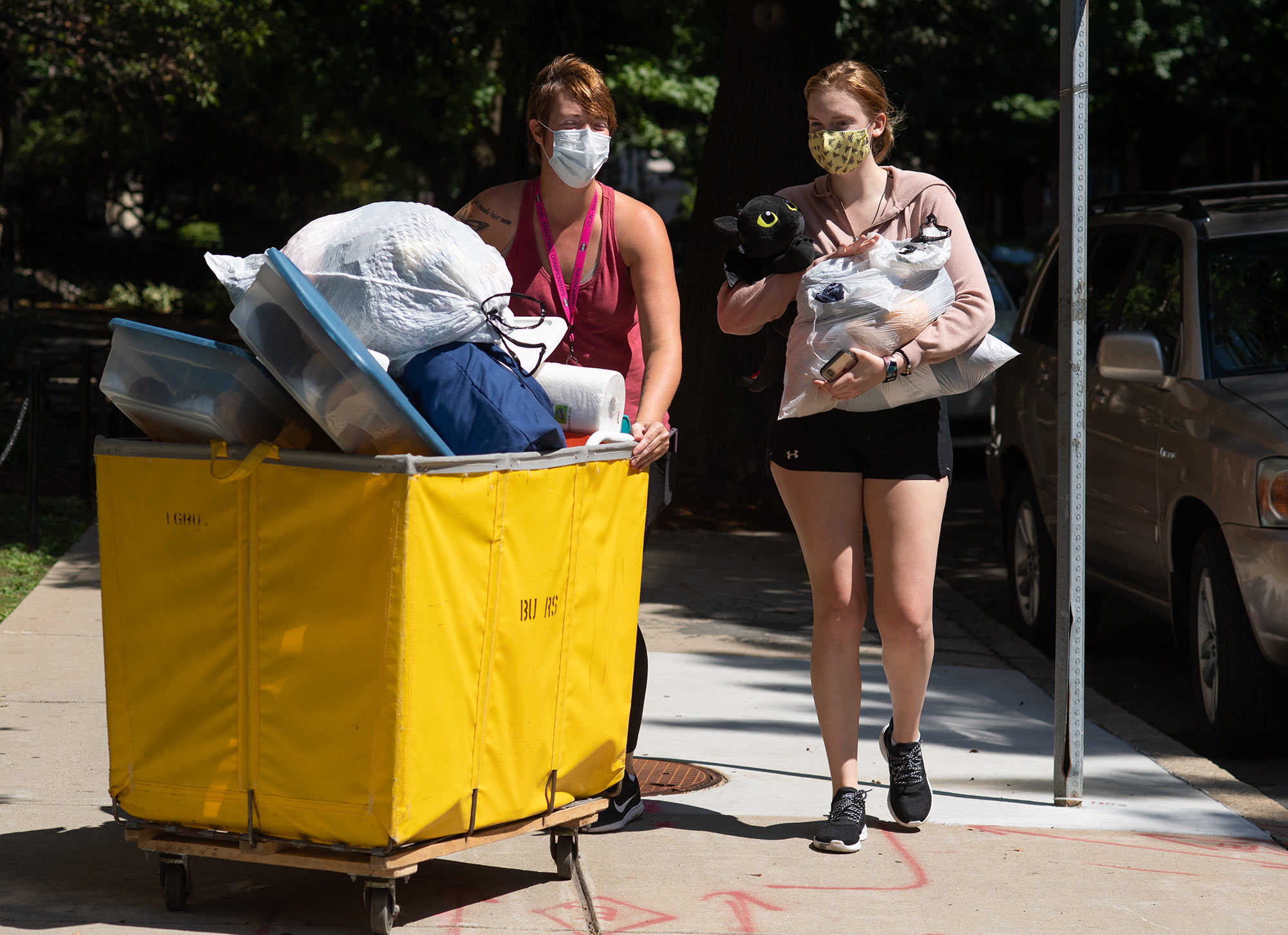 Elina Brooks (ENG’24) (right) moved into Kilachand Hall with the help of her mom, M. J. Brooks, on August 17. The two traveled from Annapolis, Md. Photo by Cydney Scott

Students who have already arrived on campus during BU’s longer-than-usual 2020 Move-In have mostly positive things to say about their return to residential life. They do admit to being a bit leery about the future of the fall semester, however, given that many schools around the country have pulled back on their plans to reopen and are now instead opting for fully online teaching and learning.

In the last two weeks, the University of North Carolina at Chapel Hill and the University of Notre Dame moved to (at least temporary) remote instruction, after a large number of students at each school tested positive for coronavirus, largely linked to parties and other social gatherings.

That has not been a serious issue at BU, according to Robert Molloy, BU Police Department deputy chief, when asked about this past weekend’s activity. “Move-in went remarkably well thanks to all the planning that took place in advance,” he says. “There were no complaints and everyone seemed to be in a good mood. I’m also not aware nor did we receive any phone calls about activity in terms of parties at BU or out in Allston. So, so far, so good.”

And the numbers bear that out.  According to the BU COVID-19 Testing Data Dashboard’s data through August 23, the University had received 14,965 test results from its five testing sites and 14,780 were negative (98.76 percent), 25 positive (0.17 percent), and 160 invalid (find invalid results explained here). The average time for a coronavirus test collection swab to be processed was 23.7 hours. At the testing center inside the 808 Gallery at 808 Comm Ave, where this BU Today reporter was tested Friday morning, the process was orderly and took only about five minutes. Results were turned around in less than a day.

David Zamojski, assistant dean of students and director of residence life, says BU residence halls and apartments have also been operating without issue. “And during a time when RAs cannot bring all their residents together,” Zamojski says, resident assistants are getting creative about how to communicate info with their students. RAs in high-rises, such as Warren Towers and West Campus, typically give their residents a building tour. Since that can’t happen this fall, Brianna Connor (Sargent’21), an RA in The Towers, produced a video aiming to accomplish the same goal.

Outside Warren Towers on Friday morning, new student Kya Mehlman (COM’24) was waiting for a friend so the two could go on a run together. Mehlman said her move-in proceeded smoothly, and that she had already received the results of her first COVID-19 test (negative, fortunately). She acknowledged feeling a little nervous about starting college amidst the coronavirus pandemic, but felt more confident after talking to friends attending schools who are testing only once every two weeks, if at all.

Erin Shivers (CAS’24), interviewed while sitting on a bench outside The Towers, said she is optimistic about the start of the semester. “BU has a really good testing regimen, so if an outbreak does happen, hopefully they can catch it fast,” the Williamsburg, Va., native said.

The George Sherman Union food hall wasn’t yet open for business at lunchtime Friday, but students were hitting up dining halls and other eateries along Comm Ave. Pavement Coffee House, for instance, has set up a few small tables and chairs on the sidewalk, and several students were dining al fresco.

Paul Riel, associate vice president for auxiliary services, says students are adapting nicely to the new dining hall serving procedures, which include no sit-down eating until the end of Move-In on August 31. “We continue to advise and admonish students to remain vigilant about the six-foot physical distancing protocols,” he says. “The culinary team monitors the food selection, and we continue to make process improvements as more students arrive on campus and utilize the dining halls.”

Vaughan Immerwahr (CAS’21), eating a to-go lunch with a friend on the College of Communication lawn, said, “I’m a little nervous,” when asked how he felt about starting his senior year with such unprecedented protocols in place. “This weekend we’re planning things like walks and bike rides, but it’s difficult to think about what’s going to happen when the winter is here.”

Stephen Fleury (LAW’23), waiting in a three-person line outside of Louie’s Haircuts on Comm Ave, said he wasn’t overly nervous about his own health this semester, but was worried for high-risk classmates or professors who could be affected if they were to contract coronavirus.

West Campus residence halls seemed to have more activity than sleepy Bay State Road and Myles Standish Hall. Right at 1 pm Friday, the start of the day’s second Move-In shift, several cars pulled up and occupants quickly found yellow rolling bins. Standing outside Rich Hall, Liz Somers, mother of Nate Somers (CAS’24), said Move-In had been easy for her son, and that following BU guidelines, she wasn’t planning to reenter the dorm before leaving to go back to New Jersey. She was satisfied with the protocols BU has in place, and said she was receiving frequent updates on the several BU parent Facebook accounts she’s joined. “I urged Nate to take it seriously if he wants to stay,” she said.

Across the way, small groups of friends had gathered to eat lunch on the picnic tables overlooking Nickerson Field, while others made their way down the cement steps to the field to work out. Among them were Mary Regas (CAS’22) and Sebastian Romani (CGS’21, Sargent’23), two friends who met through their jobs at FitRec. Regas said almost everyone she has seen on campus has been wearing a mask, even when walking in public spaces on Comm Ave. The biggest offenders of mask slippage, she said, were parents moving their kids in.

Romani said he’s thrilled to be back, but is nervous that fellow students might become irresponsible as the semester unfolds. “I find that the community at BU is different from others,” he said. “I really feel the majority of kids will work their butts off to make this happen. We’re prioritizing staying on campus.”

As of Monday morning, according to Riel, the University still had 3,977 students planning to check in through August 31.