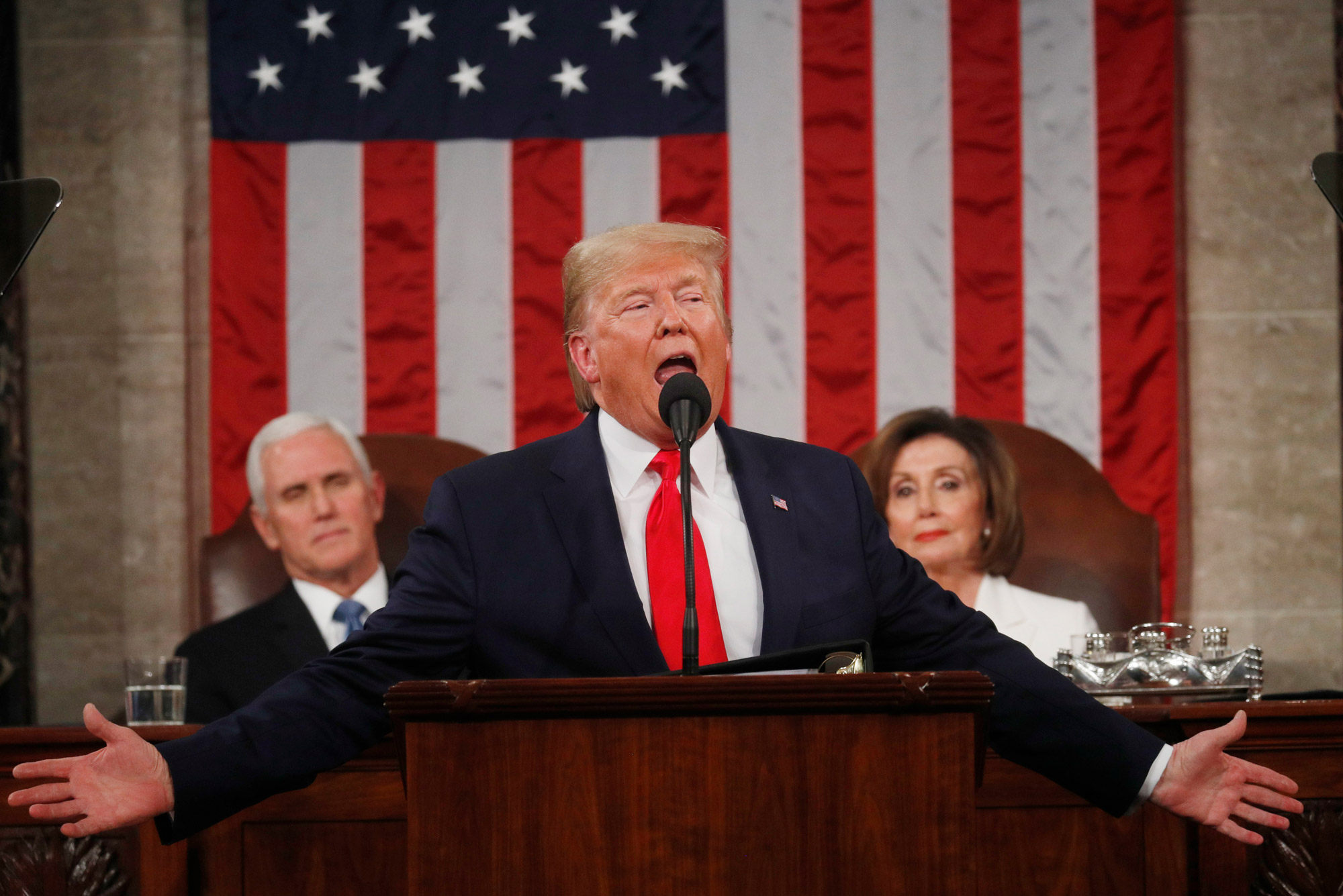 The Senate’s acquittal of Donald Trump gives the president’s powers such latitude that BU historian Thomas Whalen compares it to Octavian Caesar. Photo by Leah Millis/AP

BU Expert: Trump’s Acquittal by US Senate Has Shredded Constitution’s Separation of Powers

CGS prof Thomas Whalen on our “slide toward authoritarianism”

Can President Trump, as he once claimed, “do whatever I want,” under the Constitution? Looks like it, says a BU expert after the US Senate on Wednesday acquitted Trump of two offenses, on votes of 52-48 and 53-47, related to pushing Ukraine to investigate political a rival, former Vice President Joe Biden, by withholding military aid that country needed to fight Russia.

Thomas Whalen, a College of General Studies associate professor of social sciences, says the fabled separation of powers created by the US Constitution was “shredded” by the vote, which was largely along party lines—Senator Mitt Romney (R-Utah) bucked his party to support one impeachment article—and followed a legal defense that Whalen and other critics have called flat-out authoritarian. Alan Dershowitz, a member of Trump’s legal team, told senators, “If a president does something which he believes will help him get elected in the public interest, that cannot be the kind of quid pro quo that results in impeachment.”

Dershowitz says he has been misinterpreted and that he was saying that a president has to commit a crime to be impeached, but as the Washington Post notes, “that view is at odds with the position of mainstream constitutional scholars.” Moreover, the erosion of congressional power in favor of the president’s began decades ago, according to Whalen, who parsed the meaning of Wednesday’s acquittal for BU Today.

BU Today: Trump obviously feels unfettered from the traditional restraints on the office of the presidency. Will his acquittal have lasting effects on future presidents?

Whalen: Absolutely. The constitutional principle of congressional oversight is now shredded. A president, even during an impeachment process, can refuse to produce documents and witnesses based on this expansive view of executive privilege. The whole idea of balance of power that the Founders set up, checks and balances, is completely gone.

Moving forward to, say, building the so-called wall on the Mexican border, Trump can now say, “I don’t have to produce documents or administration members to testify before Congress, because I deem it unnecessary or because I can do whatever the heck I want.”

What happens when you have a different personality in a future president?

History has demonstrated, whether you’re a Democrat or a Republican, if the executive branch is granted greater power, you are not going to give it back. Think back to the last declared war in American history, World War II. Under our constitution, only Congress has the right to declare war. Well, ever since then, we’ve had quite a few wars, but the president has taken the war-making power from Congress. Once the horse is out of the barn, you can’t get it back in.

That’s why I’m so concerned about what just happened during the impeachment process. The only power [Congress] really has left is controlling the purse strings, but we’ve already seen that being weakened during the Trump presidency. When he’s trying to build the wall, he has, without consulting Congress, taken funds from other parts of the budget.

What do you think of the defense team’s arguments?

Dershowitz’s argument made me fall to the floor. It is an authoritarian argument, that every four years we elect the equivalent to a Roman emperor, and no matter what he does, he is above the law as long as he feels that it’s in the national interest. I’m sure Jesse James thought he was doing a good thing by robbing people.

Is this all Trump’s fault?

It’s not. It’s a Democrat and Republican trend. George W. Bush and Barack Obama weren’t shy in exerting executive power, even expanding it—the whole idea of signing statements [written presidential declarations that a president will interpret a just-signed bill in a certain way], where you basically interpret the law not as Congress puts it down, but as the executive branch interprets it. Trump represents a culmination of the imperial presidency. He just sped up the process a bit. Probably to his own surprise, his own party has been so accommodating of him.

You have no sympathy with scholars who say we have too many handcuffs on the president, that we need—

If acquittal will give too much power to the executive branch, what’s the solution? Do you see one?

I don’t. I’m pretty pessimistic. I’ve been thinking of Octavian Caesar of late. He shut down the Roman Republic, but he did it in an ingenious way. He kept all of the institutions in place, like the Senate, but he loaded it with his loyalists, and basically, he became the sole power. He destroyed the Republic, but presented himself as the savior of the Republic. He did it from within. This was after the Roman Civil War, a turbulent time, just as Trump has taken advantage of a very turbulent time in American history.

And that’s how authoritarians rise to power. I think, unfortunately, what we’re seeing here is a slide toward authoritarianism. I hope I’m wrong.

BU Expert: Trump’s Acquittal by US Senate Has Shredded Constitution’s Separation of Powers

There is 1 comment on BU Expert: Trump’s Acquittal by US Senate Has Shredded Constitution’s Separation of Powers

BU Expert: Trump’s Acquittal by US Senate Has Shredded Constitution’s Separation of Powers
1
share this