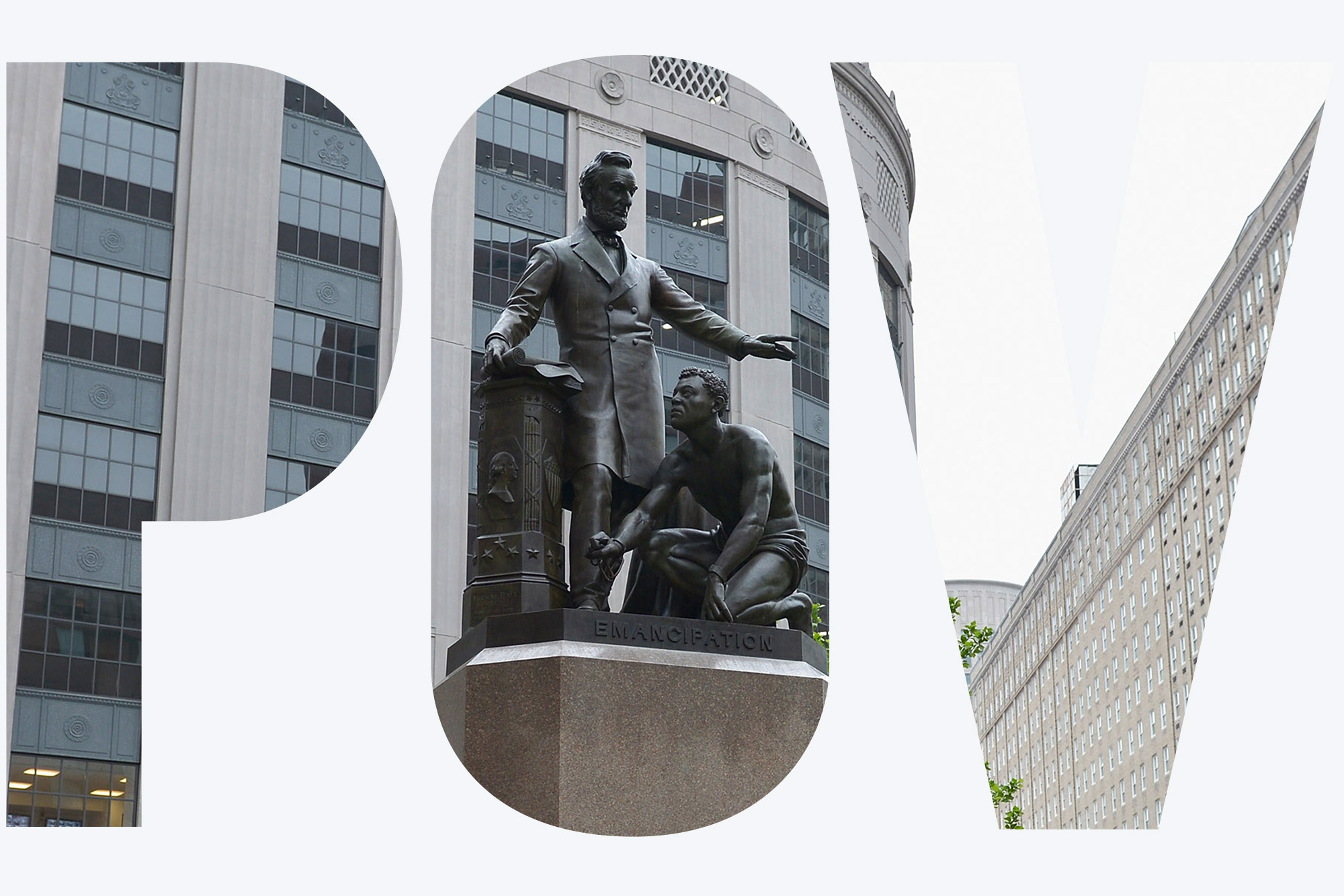 POV: A Monument to White Supremacy Stands in Our Own Backyard

I was a college student here at BU, more than two decades ago, when I first saw Boston’s Emancipation Memorial, in Park Square, near Boston Common. I recall telling friends at the time how racist the statue seemed. But then I forgot about it—until Charlottesville, in 2017, and the national debate over Confederate monuments.

That’s when I came across an image of the original monument, in Washington, D.C., (the one in Boston is an exact replica). Erected in 1876, it depicts a stately Abraham Lincoln standing over an unnamed, barely clothed Black man who is kneeling at his feet. Newly emancipated, the Black man’s shackles have been broken, but its manacles still decorate his wrists. Lincoln’s left arm is extended over the man’s head, ostensibly bestowing freedom upon him. Yet Lincoln’s hand is facing downward as one would when tousling a child’s hair, or worse, petting an animal. Indeed, at just the right angle, that’s exactly as it appears.

A white Lincoln occupying the space above, looking down upon a Black man kneeling below—it’s this power dynamic that caught my eye, and frankly, infuriated me. I began sharing the image with my students and in invited talks as a way to discuss white supremacy, the white savior complex, and the multiheaded beast that is systemic racism.

Now, amid the protests over the police killings of George Floyd, Breonna Taylor, and Rayshard Brooks, the debate over what to do with statues and other monuments that fail to represent our values has been rekindled. Officials are removing Confederate statues in cities across the country. Here in Boston, there is a growing movement to take down the Emancipation Memorial.

It is important to note that while much of the discussion around Confederate statues has centered on the relative merits of the figure being memorialized, the Emancipation Memorial raises different questions. It’s not just about Lincoln, but also about the man at his feet, who has been stripped by the artist of any agency and used as a prop to make Lincoln loom even larger.

After Charlottesville, I began delving into the monument’s history. The original Emancipation Memorial was dedicated in Washington with great fanfare. President Ulysses S. Grant, Supreme Court justices, members of Congress, and foreign dignitaries were among the 25,000 people in attendance—Black and white.

The push for the monument had begun after Lincoln’s assassination in 1865. Charlotte Scott, a freed Black woman, donated the first $5 of her earnings for the memorial. The Western Sanitary Commission in St. Louis, an agency that helped care for newly freed slaves during the war, raised additional funds. The monument would be the first of its kind to be funded solely by freedmen, a tribute to their beloved emancipator. The Sanitary Commission played on this sentiment, issuing a letter inviting all freedmen to contribute to a monument to “Massa Lincoln.”

The $17,000 raised for the memorial was an enormous sum coming from a newly emancipated people. Predictably, none of these donors had a say in the monument’s design. Instead, the all-white Sanitary Commission, led by Rev. William G. Eliot, turned to Massachusetts-born artist Thomas Ball, who had sculpted Boston’s acclaimed George Washington statue. Upon hearing of Lincoln’s death, Ball, who was in Florence at the time, sculpted a smaller version of what would come to be known as Lincoln and a Kneeling Slave.

Eliot and the Sanitary Commission liked the concept, but thought the kneeling figure was too subservient, and asked that changes be made. The “liberty cap” was removed and the figure’s right arm was stretched outward to indicate that he was rising up as a free man.

If you think the final version fails to effectively connote the agency and dignity owed to any human, enslaved or free, then you’re in good company. In the keynote speech he delivered at the dedication, Frederick Douglass remarked that the statue “showed the Negro on his knee when a more manly attitude would have been indicative of freedom.”

The juxtaposition of a kneeling Black man and a towering Lincoln is evocative of the paternalistic sentiment that was typical of whites of the era—slaveholders and abolitionists alike—toward Blacks, free or enslaved. In a bid to add a touch of realism to the original design, Eliot asked Ball to model the facial features after Archer Alexander, a formerly enslaved man who later became Eliot’s servant. That Alexander was enslaved in Missouri, a border slave state exempted from the Emancipation Proclamation, which therefore did not confer freedom upon him, was apparently of no consequence to Eliot or Ball.

It’s not just about Lincoln, but also about the man at his feet, who has been stripped by the artist of any agency and used as a prop to make Lincoln loom even larger.

Erected in 1879, the Boston replica became a great source of pride for city officials, who held an annual ceremony celebrating the statue. The statue was not, however, universally admired. Art historian Chandler Rathfon Post observed in 1921 that the statue’s merits “are obscured by the unfortunate appearance that he [the sculptor] has given to the negro of polishing the President’s boots.”

This notion of the figure as a shoeshiner dated back to 1892, when the Boston Evening Transcript commented that the figure seemed to be “blackening Lincoln’s boots,” and the Evening Telegraph mockingly asked, “Shine, sir?”

In 1982, Boston City Councilman Bruce Bolling, citing concerns from the Black community, questioned whether the statue should be moved or even permanently removed. The Boston Globe wrote at the time: “Some say it appears as if the crouching figure is shining Lincoln’s shoes. They say it makes Lincoln appear to be The Great Patronizer.”

The statue remained—and the criticism from historians and others continued—and now here we are, in 2020. If statues of Robert E. Lee, Jefferson Davis, and John C. Calhoun are clearly contrary to who we are as Americans today, then what to do with Lincoln and the Black man kneeling at his feet in D.C. and Boston?

Bostonians do not need to be reminded of our national reputation—a politically progressive city, yes, but also with an embarrassing racial past and present, from violent resistance to school desegregation in the 1970s to our shameful status as one of the nation’s most racially segregated cities. The last thing we need is a monument to white supremacy.

Boston’s beloved Red Sox have shown that we need not be bound to our past. Then owned by Thomas Yawkey, one of the most racist figures in all of sports, the Red Sox became the last team to sign a black player, in 1959, more than a decade after Jackie Robinson broke baseball’s color barrier. Recognizing this shameful past, team ownership led the charge to rename Yawkey Way, which runs alongside Fenway Park, to Jersey Street.

In announcing its new Take the Lead initiative, encouraging fans to call out those using hateful or racist speech, current team owner John Henry (Hon.’05) noted: ”We, like many Americans, made the mistake of thinking that our region’s and country’s less-than-stellar pasts were firmly behind us, that 21st-century America was becoming a more inclusive nation committed to celebrating diversity. That is not the case.”

Henry is right. Achieving equity and inclusion requires constant vigilance. It also requires us to consider our past, honoring it when appropriate, and moving past it when necessary. As a newcomer, this statue made me suspicious of a city that would put up such an obviously racist monument. It reinforced existing stereotypes of the city and affirmed harmful notions of white benevolence and superiority.

This memorial honors Lincoln, yes, but at whose expense? The nearly naked man at his feet is but a prop used to provide a sense of perspective—Lincoln looming even larger because of the figure below.

I didn’t have the historical knowledge back when I was a college student to say what I do now: the memorial must go.

Boston Mayor Martin Walsh has expressed some interest in recommissioning the work. My hope is that any replacement will not focus on Lincoln, whose story has been well told and whose image is ubiquitous, but rather on those Black people who have struggled for freedom, then and now, and whose perspective and dignified depiction is largely absent in our public spaces.

There are lessons to be learned from this ill-conceived, perhaps unintended tribute to white supremacy. These statues should go where lessons of the past are best learned—in museums, contextualized by educators drawing parallels to modern conceptions of race and existing inequities.

Monuments are markers in time, erected in a present to tell future generations what we value, and perhaps what they should value too. In this nation, long ruled by a white patriarchy, that has meant uplifting slave owners because of their notable contributions, while glossing over their complicated pasts, and ignoring the contributions of women, Blacks, and other marginalized groups.

The emancipation statue honors a true (yet complicated) hero at the direct expense of one such group. We have to be wise enough to discern the difference between this and any other statue of Lincoln. We have to recognize that just because an image is cast in bronze and set upon a granite base by those with the privilege and power to do so, we are not bound to honor it for all of eternity.

This is our opportunity to show who we are as a community, as a generation. The shame of this depiction belongs to those who came before us, but every day that passes makes it more and more our own.

Raul Fernandez (COM’00, Wheelocks’16) is Wheelock College of Education & Human Development associate dean for equity, diversity, and inclusion, and a lecturer; he can be reached at raul@bu.edu.

Read a longer version of this essay, published on Medium in 2017, here.

POV: A Monument to White Supremacy Stands in Our Own Backyard

There are 13 comments on POV: A Monument to White Supremacy Stands in Our Own Backyard

POV: A Monument to White Supremacy Stands in Our Own Backyard
13
share this