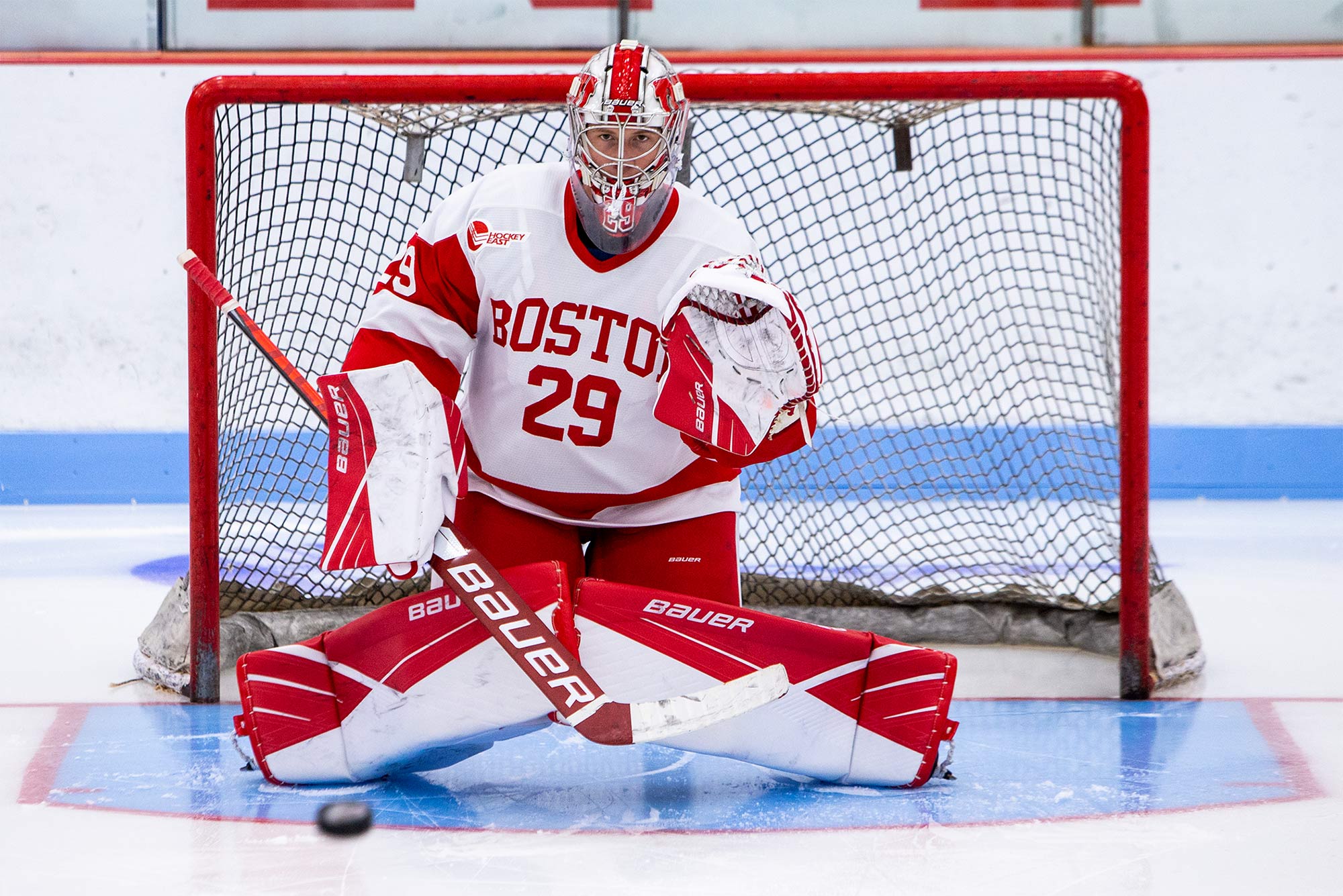 Drew Commesso is eyeing a continuation of his dominance in junior hockey, where he backstopped the USNTDP U18 team throughout the 2019-2020 season. Photo by Matt Wolverton/BU Athletics

Luke Tuch, Drew Commesso, Dylan Peterson talk about the strange excitement of being drafted virtually because of the pandemic

This week’s 2020 NHL Draft was far from normal, but for the three Boston University men’s hockey players who heard their names called, it was as special as they could have hoped.

“For the last couple months, we’ve been waiting for this moment,” Luke Tuch (CAS’24) says. “Today was definitely really weird, but I couldn’t be any happier to share it with the people that helped me along the way.”

Tuch was selected 47th overall by the Montreal Canadiens, just one pick behind teammate Drew Commesso (CAS’24), who went 46th to the Chicago Blackhawks. Dylan Peterson (CAS’24) was taken shortly after them, going 86th to the St. Louis Blues.

All three Terrier freshmen came to BU from the United States National Team Development Program (USNTDP), which produced 13 members of this year’s draft class. Peterson says the chatter among the former American teammates added to the excitement of the day.

“It’s such a cool experience to talk to all these guys after you get selected,” he says. “I know [there was] a lot of FaceTimes and stuff from family and friends.”

With the NHL keeping all draft operations remote because of the COVID-19 pandemic, Commesso spent his draft day at home in Norwell, Mass., while Tuch, whose home is in New York, and Peterson, who’s from California, gathered with family at hotels in Boston. Commesso says much of the day was spent on video calls.

“The [Blackhawks] called me, and I got to talk to everyone over the phone,” he says. “Five minutes after that, we had a Zoom-style press conference with a local news station.

“It’s definitely a little different than being in person, but I still enjoyed it.”

BU head coach Albie O’Connell (CAS’99) says he was impressed by the way his players reacted to such a strange draft experience. “It was a pretty wild day,” he says. “I’m proud of those guys and what they did and how they handled it.”

The trio also had the support of their BU teammates throughout the day. Tuch says some of them were even sharing their encouragement in the middle of their workouts. “Some guys were on the bike or on the training tables watching, and they’re sending us videos, so it was pretty cool,” he says. “They’ve been really supportive through the last couple of weeks.”

With this year’s draft moved from from June to October, the big day was on the players’ minds for months. Peterson says he is excited about moving on to what’s next in his hockey career at BU.

“It’s really relieving to get that weight lifted off our shoulders,” he says. “Now we can focus on things ahead, like the BU season that hopefully is coming up soon and other things like that.”

All three Terriers have high hopes for their first BU season. Commesso spent the 2019-2020 season as the primary goaltender of the USA U18 team, posting the second-best goals-against average in team history and setting a mark of 2.05 with a .920 save percentage in 30 games.

The 6-foot-2 netminder says he does his best to keep the game simple. “I’m a goaltender that likes to stay calm and simplify my movements as much as possible,” he says. “I think that helps my teammates a lot too, knowing that I’m calm and that they can trust me.”

O’Connell speaks highly of Commesso, saying his poise has been evident in his first weeks with the Terriers. “He’s well beyond his years in his approach and his demeanor, and he’s definitely got a ton of talent,” the coach says. “He makes a lot of hard saves look easy, at least from what we’ve seen in practice.”

In addition to providing strong goaltending play, Commesso brings a lifelong BU connection to the ice—having grown up as a fan in Norwell.

“I live so close, and I’ve always gone to BU games as a kid, worn their hats and worn their jerseys to the games,” he says, “When I was offered, it was such a surreal feeling.”

On the attacking end, Tuch looks to expand on the 25 goals and 28 assists he put up in 95 games with the USNTDP. A native of Baldwinsville, N.Y., Tuch says he likes to use his body—he’s six feet, two inches, and a touch over 200 pounds—to challenge defenders.

“I think I’m a big power forward that has a heavy shot and has kind of a grittiness to his game and gets in players’ faces,” he says. “I think I can use my speed as an effective part of my game.”

O’Connell says Tuch has the strength and skill to be a danger among the Terrier forward group. “He skates well and he’s tough and he’s physical,” he says. “He’s got the ability to make an impact on the score sheet and physicality-wise.”

Peterson presents a skill set similar to Tuch’s, threatening opponents with his 6-foot, 4-inch frame. The Roseville, Calif., resident tallied 54 points in two seasons with the USNTDP, between the U17 and U18 teams, providing 38 assists in the process.

“I’m always looking for the open pass—I’m more of a playmaker than a goal scorer,” Peterson says. “I like to use my teammates and my speed to my advantage.”

O’Connell says Peterson’s speed can be a major asset to him and to the team. “He’s got very fast feet, very explosive,” O’Connell says. “When he gets going with his speed and his reach, he’s going to be really difficult for guys to defend.”

Commesso, Tuch, and Peterson didn’t have much time to rest following a chaotic draft day. They are among seven Terriers attending the US National Junior Team Evaluation Camp, held October 8 to 13 in Plymouth, Mich. O’Connell says his team always values the opportunity to send players to battle for a spot on Team USA at the World Junior Championships.

“I think the players take a lot of pride in it,” he says. “It’s obviously nice to have players at BU represent the country.”

When they return to BU, Tuch says, he and fellow Terrier newcomers will be ready to make their mark whenever the 2020-2021 college hockey season begins.

“It’s really exciting to be on campus and be able to practice while these crazy times are going on,” he says. “I just can’t wait for games to start.”

Trio of Terriers Selected in 2020 NHL Draft
0
share this