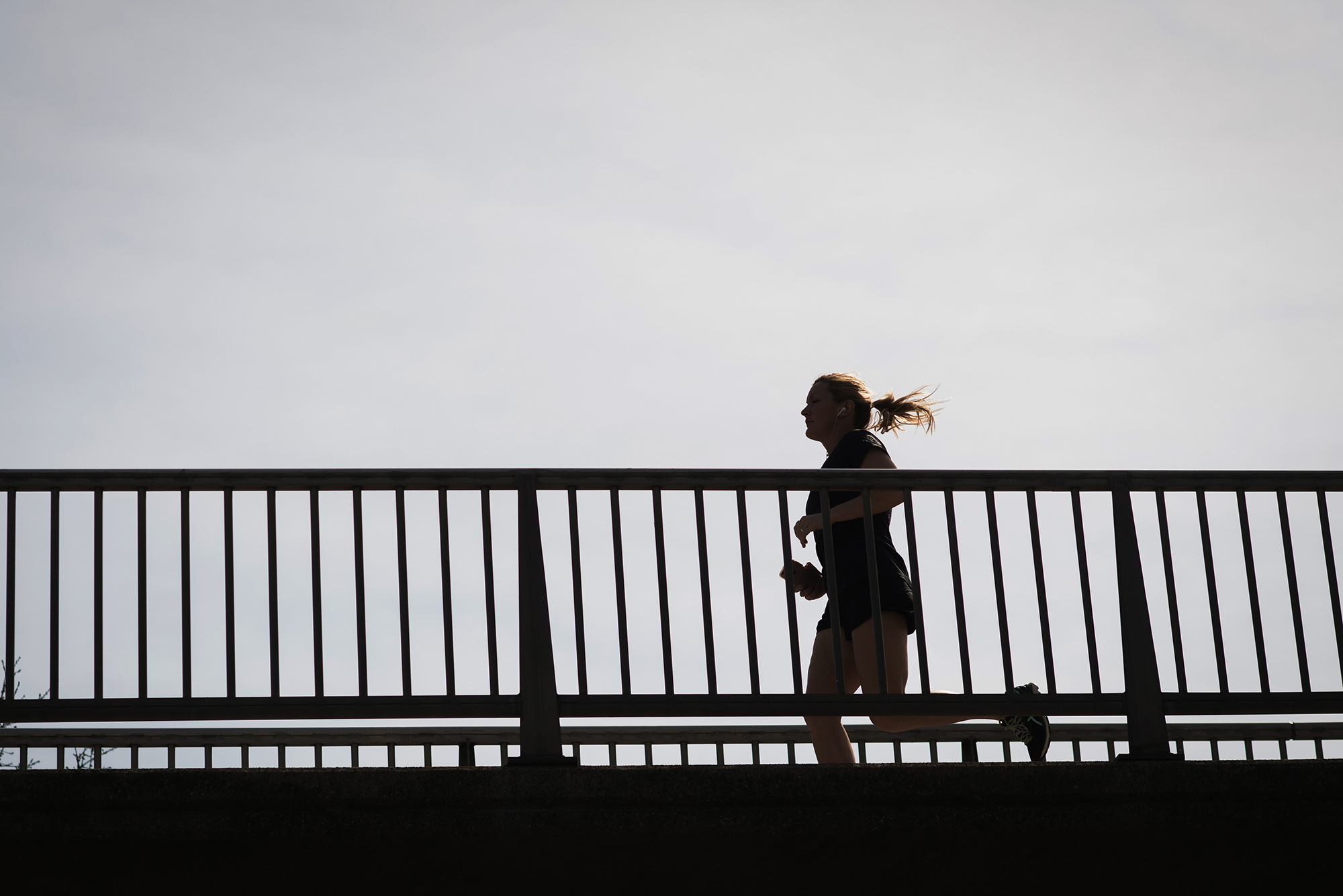 Runners have long enjoyed the routes along the Charles River and its many bridges. These days, a face mask is an essential piece of workout gear. Photo by Jackie Ricciardi

BU Runners on Their Favorite Routes around Boston

Short, intermediate, and longer runs for every kind of runner

Spending time outside is more important than ever this fall because of the COVID pandemic. Fortunately, Boston offers lots of outdoor recreation venues.

And for runners, this is one of the best times of the year to be outdoors. The clear skies, cooler temperatures, and crisp air make for optimal conditions for a comfortable run, whether you’re an avid runner or just looking for a little exercise. With that in mind, we reached out to three BU runners, asking them for their take on the best running routes around campus. They offer suggestions for those new to running as well as for more seasoned and ambitious runners. Each route is accompanied by a map and easy-to-follow directions. So grab your running shoes and hit the trails. And don’t forget to bring a mask.

Note: All routes described here start and end at the George Sherman Union, but could easily be completed from anywhere on campus. Each route was mapped out with onthegomap.com.

This route winds along the Esplanade and both sides of the Charles River and crosses the Longfellow and BU Bridges, providing dazzling views along the riverbank throughout. Quigley says this route can be expanded north into Cambridge and around MIT to put some extra distance on the loop.

Directions: Cross the BU Beach walking bridge over Storrow Drive and run east along the path until you reach the MIT Bridge (aka Harvard Bridge, Mass Ave Bridge, or “Smoot” Bridge). Cross the bridge on the sidewalk and return to the path on the other side, running west until you hit the BU Bridge. Cross it on the sidewalk and turn left on Comm Ave, where a short jog will get you back to your starting point.

This route cuts through South Campus to the Riverway, a series of walking paths that surround the Muddy River, part of what’s known as the Emerald Necklace, a string of six parks designed by celebrated 19th-century landscape architect Frederick Law Olmsted. Quigley says this area is a bit of a hidden gem; it’s adjacent to BU’s Fenway Campus, making it a great place for a peaceful jog, with plenty of vibrant fall foliage along the way.

Directions: Run east briefly on Comm Ave and then south on St. Mary’s Street, crossing over the Mass Pike and turning left along Park Drive through BU’s South Campus. Stay on the right side of the street until the entrance to the Riverway’s running paths on the right. Run along the path until you reach Brookline Avenue, where you should cross and turn back along the other side of the river. The path will end where you entered, and you can take the same route back to BU.

This route southeast of campus combines city sidewalks and nature. It takes you along the Back Bay Fens and the Fenway neighborhood. Quigley says if you’re looking for Boston landmarks, you’ll find plenty here: Fenway Park, the Fenway Victory Gardens, Kenmore Square, and more.

Directions: Make the short jog east on Comm Ave until you reach St. Mary’s Street, where you cross the Mass Pike. Then take a left and run south along Park Drive. Staying on the right side, Park Drive becomes Fenway; continue until you find the running paths on the left just beyond Avenue Louis Pasteur. Run along the path to the end of the Fens at Boylston Street and take it westbound to Jersey Street. A right turn there will take you past Fenway Park and up to Brookline Avenue, where another right turn will send you in the direction of Kenmore Square. Cross the intersection to Deerfield Street and turn left on Bay State Road to your starting point via the BU Beach.

Frequent runner Cara Mooney (COM’22) recently completed the Boston Marathon course. She and Quigley offer some midrange runs that are sure to get a sweat going.

This is an abridged version of a longer trek coming up later on this list (“Longer routes”). It takes you over the BU Bridge to Cambridge, turns around at Harvard, and returns via the Anderson Memorial Bridge and Comm Ave. Quigley says this route is among the best for West Campus residents, as it meanders through Allston, with plenty of opportunities to either shorten or lengthen your run.

Directions: Run west on Comm Ave and turn right on the BU Bridge, crossing over the Charles River, making a left on Memorial Drive, and joining the running paths along the river below. Stay on the path until you reach North Harvard Street, turning left to cross Anderson Memorial Bridge back over the river and running southwest through the Harvard Athletic Complex. Make a slight right turn on Franklin Street, then left on Alcott Street and right on Mansfield Street. Another right takes you across the Mass Pike via Cambridge Street, and a left at Harvard Avenue sends you to Brighton Avenue. Running east, the road becomes Comm Ave, and you’ll eventually be back where you began.

The Museum of Science route
5.63 miles

This route sticks to the river the whole way, leaving the riverside paths only to cross the river on the Charles River Dam Bridge, Route 28, at the halfway point and the BU Bridge towards the end. In addition to breathtaking views of the city, Mooney says this route gives runners the option of running on asphalt bike paths, sand, or dirt.

Directions: Cross the BU Beach walking bridge over Storrow Drive and run east along the Esplanade, following the river to the third bridge, the Charles River Dam Bridge, which is Route 28. Cross on the sidewalk and turn left back along the river on your run west to the BU Bridge, cross the river back to Boston, and take a left on Comm Ave to end your run.

Scotti Hamilton (Sargent’21), a cocaptain of the BU cross country team, has been keeping fit despite the canceled fall season. He and Quigley suggest a couple of lengthy routes that will test your endurance.

This route follows Comm Ave all the way to the Chestnut Hill Reservoir, loops around, and follows the same road back. Quigley says if you don’t mind rubbing elbows with the BU sports rival Boston College Eagles, the reservoir, which is adjacent to BC, offers a great view of the city skyline.

Directions: Run west on Comm Ave, staying on as it bears left and winds southwest through Brookline and Brighton. At Chestnut Hill Avenue, Comm Ave curves northwest and a walking path splits off towards Chestnut Hill Reservoir, where you can run around its 1.5-mile loop on a gravel path popular with runners. Once you finish your loop of the reservoir, take Comm Ave back to BU.

This route doubles the length of the aforementioned 4.53-mile Harvard route (“Intermediate routes”), passing Harvard on the way from the Esplanade to the Fresh Pond Reservation in Cambridge and back. Hamilton says the cross country team likes this route because of its variety of gravel and concrete paths, as well as for its scenery and frequent dog sightings.

Directions: Head east on Comm Ave, cross the BU Bridge, making a left on Memorial Drive and joining the running paths along the river below. Follow the path until you reach Fresh Pond Parkway, which will take you to Fresh Pond Reservation. Join the running path along the reservoir, running counterclockwise around Fresh Pond until you return to the parkway, which will bring you back to the path on the river. Retrace your steps to return to BU.

BU Runners on Their Favorite Boston Running Routes
0
share this