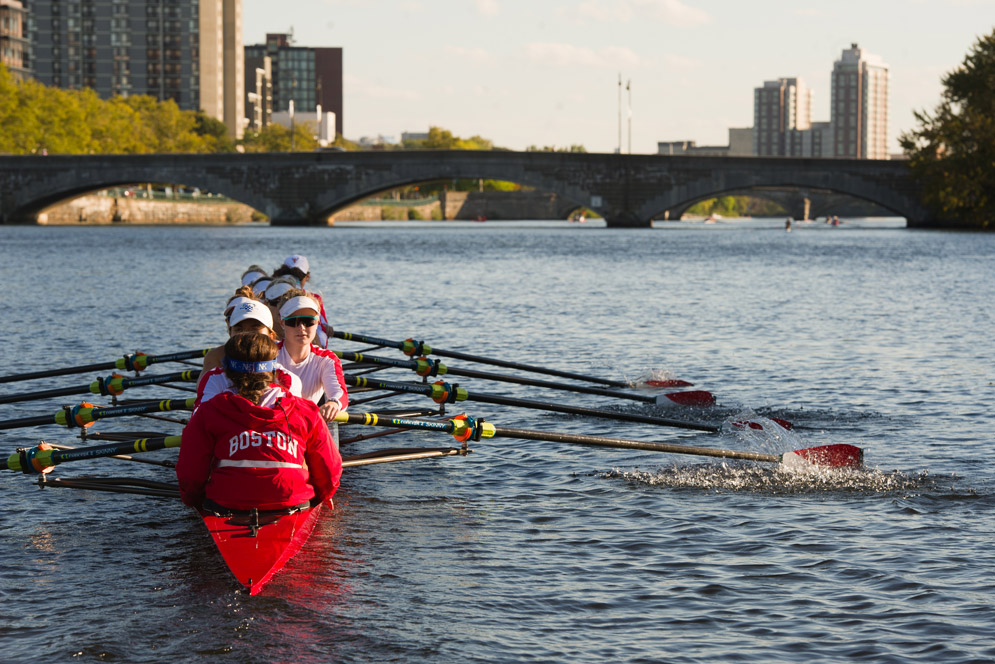 The BU women’s lightweight rowing team will compete, as will the BU men’s and women’s rowing teams, in this weekend’s Head of the Charles. Photo by Cydney Scott

Your Guide to the Head of the Charles

Nearly everyone in Boston has heard of the Head of the Charles, the annual regatta that draws the best crew teams from around the globe for a thrilling two-day spectacle on the Charles River. This year’s event is Saturday, October 19, and Sunday, October 20, and is expected to draw up to 300,000 spectators to the banks of the Charles.

If you’re not a rower, chances are you don’t know much about the regatta. So we’ve put together a primer on what you need to know before you head over the river for this weekend’s festivities.

This is the 55th Head of the Charles, and more than 11,000 athletes from around the world will be participating. There are over 2,000 different boats competing in age brackets ranging from racing clubs to high school boats to college teams. There will be athletes from more than 800 schools rowing along the Charles.

In a head race, teams race on the same course at different starting times and the team with the best time wins. Head races are typically between about three and six miles in length, and the Head of the Charles is a three-mile race, hence the name. Races begin at BU’s DeWolfe Boathouse and the finish line is three miles upstream at the Eliot Bridge in Brighton.

Not just anyone can register for the Head of the Charles. Boats have to qualify for the world-renowned event based on prior success.

How many winners are there?

Awards and medals are based on entries in each event.

Winners of each race receive the honorary title “Head of the Charles.” The awards ceremonies will be held Saturday at 3 and 5 pm and Sunday at 3 and 5 pm, at the Attager Row tent at the Finishing Area Launch Site.

When does BU compete?

Races launch every 15 seconds, so the water will see plenty of action from sunrise to sundown during the two-day event.

Your Guide to the Head of the Charles

Your Guide to the Head of the Charles
0
share this