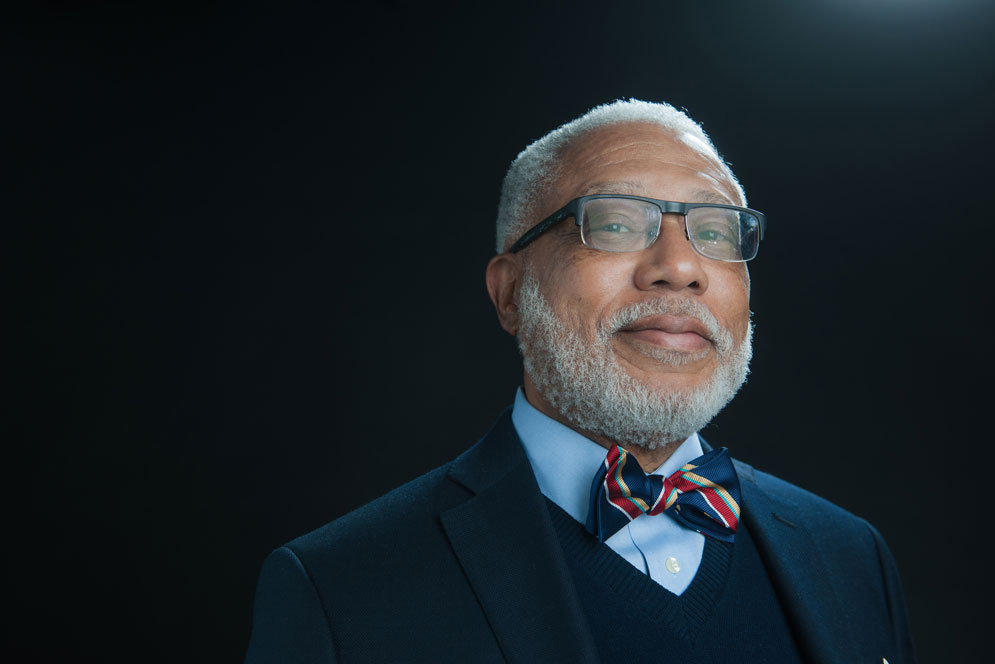 Walter Fluker, a renowned scholar of ethical leadership, is retiring at the end of the coming academic year. Photo by Janice Checchio

Walter Fluker will rest his quest for unicorns—his metaphor for creative moments of ethical discernment—at the end of the coming academic year, when the Martin Luther King, Jr., Professor of Ethical Leadership will retire from the School of Theology.

A well-known scholar of ethical leaders, including Martin Luther King, Jr. (GRS’55, Hon.’59) and Howard Thurman (Hon.’67), Marsh Chapel’s pathbreaking African American dean from 1953 to 1965, Fluker was among those interviewed in the recent PBS documentary Backs Against the Wall, which detailed Thurman’s work in the Civil Rights Movement and his relationship with King.

While at BU, Fluker oversaw the completion of five volumes of the writings and letters of Thurman, who was the first black dean at a predominantly white US university. “I met and studied with Thurman in the late 1970s,” Fluker says, “but had no idea that I would one day embark on this amazing journey as scholar and editor.”

The 850 Thurman writings and correspondence in the volumes, which “are of national historical significance,” reflect how he “tirelessly advocated for dialogue and understanding between faiths,” Fluker says. “He sought to use his status as dean of chapel to bring people together, always acting out of a profound belief that no religion holds a monopoly on truth or holiness.”

“There is probably a right time to retire. I choose rather to think of this moment as a good time to move into another orbit,” he says, “another place where I will have ownership over my time and how to proceed with several creative projects.” Those include helping “emerging leaders to develop lifelong practices associated with character, civility, and community.”

He also plans to write—“prose, poetry, and public commentary”—and to coedit, in the coming year, three volumes of Thurman’s sermons. “Most important, I will be able to devote time to family,” he adds.

Serving as King Professor “had an aura of calling,” Fluker says. “One can never be confident that one is called and by whom, but I am fairly confident that the lots were cast in my favor on this journey and that my time at Boston University was an authentication.”

That time is ending during an American presidency whose ethics are under scrutiny. How does this scholar of ethics assess that climate? “Donald J. Trump represents the nostalgic wanderings of an American past that never existed,” Fluker says. “The rise of white nationalism, for sure, is a global phenomenon…based on the residuals of colonial conquest and imperial power—and the insane inquisitions against difference, inclusion, and belonging that have haunted America since its inception.

“The long-term solution is to reexamine what we mean by democracy and what it will take to reinvigorate a spiritual and ethical movement similar to those that animated abolitionists, women’s suffragettes, civil rights activists, and others,” says Fluker, adding a quote from King: “Human salvation lies in the hands of the creatively maladjusted.”

Fluker “has brought honor, teaching excellence, and critically important scholarship to the King Professorship,” says Mary Elizabeth Moore, dean of STH. “Students have valued his course in social ethics and ethical leadership and his mentorship in their degree programs and life journeys.”

Moore also cites his books on the traits of ethical leadership, Ethical Leadership: The Quest for Character, Civility, and Community (Fortress Press, 2009), and the history and future of the black church, The Ground Has Shifted: The Future of the Black Church in Post-Racial America (NYU Press, 2016).

Beyond his teaching and scholarship, Moore says, Fluker “has been a friend, wise leader, collaborator, community-builder, and grace-filled influence. The School of Theology and BU will miss Walter terribly, and we are pleased that he will continue half-time in the next academic year,” during which time the school will search for a successor.

Fluker earned a BA from Trinity College and a divinity degree from Garrett-Evangelical Theological Seminary.

There are 2 comments on Walter Fluker, MLK Professor of Ethical Leadership, to Retire after Coming Academic Year