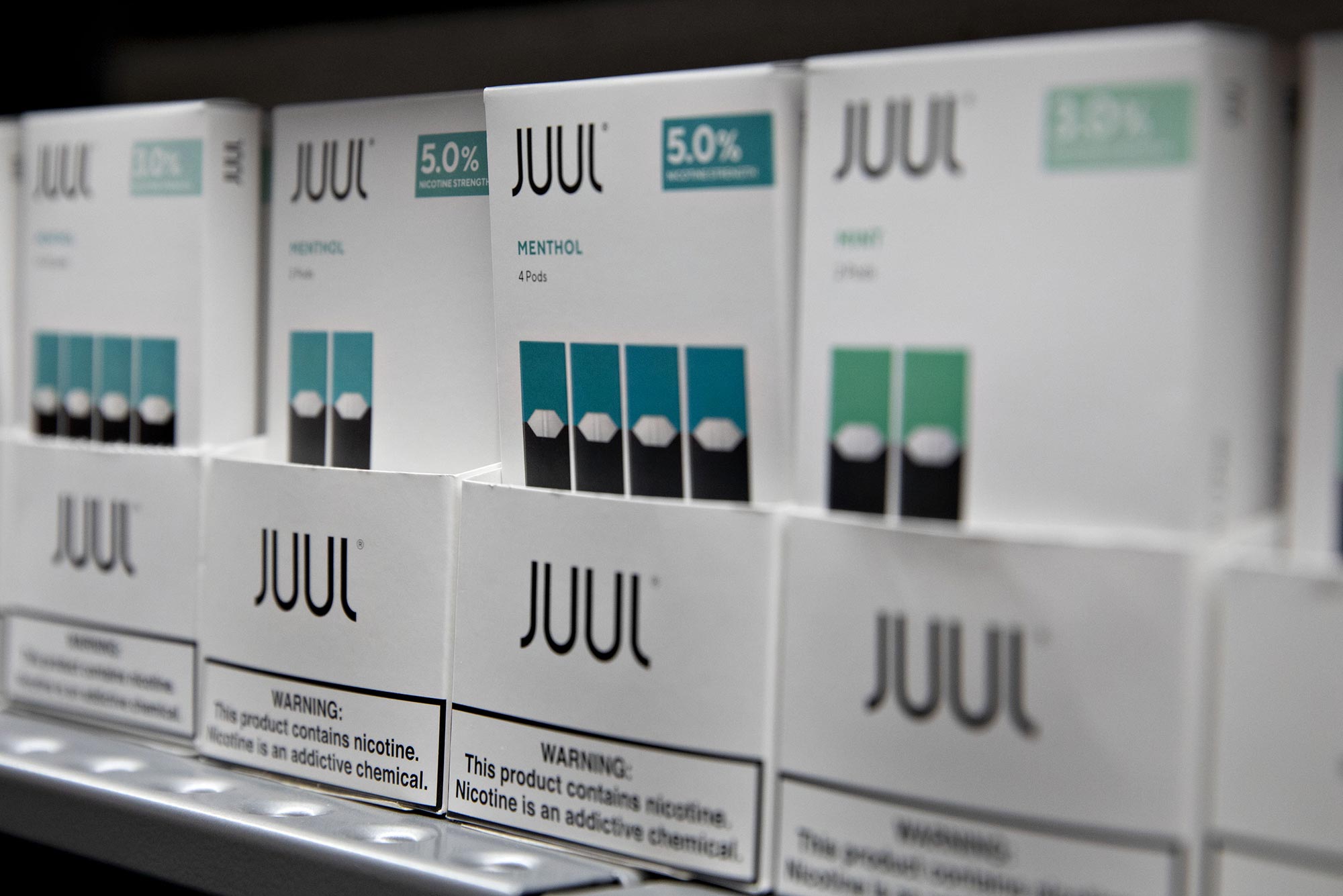 The Massachusetts legislature passed a bill November 20 that would ban all flavored e-cigarette and tobacco products, including menthol, if it’s signed into law. Photo by Daniel Acker/Bloomberg via Getty Images

Why Is Menthol So Addictive to Vapers?

Amid flavor bans, menthol has always been protected—until now

Scan the cigarette display behind the counter at any convenience store and your eye will be drawn toward a raft of sea-foam green and ice-blue cartons and cartridges. Certain associations drift to mind—minty freshness, an ocean breeze, the medicinal comfort of a cough drop. Welcome to the soothing world of menthol, the preferred flavor of American smokers.

In the national debate about whether to ban vaping and the health risks of flavored e-cigarettes (President Trump hosted a meeting November 22 with vaping industry officials and medical experts), menthol is frequently right smack in the middle of the argument. Companies seem to value this seemingly innocuous flavor above all the others.

On November 20, the Massachusetts legislature passed a bill that if signed into law would make the state the first in the nation to ban all flavored e-cigarette and tobacco products, including menthol. It was a noteworthy step, because for decades menthol’s entrenched popularity gave it cover from efforts to regulate it.

In 2009, Congress enacted the Family Smoking Prevention and Tobacco Control Act, which gave the Food and Drug Administration (FDA) regulatory power over tobacco products and banned all flavored cigarettes—with one significant compromise: menthols could remain on the market. Even as overall cigarette use has fallen over time, menthol cigarettes remain enduringly popular, representing 35 percent of total industry sales.

Why? What is it about menthol?

Naturally found in peppermint and spearmint plants, menthol is a chemical compound with anesthetic and cooling properties. Since the 1920s, companies have been adding synthetic menthol to tobacco and cigarette filters to make their products more appealing.

As a market, menthols have shown a remarkable resistance to quitting. Those who start with menthols—they’re still smoking.

“It’s easier to start smoking menthol cigarettes because the draw is not as harsh,” says Stine Grodal, a Questrom School of Business associate professor of strategy and innovation. The so-called smoother experience—much touted in advertising—allows smokers to take longer draws and inhale smoke more deeply into their lungs, resulting in a stronger nicotine addiction.

“As a market, menthols have shown a remarkable resistance to quitting,” Grodal says. “Those who start with menthols—they’re still smoking.”

In other words, menthol makes it easier to start and harder to quit.

And with more than 2,000 reported cases of vaping-related respiratory illnesses nationwide (among them a 17-year-old boy who underwent an emergency double lung transplant) and 39 deaths—3 in Massachusetts—there is a genuine public health furor and intense scrutiny of America’s youth vaping epidemic.

Last year’s National Youth Tobacco Survey, conducted by the FDA  and the Centers for Disease Control and Prevention (CDC), reported a stunning 78 percent increase in the number of high school students using e-cigarettes from 2017 to 2018. This year’s survey, published in November, reports that 4 million high school students (27.5 percent) and 840,000 middle school students (10.5 percent) said they had used e-cigarettes in the last 30 days. Close to a third of those students cited the availability of flavors like fruit, mint, and menthol as their reason for vaping.

The exclusion of menthol from the 2009 federal ban has been particularly harmful to children, because menthol’s milder draw is widely seen as a gateway to long-term smoking. Although youth cigarette use is declining, e-cigarettes use by high school students has risen dramatically, with menthol and mint ranking as the second most popular flavors, after fruit. Massachusetts legislators included menthol cigarettes in their statewide ban, fearing that in the absence of flavored e-liquids, kids could turn to menthol cigarettes.

They’re right to worry. According to the CDC, 54 percent of smokers ages 12 to 17 use menthol cigarettes. That number jumps to 70 percent among African American youth who smoke. (Menthol is overwhelmingly popular in African American communities, where 82 percent of smokers use menthol cigarettes, in large part from aggressive decades-long marketing in black neighborhoods.)

Pulmonologist Hasmeena Kathuria, a BU School of Medicine associate professor, sees the ban as a potential game-changer in stemming the tide of new vape users. “We know the reason adolescents use e-cigarettes is because of the flavoring, so this is an important step,” says Kathuria, who also supports the proposed 75 percent excise tax on e-cigarettes and age-restricted access. “Anything that makes tobacco products and e-cigarettes inconvenient to adolescents is a big win.”

Opponents of the law—mostly vape shop and convenience store owners—argue that the ban will drive customers across the border to New Hampshire and could shutter many small Massachusetts businesses. The New England Convenience Store and Energy Marketers Association estimates that Massachusetts would lose $250 million in sales and taxes from a ban on menthol and mint smoking products.

Meanwhile, the biggest criticism of the proposed legislation by anti-smoking advocate Michael Siegel, a BU School of Public Health professor of community health sciences, is that it doesn’t go far enough. “The law bans the sale of all e-cigarettes, except at 21-and-over smoking bars,” he says. “But it exempts [combustible] cigarettes, meaning those can still be sold at gas stations, convenience stores, and places where kids can easily get them. This is the number one preventable cause of death in the state of Massachusetts, and the legislature is basically saying, we don’t want our kids to get their hands on a cherry vape, but we don’t care if they buy Marlboros. From a public health perspective, that’s absolutely insane.”

Why Is Menthol So Addictive to Vapers?

There are 2 comments on Why Is Menthol So Addictive to Vapers?

Why Is Menthol So Addictive to Vapers?
2
share this